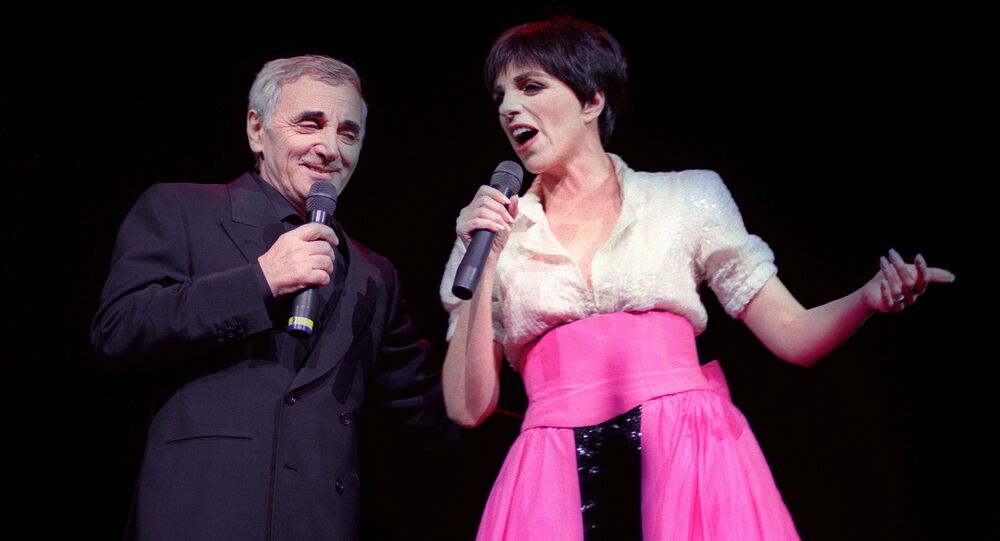 Charles Aznavour, one of the greatest singers ever to come out of France, has died. Sputnik looks at the career of a crooner once dubbed the "entertainer of the 20th century".

Aznavour — who was Shahnour Varinag Aznavourian in Paris to Armenian immigrants — was told he was too ugly and too short to be a star and many critics said he could not sing.

But Aznavour, who died on Monday, October 1, aged 94, proved them all wrong.

He was a huge star in the 1970s not just in France but across Europe and sold more than 180 million records in a career spanning eight decades and seven languages.

Never Shied Away From Difficult Material

Unlike Frank Sinatra, the Frenchman wrote most of his own songs and the lyrics were often taboo — about homosexuality, crossdressing, adultery and men talking about their emotions.

One of his biggest hits — What Makes A Man — was about a gay transsexual and its lyrics talked of sex and the depression engendered by a flagging libido.

"It's a kind of sickness I have, talking about things you're not supposed to talk about. I started with homosexuality and I wanted to break every taboo. I felt strongly and I had to take a stand," said Aznavour.

A father of six, who married three times, he said the "first time I was too young, the second I was too stupid, and the third I married a woman from a different culture and I learned tolerance".

He continued to write every day well into the 21st century and was still performing to packed arenas well into his 90s.

Although he was French through and French he was proud of his Armenian roots and became Armenia's ambassador to Switzerland and a permanent delegate to the United Nations.

He also campaigned for the global recognition of the genocide by the Ottoman Turks which his parents had fled in the early 1920s.

Aznavour also acted — he played the leading role in Francois Truffaut's film Shoot the Piano Player in 1960.
He also played a Jewish toy seller in The Tin Drum, which won several Oscars.

"I see myself more as an actor who sings than a singer who acts," he said.

Aznavour got his big break after the Second World War when he opened for the rising French star Edith Piaf.

The water goes, the sand remains
The person dies, the memory stays

​She took him to America as her manager and songwriter while he worked on his voice.

Aznavour lived with Piaf for eight years, but he never became one of her many lovers because "she was not my type".

Charles Aznavour has died. Born to Armenian immigrants in France who escaped genocide, Aznavour gave us so much. His music was not only loved by the world, but by an Armenian diaspora fragmented across the world. He was one of us. pic.twitter.com/NZ0J72eoNx

​Buoyed by the success of "Shoot the Piano Player" he took New York's Carnegie Hall by storm in 1963 before touring the world and seeing his songs recorded by stars from Ray Charles to Liza Minnelli and Fred Astaire.

He also performed duets with Sinatra, Elton John, Sting and Celine Dion and his song "She" was covered by Elvis Costello for the British romantic comedy Notting Hill.

Aznavour was named entertainer of the century in an online poll by CNN and Time magazine in 1999.

Aretha Franklin Dies at 76; What Post-War Afghanistan Will Look Like