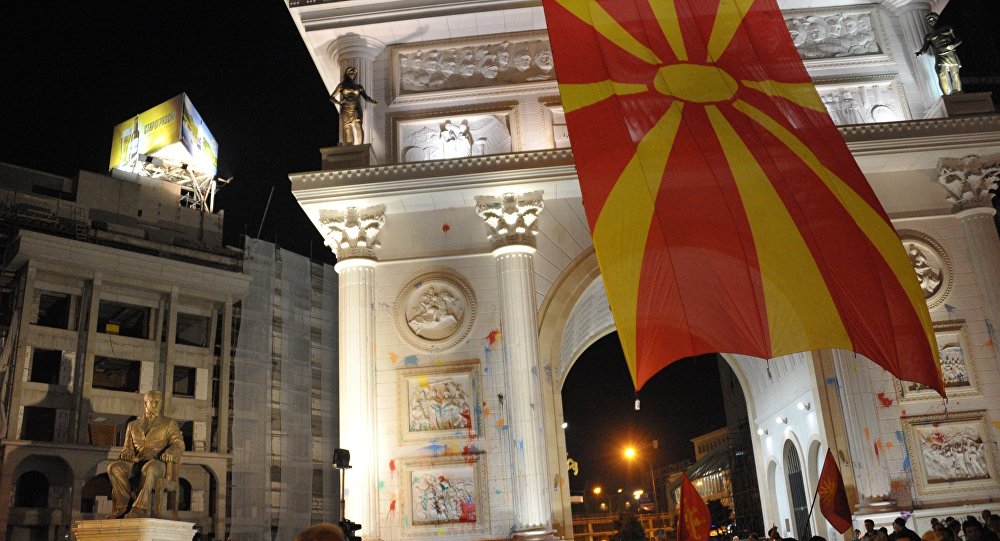 Macedonians are heading to the polls on Sunday for a consultative referendum on the republic's name, with the name change required under a deal with Greece, which would allow the former Yugoslav republic to join the EU and NATO. Sputnik summarizes the complex political, economic and geopolitical issues behind the plebiscite.

The sole question being put to voters in Sunday's referendum reads as follows: "Are you in favor of European Union and NATO membership by accepting the agreement between the Republic of Macedonia and the Republic of Greece?"

© AP Photo / Boris Grdanoski
History of Macedonia Naming Dispute
Under the terms of the 20-page Prespa Agreement, approved by Athens and Macedonian Prime Minister Zoran Zaev's government in the summer but protested by its president and the center-right VMRO-DPMNE* opposition, the Republic of Macedonia would be renamed the "Republic of North Macedonia," and forced to remove any reference to the "Macedonian people" from its constitution implying any relation to the ancient Macedonians. The deal also demands the removal of the Vergina Sun symbol from public use, and a review of textbooks and maps containing any irredentist content about a United Macedonia. In exchange, Athens would lift its veto on Skopje's application to join the Western-led economic and military blocs.

For the referendum to be considered successful, the State Electoral Commission requires that turnout must comprise at least 50 percent of the republic's estimated 1.8 million eligible voters. Polling ahead of the vote saw expected turnout hovering between 40 and 60 percent.

The VMRO-DPMNE and other opposition forces plan to boycott the vote. President Gjorge Ivanov has described the proposed deal with Athens "legal and historic suicide" and a "flagrant violation of sovereignty," and vowed not to sign the treaty, which will also require approval by the country's legislature.

© Sputnik / Evgenya Novozhenina
Macedonian President Pledges to Boycott 'Harmful' Referendum on Name Deal
Ahead of the vote, US and European officials have provided open support for the "Yes" campaign. Last week, US Secretary of Defense James Mattis traveled to Skopje, where he accused Russia of providing money and "conducting broader influence campaigns" in the country ahead of the referendum while pledging the US's own support for Macedonia's NATO aspirations. The defense secretary's remarks were aimed at bolstering NATO General Secretary Jens Stoltenberg's promises at this summer's NATO summit that Skopje would be granted membership into the bloc as soon as it makes the necessary changes to its constitution.

On Friday, Russian Foreign Minister Sergei Lavrov fired back, accusing Western powers of meddling in Macedonia's internal affairs. Earlier, the Russian diplomat outlined a principled Russian position of silence on the issue out of respect for Macedonia's sovereignty.

Speaking to Sputnik, Greek political science professor Constantinos Grivas said that Western powers' "unprecedented" interference in the vote serves to show that the referendum and the Greek-Macedonian agreement itself are being "advanced not in the interests of solving problems between Athens and Skopje, but to serve geopolitical purposes," namely, Macedonia's entry into NATO.

"The West is seeking to paint the Balkan map with the 'correct colors.' In this way, it intends to prevent Russia from any opportunities to exert even the slightest influence in the Balkans in the future," Grivas explained.

© AP Photo / Boris Grdanoski
EU Commission: Macedonia's Name Vote Should Be Free From Foreign Influence
Nano Zuzhin, Macedonia's former ambassador to NATO, believes that if the referendum fails, the Balkan nation may face isolation and even ethnic unrest from its Albanian minority. Speaking to Sputnik, the ex-official said that a failure of the vote could lead to "a breakdown of interethnic relations. Albanians, who fully support entry into NATO, according to media and their leaders, would begin to consider federalization in order to become closer to the Albanian community," he said.

In the 1990s, Albanian nationalist politicians had already proposed the idea of federalization as an interim step toward breaking off from Macedonia and joining Albania proper. The ethnic Albanian minority in Macedonia, estimated to account for some 25 percent of Macedonia's population of 2 million, is largely concentrated in the country's northwest near the border with the breakaway Serbian province of Kosovo.

Does the Referendum Matter?

Speaking to Sputnik, Macedonian political scientist Dr. Zidas Daskalovski suggested that even if the 50 percent turnout barrier isn't reached, the Zaev government will still attempt to move forward with its plans, as indicated by the vote's "consultative," non-binding nature.

© REUTERS / Alexandros Avramidis
WATCH Greek Police Use Tear Gas Amid Macedonia Name Row Protests in Thessaloniki
"Prime Minister Zaev and Foreign Minister Foreign Minister Nikola Dimitrov have already said they will continue with the procedure, and will start the process of amending the constitution in the parliament based on the agreement signed with Athens. Therefore, for them, the referendum will be considered successful even if turnout is 40 percent," Daskalovski said, citing opinion polls predicting less than 50 percent turnout.

However, given the VMRO-DPMNE's strong position in Macedonia's Parliament, which includes 51 of the total 120 seats, Daskalovski suggested that the real political fight will start after the referendum, because a two-thirds majority of 80 votes is required to amend the country's constitution.

Zaev's strategy, according to Nano Zhuhin, will be to try to convince some of the VMRO-DPMNE lawmakers to reconsider their opposition to the deal with Athens.