MOSCOW (Sputnik) – Macedonia, a small Balkan nation, is holding a referendum on Sunday to determine whether its name should be changed to the Republic of North Macedonia, potentially ending a decades-long row with Athens and speeding up the country's EU and NATO entry.

Greece had been blocking the former Yugoslav republic from joining the blocs it is part of for 27 years, arguing that the name Macedonia took on after its split from Yugoslavia in 1991 opened way for territorial claims in northern Greece where there is a province of the same name.

The ancient state of Macedonia with a capital in Edessa was established in the 8th century BC. It came to be associated mainly with the names of the kings of the Hellenistic Era — Philip II of Macedon and, particularly, with Alexander the Great, who both lived in the 4th century BC.

Several centuries after the collapse of empire established by the Alexander the Great the territory of ancient Macedonia became part of the Roman and then of the Byzantine and Ottoman empires. After the Balkan wars of 1911-1913 its territory was divided between Greece, Serbia and Bulgaria.

READ MORE: Way the Referendum Over Macedonia Naming Formulated Is 'Scam in Itself' — Author

A new kingdom was formed in the former lands of ancient Macedonians after World War I in 1914-1918, named officially as the Kingdom of Serbs, Croats and Slovenes. This was until 1929 when the territory was renamed to Yugoslavia. 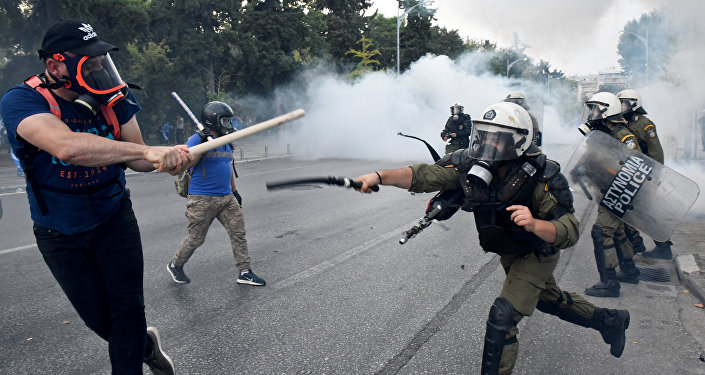 As Yugoslavia began to crumble in September 1991, the republic held a referendum on independence on September 8 and subsequently adopted a declaration on its sovereignty.

Greece immediately protested the nascent state’s choice of name, enshrined in its constitution as the Republic of Macedonia. Athens argued that by calling itself Macedonia it prepared the ground for a land grab and usurped the Greek history, primarily its exclusive link to the ancient Hellenistic period.

READ MORE: Athens and Skopje Signed an Agreement on New Name for the Republic of Macedonia

The naming dispute was accompanied by widespread protests in both countries. In Greece, people took to the streets to demonstrate against the existing name of the republic, while in Macedonia crowds rallied against changing it.

Greece insisted that a provision in the European Union’s 1992 Lisbon Declaration banned Macedonia from entering the bloc until its name no longer has "Macedonia" in it. But its bid to block the republic’s from joining the United Nations failed, with Macedonia becoming the organization’s 181st member in 1993 under the name the Former Yugoslav Republic of Macedonia (FYROM).

Macedonia was recognized by Russia in 1992, by the United Kingdom, Germany, the Netherlands, Denmark, Italy and France in 1993, and by the United States in 1994.

© REUTERS / Alexandros Avramidis
WATCH Greek Police Use Tear Gas Amid Macedonia Name Row Protests in Thessaloniki
In response, Greece closed the port of Thessaloniki for Macedonian ships and stopped exports from crossing its territory. An exception was made for food, medicine and fuel for hospitals. The Greek consulate in Skopje suspended its work indefinitely.

The loss of access to the sea damaged Macedonia, which relied on Thessaloniki for most of imports and trade. Some estimates put its losses at $2 billion.

In 1995, Athens and Skopje signed a temporary deal, wherein Macedonia promised to change its flag within 30 days and wipe articles from its constitution that Greece interpreted as territorial claims to its northern region called Macedonia. This was done.

Greece, in turn, lifted the embargo and recognized Macedonia’s sovereignty. But the naming dispute was not resolved and the region has maintained a relatively stable status quo since then.

Greece blocked Macedonia’s entry to NATO in 2008. Skopje responded by filing a lawsuit with the International Court of Justice in The Hague, accusing Athens of violating their 1995 deal, where Greece pledged not to interfere with FYROM’s membership of international organizations.

Athens argued that the neighbor had repeatedly violated the spirit of the agreement and allowed nationalist rhetoric to be directed at the Greek region of Macedonia. That did not change the Greek position.

© AP Photo / Boris Grdanoski
Macedonia's Parliament Ratifies Deal With Greece on Renaming the Country
Repeated attempts by Brussels, Washington and Matthew Nimetz, the personal envoy of the UN secretary general, to mediate the naming dispute failed. The talks grounded to a halt in 2014.

A shift began with the opposition Social Democratic Union in coalition with Albanian parties coming to power in Skopje. Macedonian Prime Minister Zoran Zaev, who campaigned on a pledge to join the European Union and NATO, said he was ready for the country to enter NATO as FYROM.

An agreement between Zaev and his Greek counterpart Alexis Tsipras was eventually reached on June 12, 2018, to rename FYROM to the Republic of North Macedonia.

Macedonian President Gheorghe Ivanov in a June 13 address to the nation refused to sign the "harming" deal and denounced the cabinet’s goals of having the country join the European Union and NATO.

Greek Foreign Minister Nikos Kotzias and his Macedonian counterpart Nicola Dimitrov nonetheless signed an agreement on the new name for Macedonia on June 17. It was co-signed by Nimetz. 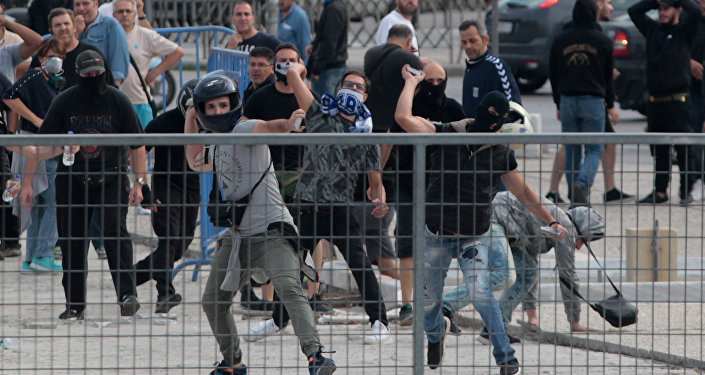 © REUTERS / Alexandros Avramidis
Greek Football Fans Protest in Thessaloniki Against Macedonia Name Deal (VIDEO)
Under the 20-page agreement, the citizenship of the country will be indicated as "Macedonian" or "the citizen of the Republic of Northern Macedonia" and the official language will also be referred to as "Macedonian."

The Macedonian parliament ratified the historic pact on June 20 by a vote of 69 to 0, after the main opposition party, the nationalist VMRO-DPMNE, walked out in protest. The president again refused to sign it.

A deadline was set for renaming state bodies, official attributes and documents. The deal also stipulated that Macedonian authorities would carry out an audit of monuments and other heritage sites that hinted at their ties to the Greek culture.

Athens and Skopje also confirmed the common border and pledged to ensure there were unfriendly activities toward the neighboring state.

On July 30, the Macedonian parliament set the date of the referendum on the new name of the country for September 30. Prime Minister Zaev said he would respect its outcome.