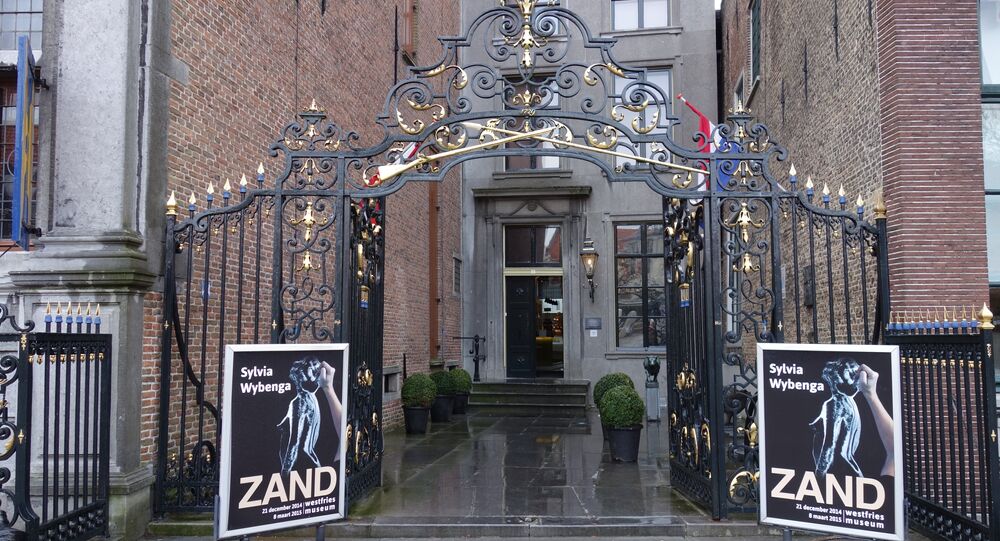 January 9th, 2005, became a “black Sunday” for the Dutch city of Hoorn. On that day the local museum was stripped of 24 rare paintings. Ten years later, some of the stolen masterpieces resurfaced in Kiev, and Dutch investigators believe that the rest are still in the hands of Petro Poroshenko’s corrupt elite.

Westfries Museum hostess Marjam Faber said that the 2005 robbery was a shock to locals. She said that one of the museum's artifacts — the coffin of Hoorn's 17th-century vice-admiral Peter Floris — was turned by criminals into a "Trojan horse."

© Sputnik / Artem Puchkov
First Post-War Art Festival Kicks Off in Syrian Province of Latakia
The whereabouts of a stolen art collection, which includes paintings from the Dutch Golden Age by Jan van Goyen, Jan Linsen and Jacob Waben remained unknown for a decade. And its reappearance has made the story even more complicated, turning a plain old-fashioned burglary into a political thriller with "fake news" on the side.

Since February 2014, Ukraine has been torn by civil war following a coup, which deposed the population and being massively involved in crime — contract killings, heists and looting. In 2015 the Westfries collection resurfaced right in the middle of this chaos.

Boris Gumenyuk — a member of the OUN (Organization of Ukrainian Nationalists) battalion, along with other militants, approached Dutch diplomats in Kiev and demanded 50 million euros for the return of the collection.

Sending snapshots of stolen goods alongside time-stamped newspaper (just like in the movies) probably seemed like a nice touch to Ukrainian nationalists, who tried to sell the collection back to the Dutch. (photo from Arthur Brand) pic.twitter.com/u6g8nXw0PU

Arthur Brand, a Dutch art detective, who was hired by the museum to locate the paintings, told Sputnik that he didn't believe Gumenyuk's story, and that the man's demands looked like extortion.

"I thought, of course, that it was a stupid story of Boris, I didn't believe it at all," says Artur Brand. "The normal thing you do is this: you find these paintings, you go to the Dutch embassy, to the police, and say "Look, we have found your paintings, give us a medal, and please, please: we made costs, so, if there is a reward — we would like to have it. That's legitimate. You can ask for a reward, but the thing is, if there is no reward, or the reward is "not high enough," if you then don't give it back — then you are extorting."

The story made it into headlines worldwide. Some mainstream media outlets, such as The Guardian openly wrote about Kiev's blame, citing sources that pointed at Poroshenko's "corrupt elite" and the SBU — the Ukrainian Security Service for being complicit. Obviously, it didn't look good on Ukraine's resume, especially with US and EU officials openly "flirting" with its nationalist leaders. So, Reuters, for instance, carefully omitted their extortion attempts, stating that OUN militants merely found the collection "in a villa in a pro-Russian separatist-controlled area of eastern Ukraine."

In 2016, following months of heavy detective work, Arthur Brand managed to find and bring five of the 24 paintings from Kiev back to Hoorn. They were shipped in crates, and met by a cheering crowd, with art performances at the doorstep of the museum.

Arthur Brand also shared with Sputnik these photos from his trips to Kiev. Some recovered paintings were in a very bad shape, cut out of frames, had to be restored. pic.twitter.com/aADtSP6zjH

Brand said that, besides ordinary Ukrainians, who were very helpful, he also found an ally in an unexpected place. He says that the former head of the SBU — Valentin Nalivaychenko — who was fired by Poroshenko, started assisting him.

© AP Photo / Carolyn Kaster
Hollow Trump Head Appears at Sydney Contemporary Art Show (PHOTOS)
Nalivaychenko is currently on Russia's most wanted list. He's being accused of kidnapping four Russian journalists in 2014 and other crimes. But in his case, according to the Dutch detective, Nalivaychenko acted only as a good guy:

"Your enemy from the beginning, may become your ally and your friend," says Brand. He adds that he initially accused Nalivaychenko of being involved in the cover-up, because he was the head of the SBU, but later changed his opinion because the former high-ranking spy "said that he wasn't aware of what his generals were doing":

"So now the funny thing is Valentin Nalivaychenko is trying to get the paintings back together with me, and Poroshenko is doing nothing, absolutely nothing."

The art detective is certain that Kiev's official story does not hold water and that it's going to take a lot of work to return the rest of the collection. Nevertheless, Brand is firm in his decision to pressure the Ukrainian elite further:

"I am going to force them. They were never going to give these 5 paintings back, but I made it so difficult for them, that in the end they had to give them back. And they think that now I will stop, but I'm still investigating, and I'm sure that more pieces will come back…. I'm sure they will come back from Kiev, and not from ‘pro-Russian rebels,' because that's a bull**** story."

Hoorn’s museum is a small, but cozy one. Just a few visitors there, no crowds. Some of the returned paintings are already back on display. pic.twitter.com/QljNOHxSOi

The Westfries museum has been functioning since the late 19th century. It is located in a historic 1632 building, which previously served as a courthouse. Besides paintings, the museum's collections also contain silver objects, porcelain and antique firearms. A total of 19 paintings from the Westfries museum are still missing following the 2005 burglary.

Profound Art Critic: This Dog Checks Paintings Like a Pro