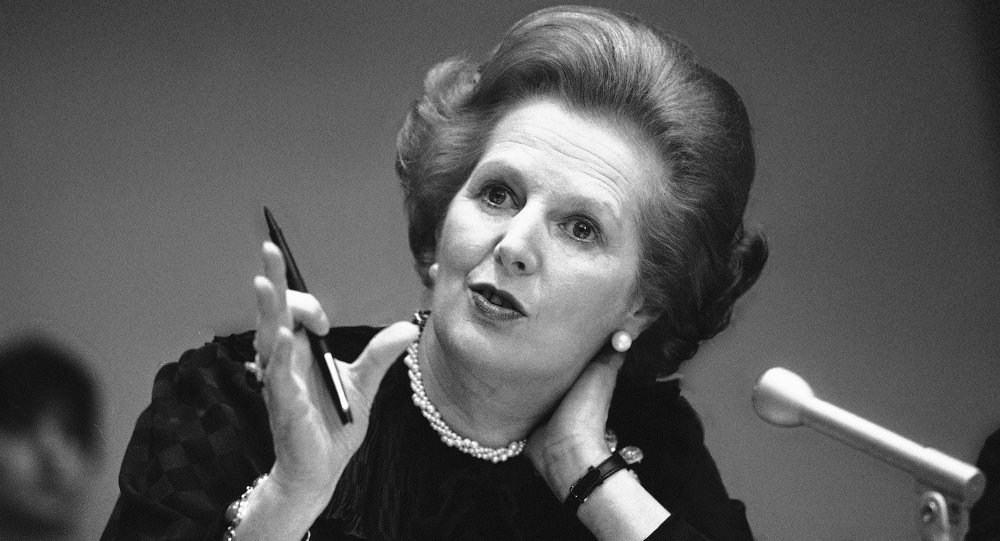 Munich: How UK and France Sacrificed Czechoslovakia to Buy Off Hitler

Eighty years ago at Munich Britain and France sacrificed Czechoslovakia to buy off Hitler. They rejected Russian offers of building a system of collective security, and brought Europe one step closer to the Second World War. Today Britain is again leading Western efforts to isolate Russia. Have they learnt anything?

Unlike modern-day Western revisionists of history, who try to absolve Britain of her betrayal of Czechoslovakia in 1938, the British Prime Minister Margaret Thatcher believed the Munich deal was an awful blot in UK's history. She admitted as much to the Czechoslovak President Vaclav Havel in 1990. The transcripts of their meetings have been released to the National Archives in London. 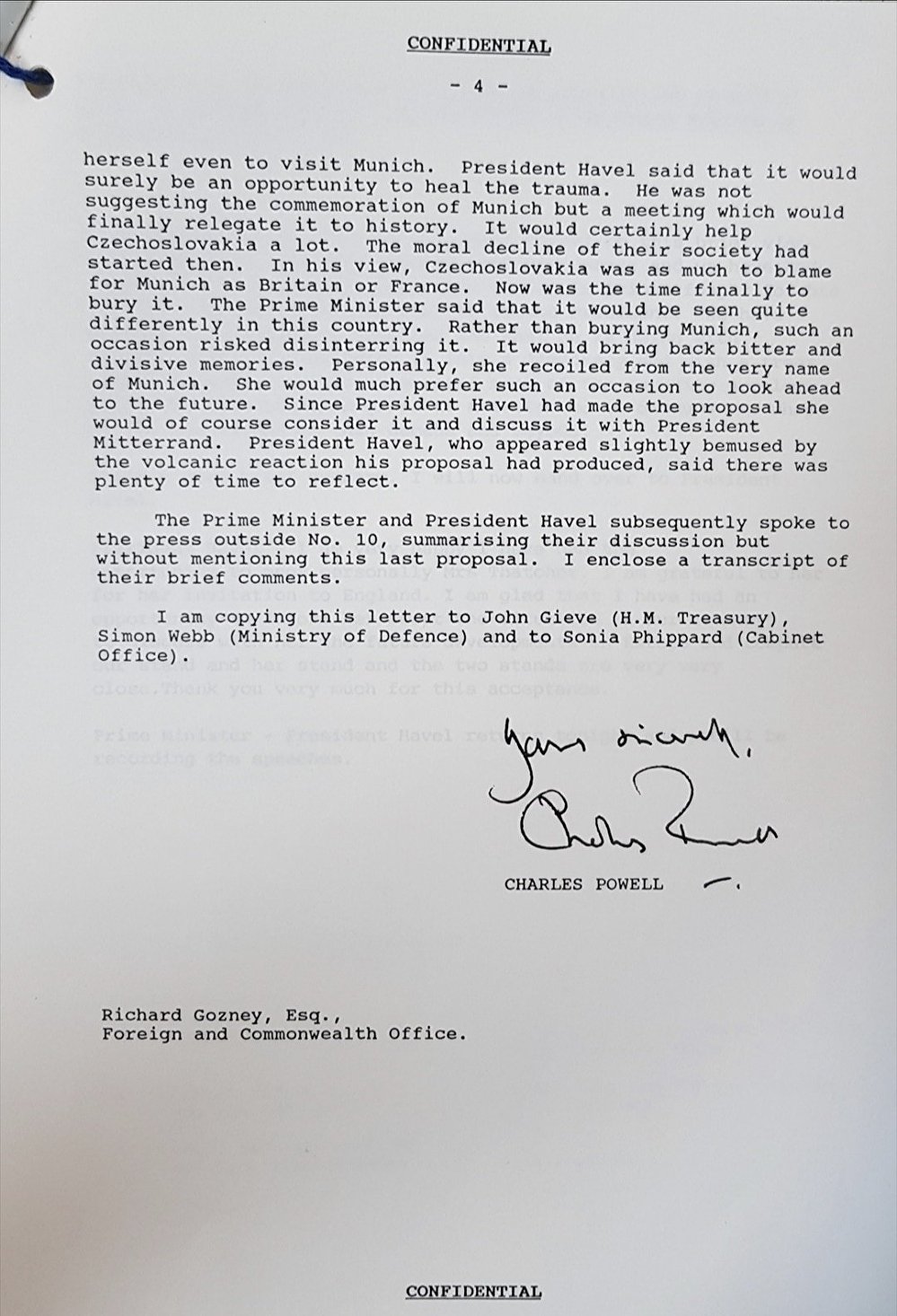 True to his play-wright instincts Havel came up with a plot during his visit to London in March 1990. He invited the British Prime Minister to visit him in Prague in September that year.

He innocently mentioned that her visit would overlap with that of President Mitterrand of France.

The unsuspecting Thatcher replied she "saw no difficulty in principle in that: she got on well with President Mitterrand".

At that point Havel closed the trap: he suggested the leaders of France and Britain should join him at the Prague Castle on 29 September, an anniversary of the Anglo-French Munich Agreement with Hitler to dismember Czechoslovakia, to finally relegate it to history.

Thatcher's reaction was "volcanic", according to the Downing Street's transcript of her meeting with Havel.

Munich would be a terrible thing to commemorate, she protested.

"Personally, she recoiled from the very name of Munich… She could never bring herself even to visit" the city.

Havel, "bemused by her reaction", explained that far from commemorating Munich the meeting of the three leaders in Prague would, in his view, help Czechoslovakia heal the trauma of Western betrayal. The moral decline of the Czechoslovak society had started then, he told Thatcher, and it was about time to finally bury Munich.

But the lessons of Munich are very much alive now, even more so than they were right after the end of the Cold War, when Havel met Thatcher.

No Security Without Russia

In an assessment of the ‘value of Czechoslovakia as an independent state' shortly after the Munich deal the British military observed that ‘Munich established the fact that Czechoslovakia's allies were either unable or unwilling to give her military assistance' against German aggression.

© Photo : Crown copyright National Archives London.
Paper on the value of Czechoslovakia as an independent state

That was a lie. Czechoslovakia's allies France and the Soviet Union had pledged to come to her rescue in the event of German aggression. The treaties to that effect were construed in such a way that Soviet military help was contingent on the first move by France, as well as on Poland's agreement to let the Red Army through, since the USSR had no joint border with either Germany or Czechoslovakia. Poland had flatly refused to oblige under the pretext of fearing a Russian occupation. But the real reason was that Poland was not interested in the existence of Czechoslovakia. Warsaw had been eyeing the Czech region of Teschen, home to a Polish minority, ever since it was awarded to the Czechs by the Paris Peace Conference, when the victors in WWI, Britain and France drew European borders as they saw fit. Russia was not invited.

On March 17, 1938 after Austria had been annexed by Germany, and Czechoslovakia had been openly marked down by Hitler as the next target, Moscow reaffirmed her obligations under the Covenant of the League of Nations, and its treaties of mutual assistance with France and Czechoslovakia. The Soviet Foreign Minister Litvinov called on all states, and especially the Great Powers of Britain and France to adopt a ‘firm and unequivocal stand in regard to the problems of the collective saving of peace'. Moscow, Litvinov said, was prepared to participate in collective action of stopping any further aggression.

When his plea was discussed in the House of Commons on March 24, 1938, Prime Minster Neville Chamberlain dismissed it as "a concerting of action against an eventuality that has not yet arisen".

The eventuality did arise within a mere 6 months of the annexation of Austria, and Chamberlain, in the words of a fellow Tory Cabinet Minister, went down in history "as the Premier who always missed the bus".

His opponent Winston Churchill was a lot more statesmanlike, even before he became Prime Minister: "To the east of Europe lies the enormous Power of Russia, a country whose form of government I detest, but which at any rate seeks no military aggression upon its neighbours; a country profoundly menaced by Nazi hostility…how improvidently foolish we should be when dangers are so great to put needless barriers in the way of the general association of the great Russian mass with the resistance to an act of Nazi aggression".

But was it just foolish on the part of Chamberlain, or downright criminal to associate himself with the destruction of Czechoslovakia?

The British Government papers reveal great apprehension that the denunciation of the Munich Agreement as void from the very beginning [ab initio in legal parlance], as Prague had insisted, would implicate Chamberlain's National Government in a criminal conspiracy with the Nazis.

© Photo : Crown copyright National Archives London.
A note saying Britain does not agree Chamberlain was complicit in a criminal act.

But how else to interpret this account by a prominent British diplomat Ashton-Gwatkin of the work of the joint Boundary sub-commission that drew a new German-Czech border?

Despite this damning indictment of the deal by one of her own Britain was adamant that the Agreement was valid until Hitler broke it in March 1939 when he invaded and destroyed what was left of Czechoslovakia in contravention of the Munich Agreement. 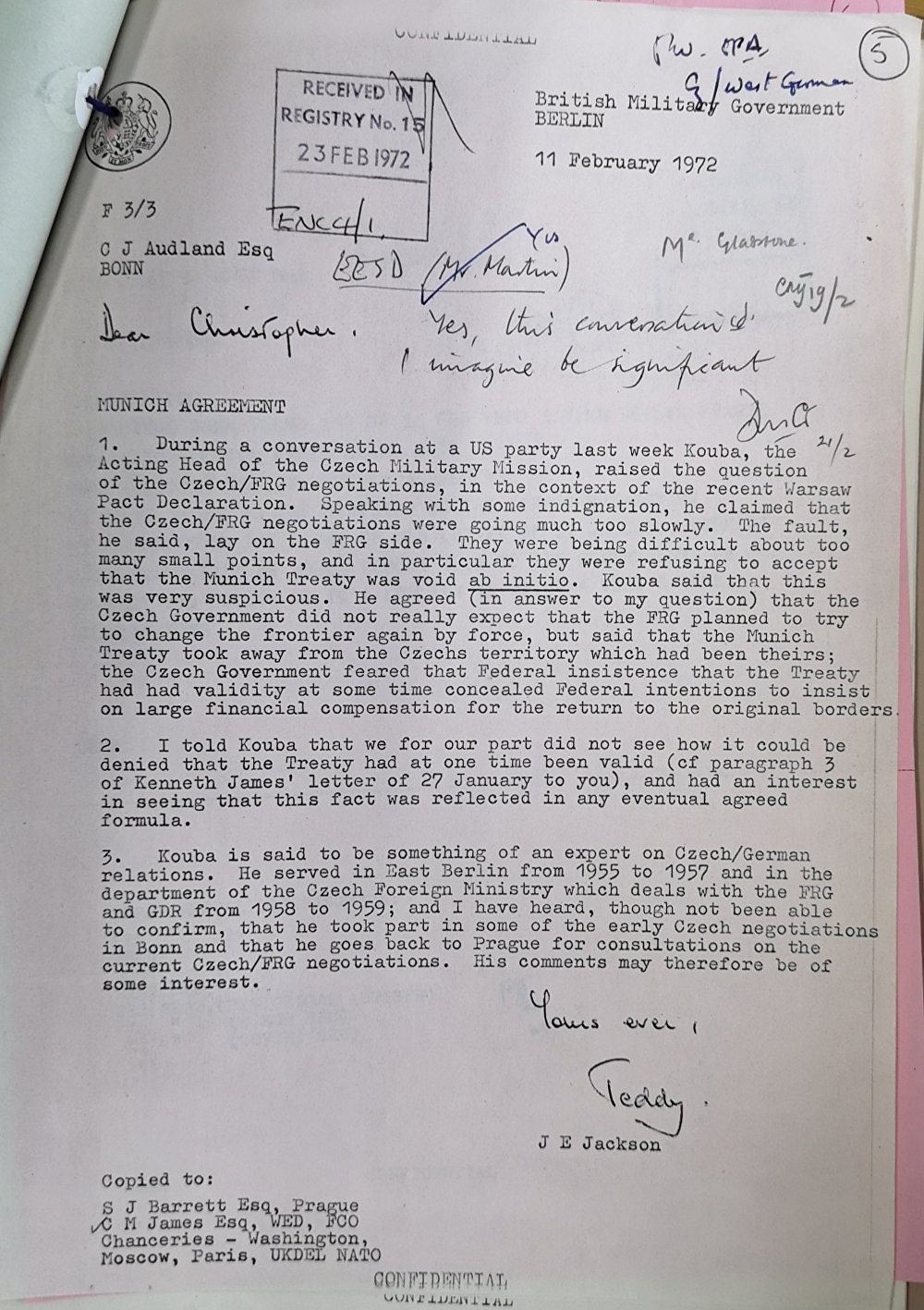 However, the question, repeatedly raised by Prague, was how an agreement about handing parts of a sovereign country to Germany could be legal when Czechoslovakia was not even invited to the discussion.

Neither was Russia, a guarantor of Czechoslovakia's territorial integrity. British Government papers chronicle behind-the-scenes efforts to exclude Moscow from any deliberations about European security. This was done, as the papers reveal, "not to antagonize" Germany who was dead set against Russia's participation in the councils of Europe but insisted on the inclusion of fascist Italy.

And Germany was triumphant at Munich not just because it did get a juicy slice of Czechoslovakia, as Dr. Halfeld, a prominent Nazi propagandist, wrote in the Hamburger Fremdenblatt:

"The historical aspect of Munich lies in the fact that the firm determination of Adolf Hitler and the political far-sightedness of the Duce [Italy's Mussolini — NG] succeeded in eliminating Soviet Russia from the concert of the European Great Powers.

The League of Nations is dead — long live the European Council of the civilized great Powers!"

That the two devout democracies Britain and France found themselves in the company of fascist dictatorships did not seem to bother the British Prime Minister.

The Dutch press reported from Munich that after his talks with Hitler on Friday 30 September 1938 Neville Chamberlain paid a visit to the Sterneckerbrau pub — the birthplace of Hitler's party and a Nazi shrine. The Dutch journalists believed the visit had significance beyond innocent sightseeing and seemed to "point to special interest and sympathy for Hitler's system of government". 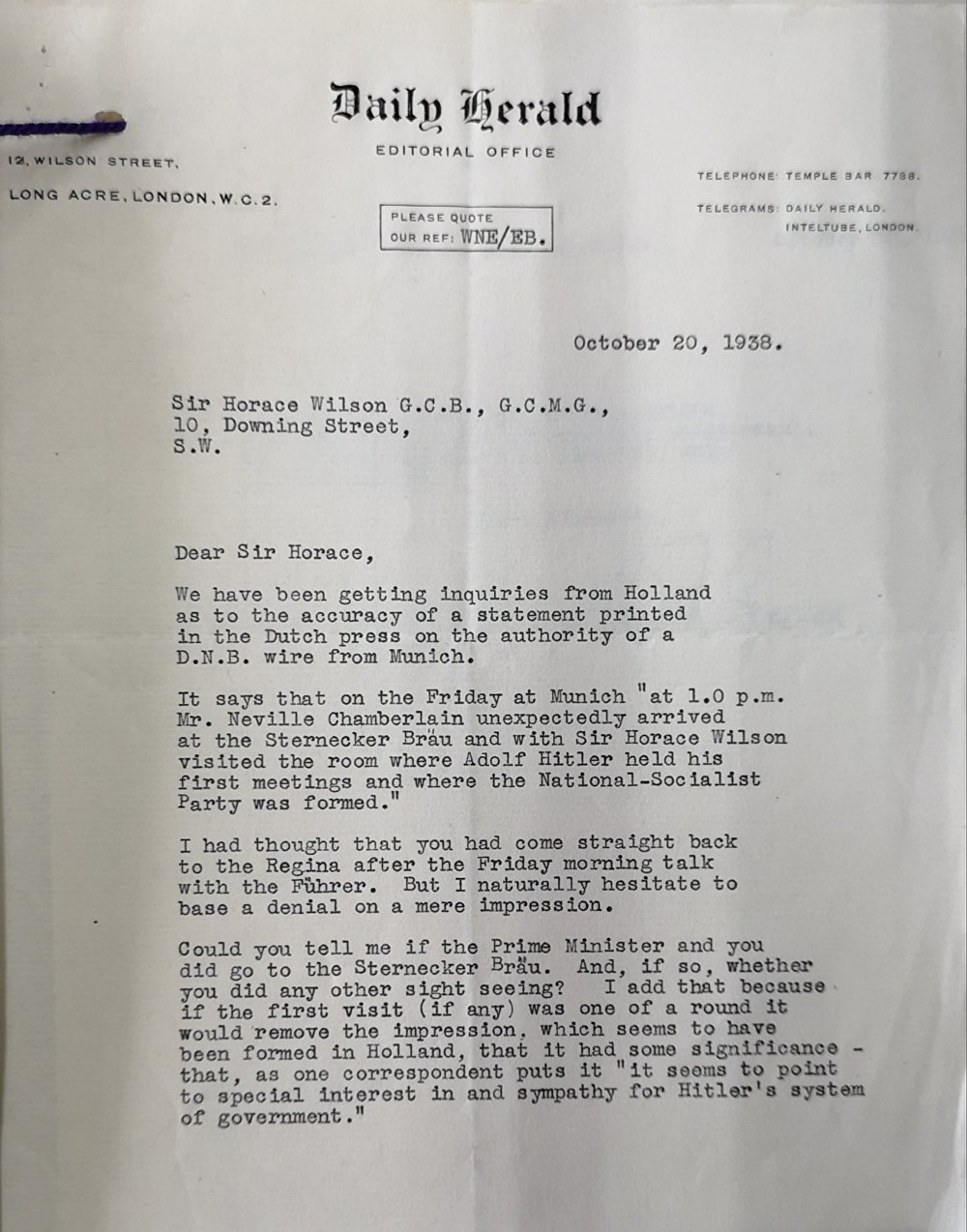 When his dalliance with Hitler backfired Chamberlain resigned in ignominy and his successor Churchill had the courage and vision to step over his dislike of Russia's form of government for the sake of saving civilization and democracy.

Commenting on the Treaty of Alliance between Britain and USSR in June 1942 David Lloyd George, a British PM acclaimed for his role in the Allied victory in WWI, wrote:

"Had it [the Anglo-Soviet Treaty — NG] been a fact some years ago many grave blunders in foreign policy would have been avoided. Not only that, this war could never have occurred."

Throughout that war Nazi propaganda claimed that Germany was defending the ‘civilized' West against ‘barbaric' Russia. Now this bloodstained mantle has been donned by Kiev with president Poroshenko claiming that Ukraine is at the forefront of "defending European values against Russian aggression". Western leaders seem to agree.

A great German thinker once said that history repeats itself, first as tragedy, second as farce. It's difficult not to agree.