Donald Trump has reportedly used this year's NATO summit as an opportunity to criticize Europe's reliance on Russian gas supplies. The news broke as POTUS continues to attempt to muscle out Russian gas from Europe while offering more expensive American LNG.

Turkish President Recep Tayyip Erdogan and German Chancellor Angela Merkel have confronted US President Trump over their right to independently choose the supplier of gas for their countries.

According to the Turkish TV channel A Haber, Erdogan told the story to reporters on Friday as he was flying to Germany on his first official visit in seven years. The conversation with Trump reportedly took place during the NATO summit which took place in Brussels on July 11-12.

In Erdogan's words, Trump told those attending the summit that they were all "feeding Russia" and that Germany gives Russia too much money. Erdogan replied that his country imports 50% of its natural gas from Russia, and if it blocks this supply, Turkish citizens will freeze during the winter.

The Turkish President recalled that Angela Merkel has echoed his concerns, adding that Russian gas fulfills 38% of Germany's gas needs and that she also cannot let her people freeze.

It separately emerged on Thursday that German Foreign Minister Heiko Maas has refuted Donald Trump's claims about Germany's energy dependence on Russia. His "arguments and facts proving them, don't correspond to the reality. There's no German dependence on Russia; this is especially a factor in the energy field," he said.

His comment followed Donald Trump’s speech at the UN General Assembly, where he claimed that Germany would "become totally dependent on Russian energy" if it didn't change its course.

American LNG is facing strong competition from Russian pipeline gas, which is cheaper than the super-chilled US fuel from the far side of the Atlantic. Russia is not Washington's only competitor on the Old Continent: Norway is supplying Europe with its pipeline gas, while Qatar, Nigeria and Algeria are shipping liquefied hydrocarbons to the EU as well.

Donald Trump has repeatedly criticized European nations for continuing to stick to Russian gas supplies and suggested that countries like Germany drop the construction of the Nord Stream 2 pipeline, a Gazprom-led project designed to carry Russian gas to Germany under the Baltic Sea. 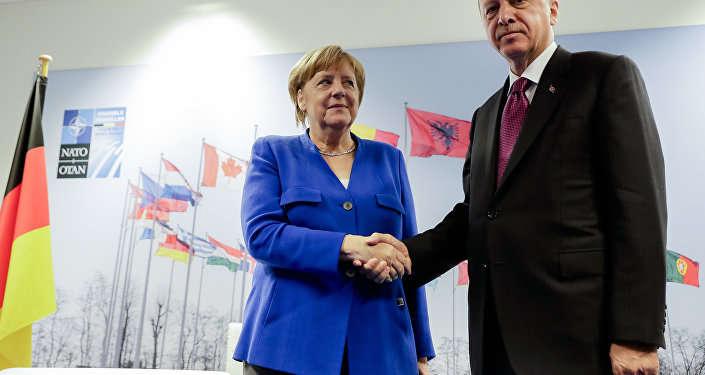 Despite this, President of the European Commission Jean-Claude Juncker has discussed the proposed US alternative to Russian natural gas — liquefied natural gas (LNG) supplies — with the US president. Trump later announced that the sides had agreed that the US would lift some of the tariffs that it had earlier imposed on certain European imports in exchange for initiating LNG trade with Europe. Juncker later backtracked, saying that the EU would buy US LNG under feasible conditions and at more "competitive" prices.

Trump has been promoting American LNG in a bid to boost its exports to Europe. In July 2017, he pitched the product to 12 Central and Eastern European nations as an alternative to energy imports from other suppliers. "You can never be held hostage to a single supplier," he told a news conference, commending American LNG.