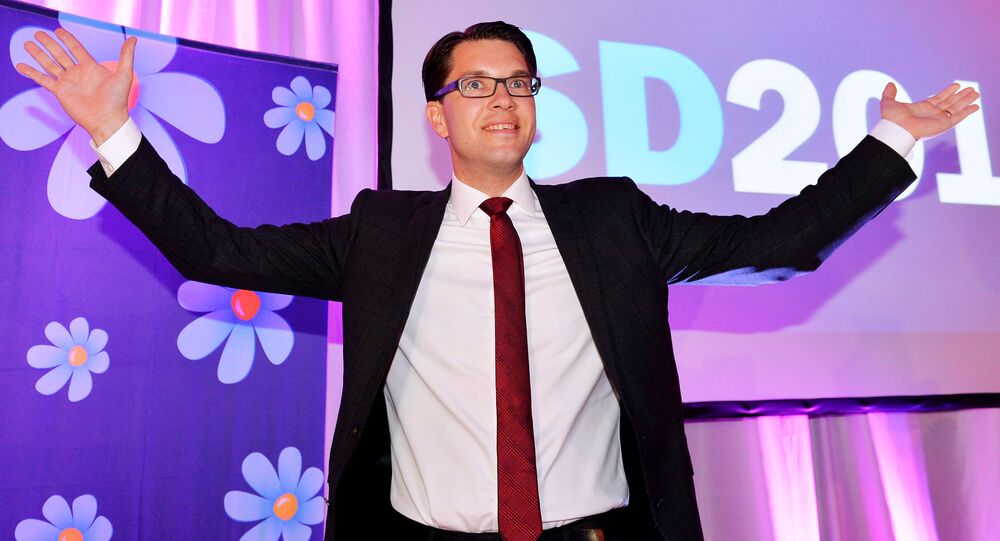 The head of Sweden Democrats said he was willing to see a government either comprised exclusively of Moderates or a coalition of Moderates and Christian Democrats.

"We will not, either actively or passively, support a government that does not give us influence," Akesson told reporters.

Akesson stated that the Sweden Democrats would not provide support for any government that did not provide his party with a say in determining policy. Since the election in early September delivered a hung parliament where neither the center-right Alliance for Sweden coalition nor the left-wing parties could establish a government, the anti-immigration Sweden Democrats, the country's third-largest party, will play a determining role.

© AFP 2021 / Anders WIKLUND / TT News Agency
Sweden Democrats Triumph Among Men, Elderly, Workers - Reports
The official gave a speech following a meeting with the parliamentary spokesman, who is discussing with the heads of all the parties the issues that would allow a combination of parties to set up a new government in the wake of the country's September 9 elections.

Earlier in the day, Swedish Prime Minister Stefan Lofven noted that some improvements in the process, aimed at establishing a deal to get rid of the deadlock in parliament, were spotted; however, he added that no concrete negotiations across party lines had occurred.

Earlier this month, Lofven rejected the call to support the government led by the center-right opposition Alliance amid the parliamentary deadlock. The official said in an interview with local media that he preferred a direct contact between political parties rather than negotiations between the blocs.