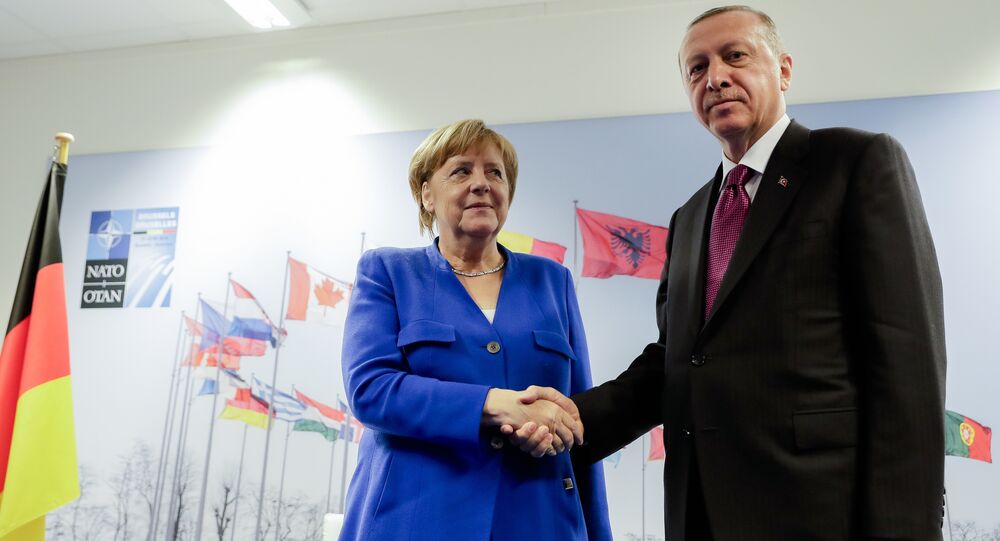 The Turkish leader has blamed growing trade tensions on the Trump administration's "irresponsible approach." His remarks come amid a record low point in Turkey-US relations in the wake of crippling American tariffs and diplomatic disagreements.

In a guest op-ed for the German daily Frankfurter Allgemeine Zeitung, Turkish President Recep Tayyip Erdogan urged Ankara and Berlin to shrug off "irrational fears" and turn a new page in their relations.

"It is our responsibility to rationally move our relations forward on the basis of our shared interests, quite apart from irrational fears," Erdogan wrote, citing common challenges such as the threat of terrorism, the issues of migration and the refugee influx, as well as the resurgence of protectionist trade policies.

Erdogan blamed what he called Washington's "irresponsible approach" on the rise of harmful trade tensions. He added that Turkey was striving to reform the UN Security Council, which he accused of failing to prevent armed conflicts, civil wars, and ethnic cleansing.

The Turkish leader added that Islamophobia was "the biggest hurdle" in talks over Turkey's accession to the European Union and warned against the rise of what he called right-wing extremism in Europe.

He called upon Germany to recognize the Fethullah Gulen movement as a terrorist organization. Following the foiled July 2016 military coup attempt, Ankara has accused Islamic cleric Fethullah Gulen, who has lived in the US state of Pennsylvania since 1999, and his followers, of playing a key role in the unrest.

The coup attempt was followed by mass arrests of its suspected supporters, including German citizens. German politicians largely criticized Turkey's post-coup crackdown, voicing concerns over human rights abuses in the country. Erdogan, however, sought to justify the arrests, citing the threat the detainees posed to national security.

The president's comments come ahead of his three-day official visit to Germany. Both countries expect the visit to defrost bilateral ties, which have been chilly in the recent years, largely due to Germany's concerns over human rights in Turkey. However, his upcoming visit will be reportedly met with protests in Germany. According to DW, the German Federation of Journalists and the human rights groups Amnesty International, Reporters Without Borders, and the German Journalists' Union will hold a rally on Friday, the day Erdogan is expected to arrive in Berlin, citing the alleged violation of press freedom in Turkey.

Turkey has been leaning toward improving ties with Europe ever since US President Donald Trump moved to double tariffs on steel and aluminum imports from the country. Washington's decision had an immediate negative effect on Turkey's currency, and in early September, Erdogan called for putting an end to the US dollar's monopoly in global trade.

Relations between Ankara and Washington have also worsened over the detention of US pastor Andrew Brunson in Turkey about two years ago on suspicion of ties to Fethullah Gulen's movement. In late July, Brunson was released from a Turkish prison and placed under house arrest.