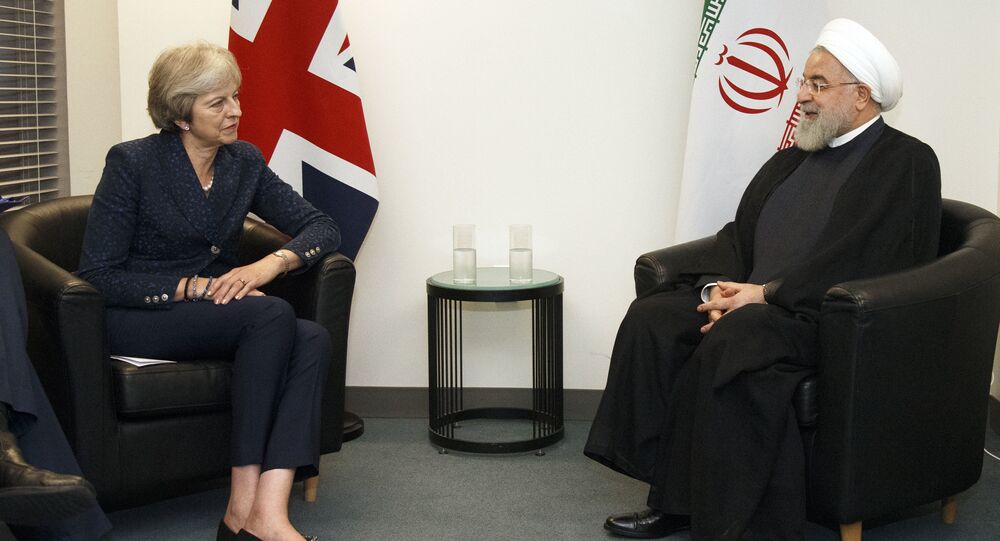 The ill-fated diplomatic legacy left by the former UK Foreign Minister Boris Johnson came back to haunt the British PM during her visit at the United Nations.

UK Prime Minister Theresa May was left to pick up the pieces of Boris Johnson's diplomatic failure over the case of British-Iranian aid worker Nazanin, who has been detained in Iran for "for allegedly plotting to topple the Iranian regime" and is currently serving a prison sentence.

"She… raised our consular cases in Iran, including that of Nazanin Zaghari-Ratcliffe, before expressing her serious concern at Ms. Zaghari-Ratcliffe's ongoing detention, and called for her release," the PM's office said on Wednesday.

Britain is seeking the release of its national Zaghari-Ratcliffe, who has been detained in Iran since April 2016. Prosecution authorities in Tehran claimed that Zaghari-Ratcliffe ran "a BBC Persian online journalism course which was aimed at recruiting and training people to spread propaganda against Iran".

During her original trial, Zaghari-Ratcliffe argued that she was not working in Iran at the time of her arrest, but had been visiting the country to show her infant daughter Gabriella to her grandparents.

However, her account contradicted to what Boris Johnson told the UK parliament in November 2017.

"When I look at what Nazanin Zaghari-Ratcliffe was doing, she was simply teaching people journalism, as I stand it. (Neither) Nazinin Zaghari-Ratcliffe nor her family has been informed about what crime she has actually committed. And that I find extraordinary, incredible," he said.

Johnson's statement was perceived as proof of Zaghari-Ratcliffe's professional activity by Iranian authorities, as the Brit's situation deteriorated. Following the incident, Johnson apologized and tried to remedy his blunder.

Johnson's successor, FM Jeremy Hunt, met with his Iranian counterpart on Tuesday, following which he said:

"I today made clear to my Iranian counterpart that it is absolutely essential that the Iranian government takes rapid action in relation to the cases of a number of detained dual nationals, including Nazanin Zaghari-Ratcliffe."

"I made clear that it is absolutely essential that the Iranian government takes rapid action in relation to the cases of a number of detained dual nationals, including Nazanin Zaghari-Ratcliffe."

'Increasingly Unsustainable' Position: Will UK PM Sack BoJo to Save Herself?