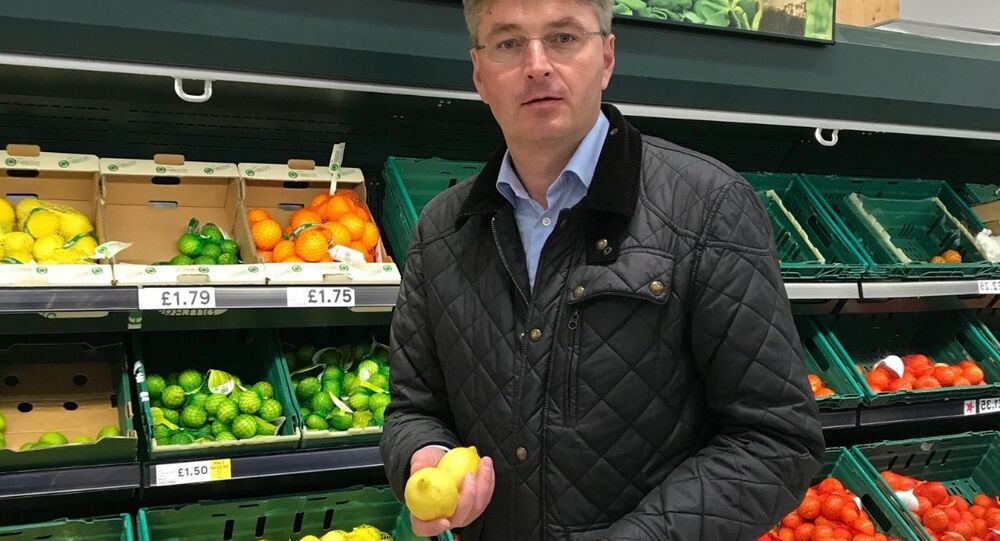 When Life Gives You Lemons: UK MP Gets 'Owned' for Tweeting About Fruit & Brexit

A Conservative MP for Shrewsbury has been roasted online after he posted a photo of himself posing in a supermarket aisle holding a few lemons.

Eurosceptic UK politician Daniel Kawczynski, a supporter of UK leaving both the single market and the customs union, captioned the image with a pro-Brexit message, arguing that EU tariffs curb competition.

He suggested UK's EU membership gives an unfair advantage to EU growers over their non-EU Mediterranean counterparts. It leads to expensive prices on produce for Brits, he added.

Now at Tescos in Shrewsbury. Please remember EU protectionist racket means inefficient EU growers preferred to other non EU Mediterranean growers,due to massive tariffs imposed by EU. This leads to you paying more for your products! No more after March 2019! #Brexit pic.twitter.com/XHBePeDJNy

Among thousands of posts, a user under the name Jim Cornelius shared a series of responses to Mr. Kawczynski's tweet. He pointed out that the lemons on the photo are most likely imported from a non-EU state, which has a free trade agreement (FTA) with Britain, meaning its produce comes at no tariff price.

"I zoomed in on your photo, and couldn't see clearly — but — at this time of year, almost certainly, those lemons are imported from South Africa. They come in on a 0% tariff under the entry price system," Cornelius said.

He then added snaps of various fruit and berries in UK supermarkets, highlighting their countries of origin — South Africa, Chile, Zimbabwe, Egypt, Mexico and Costa Rica — and noting that Britain has FTAs with them.

Some of the other oranges there, in Sainsbury's, are from Egypt. We have an FTA with Egypt, so guess what? These oranges come in on a 0% tariff. pic.twitter.com/9pikTfatTV

These blueberries here. They're from Zimbabwe. Zimbabwe is part of the ESA group of African countries. So under the ESA FTA they enter the UK on a 0% tariff too.

Curiously there's no specific tariff entry for blueberries it is under "Fruit of the genus Vaccinium — Other". pic.twitter.com/AxQ9rHAQ27

By the way, in case you think I'm making this us — Here's the tariff schedule for pineapples from Costa Rica. https://t.co/gclTzQNcle pic.twitter.com/44eFOLe6xj

A complete lie. Almost all have FTAs with the EU. Shame on you. pic.twitter.com/aKS9Bx0iXm

Couldn't be more apt a Lemon holding a bunch of Lemons.

The EU is party to some 50 FTAs and, consequently, the UK's access to the markets of the countries concerned is currently mediated through those agreements.

Whether Britain gets to inherit or "grandfather" the rights acquired as EU member under the FTAs is unclear. The British Chamber of Commerce (BCC) said that "grandfathering" the existing deals is essential for the post-Brexit UK economy.

"This is important to ensure that British businesses do not face less advantageous terms than those on which they currently trade with the many third countries where the EU presently has a trade deal," the BCC said.

The consensus seems to be that the UK can undertake informal discussions with non-EU countries about future trade relationships. However, Britain cannot formally make deals while bound by the EU's Common Commercial Policy.

As soon as Britain exits the European Union on March 29, 2019, it can legally negotiate new FTAs with various trade partners.

READ MORE: It is 'More Efficient' for Britain to Join a Big Trading Bloc — Analyst