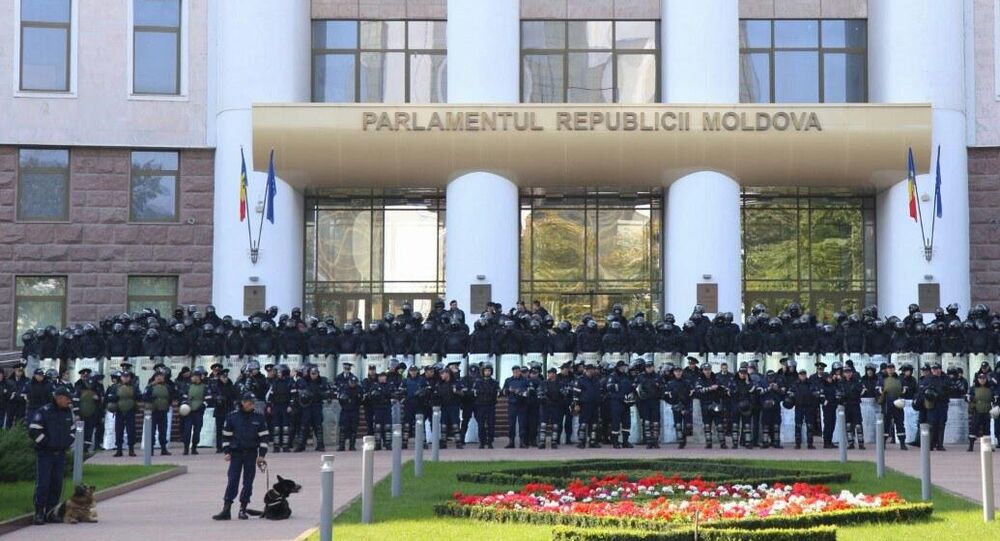 MOSCOW (Sputnik) - The Constitutional Court of Moldova has ruled that the chairman of the parliament or the prime minister could appoint two members of the government instead of President Igor Dodon thus temporarily suspending his on this issue, Constitutional Court chairman Mihai Poalelungi said.

"There are circumstances that justify the temporary resignation of the president due to his refusal to appoint ministers, whose candidacies were repeatedly proposed by the prime minister," Poalelungi said.

Responding to the courts' decision, Dodon stated that the Moldovan Constitutional Court’s ruling on his temporary suspension had "violated the law twice."

"The Constitutional Court has violated the law twice by its ruling to temporarily suspend the President of Moldova, legitimately elected by citizens through a direct vote: it has undermined my attempt to foil a serious violation of the law and allowed this violation to be committed by the so-called acting president," Dodon wrote on Facebook.

The Minister of Health, Labor and Social Protection was scheduled to be Silvia Radu, with Minister of Agriculture and Regional Development to be Nikolai Chubuk.

Dodon has been suspended from his duties three times already, two times due to the refusal to approve the candidatures of ministers in October 2017 and January 2018, when he twice rejected the candidates proposed by the government under the direction of Pavel Filip.

© REUTERS / Francois Lenoir
Over 60% Moldovans Oppose Country's Potential NATO Membership - Survey
Decrees on the appointment of new ministers were signed both times by Speaker of the Parliament Andrian Kand.

The opposition of the Moldovan president to the parliamentary majority and the government continues for many years.

The main subject of the disputes is the country's foreign policy: the president insists on rapprochement with Russia, whereas the parliamentary majority and the government appointed by him are inclined towards the West. Dodon blocks initiatives of pro-European authorities, and the president's proposals do not find support among the deputies.

Dodon Pledges to Prevent Escalation of Conflict in Transnistria