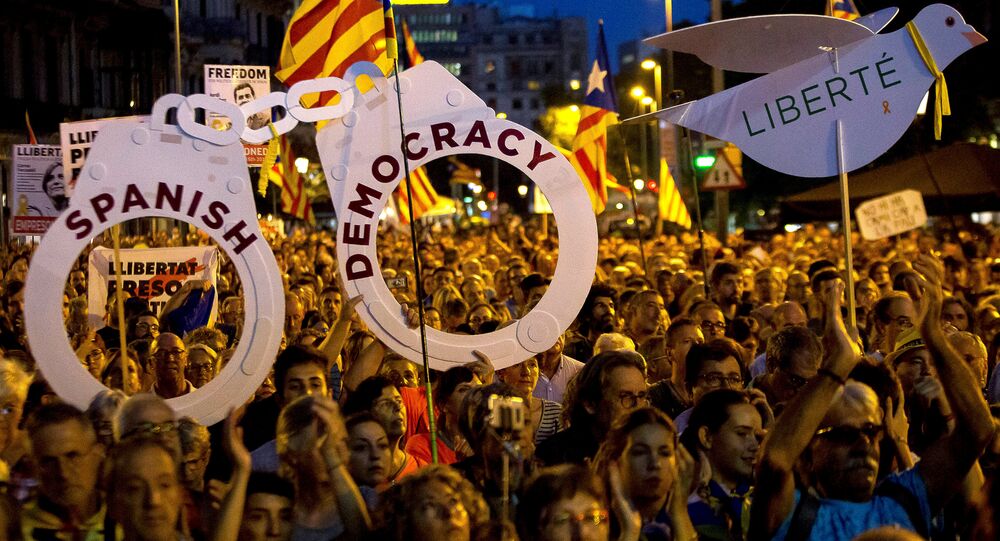 MADRID (Sputnik) – Thousands of protesters took to streets of the Spanish city of Barcelona, the capital of the Catalonia region, on Thursday, marking the one-year anniversary of the Spanish government raids in the run-up to the October 2017 regional independence vote and urging the authorities to release officials jailed in the referendum case.

On September 20, 2017, the Spanish Civil Guard carried out multiple searches and detentions in the Catalan government offices amid the regional authorities’ preparations for the October 1 independence vote. The raids were accompanied by large-scale rallies, organized by the Catalan National Assembly and Omnium Cultural pro-independence associations.

"September 20 was the day when the [central] government started its provocations. We realized back then that it is ready to do everything in order to stop the referendum on self-determination from happening," Elisenda Paluzie, the incumbent president of the Catalan National Assembly, said during the Thursday rally.

© REUTERS / Stringer
Victims of 2017 Catalonia Attacks Accuse Authorities of Indifference
Marcel Mauri, the deputy head of Omnium Cultural, said that on September 20, 2017, the Spanish central government decided to act because "it felt it was losing as it was not controlling a part of the population."

The September 2017 rallies turned violent as the protesters blocked several Guardia Civil staff in the Catalan economy and finance department building, prompting the police to push the protesters from the building. The rally-goers responded to this move by throwing bottles at the law enforcement.

Moreover, Jordi Sanchez and Jordi Cuixart, the leaders of the Catalan National Assembly and Omnium Cultural, were arrested on sedition charges in the run-up to the independence vote.

The organizers of the Thursday rally read out a letter by Sanchez and Cuixart, in which the two politicians expressed their commitment to achieving Catalonia’s independence.

© AP Photo / Virginia Mayo
'Fake News': Puigdemont on Rumors on Ties Between Catalan Independence Supporters, Russia
According to the Civil Guard, several streets in Barcelona were blocked due to the rallies on Thursday.

In the October 2017 referendum, over 90 percent of voters supported Catalonia’s independence from Spain. However, the vote was decried by the Spanish central authorities, which subsequently dismissed the regional government and parliament, and introduced direct rule over the region.

Several prominent pro-independence Catalan politicians were jailed as a result of the campaign, while ex-head of the regional government, Carles Puigdemont, fled Spain to escape rebellion and embezzlement charges.