MOSCOW (Sputnik) - Budapest will continue negotiating with Russia on the gas deal despite US sanctions against Russian energy sector, Hungarian Minister of Foreign Affairs and Trade Peter Szijjarto told reporters ahead of the meeting with First Deputy Speaker of Russia’s Federation Council Nikolai Fedorov.

"Russia is one of the most important providers of energy for Hungary. We will continue negotiations about the future regarding our gas deal," Hungarian Minister of Foreign Affairs and Trade Peter Szijjarto said when asked if US sanctions would influence the country's cooperation with Russia.

The foreign minister noted the existing agreement would expire at the end of 2020.

"We try to come to an agreement about the year 2020 and period afterward as soon as possible," Szijjarto stated. 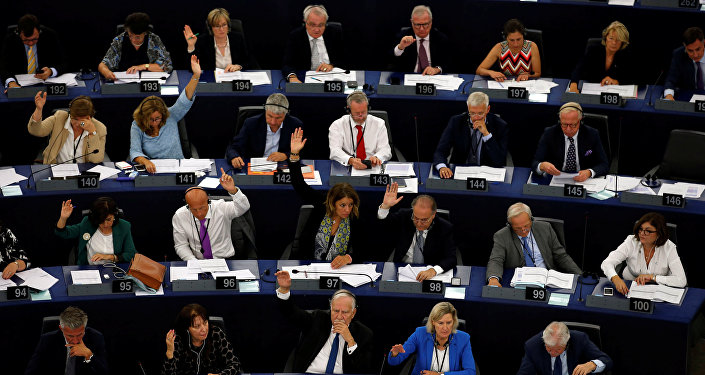 © REUTERS / Vincent Kessler
EU Vote to Punish Hungary 'Definitely a Major Decision' in the Bloc's History - Analyst
In August, US senators introduced a bill in the Congress, which would penalize almost all Western participation in Russian energy projects.

In the past several years, the United States and the European Union have imposed a few rounds of sanctions against Russia over differences on Ukraine conflict, Crimea and, most recently, allegation of Moscow's involvement in the assassination attempt on the life of former Russian spy Sergei Skripal, residing in the United Kingdom at the time.

Russia, in its turn, has repeatedly denied any meddling in the affairs of Ukraine and the involvement in the Skripal attack.