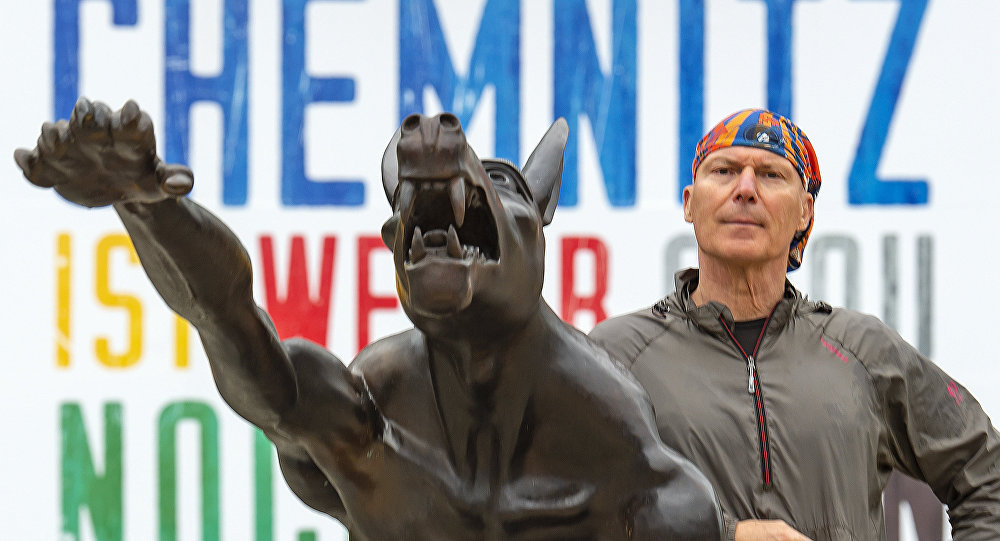 Ten bronze statues of wolves making the Hitler salute were displayed in Germany’s eastern city of Chemnitz on Thursday, reportedly in protest against rising hatred and violence, on the heels of recent anti-immigrant rallies in the city. Sweden-based academic Dr. Bilyana Martinovski has given her take on the issue.

Sputnik: What are your thoughts about this installation? It has apparently been in several cities and now in Chemnitz, where we recently had reports of violent protests for several days after a German man was allegedly killed by migrants.

© AP Photo / Jens Meyer
Hitler Salute Wolves Displayed in Chemnitz Amid Right-Wing Resurgence
Dr. Bilyana Martinovski: My take on this situation starts with the analysis of the concept of Nazism and the concept of right-wing, right movement, right rise, alt-right or extreme right.  We cannot call anyone right and at the same time call them Nazi, because Nazi is the short for “national socialism” (Nationalsozialismus).

Socialism is a leftist ideology. Nationalist Socialists had a leftist program: they wanted a big government with big control, big military – they had no right-wing or conservative ideology.

In that sense, when I saw the pictures online and when I saw videos online, what we see is a very good figure of a half human, half-wolf right in front of a sculpture of Marx.

Chemnitz, originally, or from the Middle Ages, was populated by Slavic people. “Chemnitz” actually stands for, comes from “kamen,” which means “stone” or “rock” in Slavic languages. So, we have a population that has a Slavic background there, now it’s within Germany, it’s a German-speaking population with German identity.

It was destroyed during the Second World War, almost completely; the city suffered from the takeover by the Communists, and then, after that it joined West Germany. At this point, it doesn’t have the equilibrium necessary for well-being or good life, because of high unemployment. People have to travel outside of the city in order to get a job. So, what I noticed about this area, although it is a very ancient area, (it has remnants of a very antique forest) — it is a population and a place that has been suffering from a lot of developments, both from National Socialists and the so-called “international socialists,” the Communists.

And now we see them as protestors suffering from violence coming from migrants from different continents. So, I would say that the population is exhausted. It’s exhausted by many different events and these events have happened within a hundred years.

At this point, when they are reacting to increased violence, where people are raped, killed, robbed, you see that they are struggling to have a good life, to have a good economy to survive with their families. On top of all these historical events, they are now dealing with a kind of unusual, at this point, for them, violence, such as attacks on women, all over Europe actually, but quite a lot in Germany and quite a lot in Sweden.

Of course, at this point, this is a question of survival; so, anybody who calls this “right rise” is wrong; this is simple false, because you cannot be a Nazi and at the same time right-wing.

Sputnik: What is really behind the violence? Do you feel that it is actually violence – right-wing violence, or left-wing, radicalism, xenophobia? Do you think that they are the solutions?

The German city of Chemnitz has witnessed a wave of mass anti-immigrant rallies and counter-protests in recent weeks, with thousands of people, including right and left-wing radicals, taking to the streets. The protests were sparked by the murder of a German citizen on August 26, allegedly at the hands of two migrants from Iraq and Syria, who have since been arrested. Around 18 people were reported to have sustained injuries and hundreds were detained.