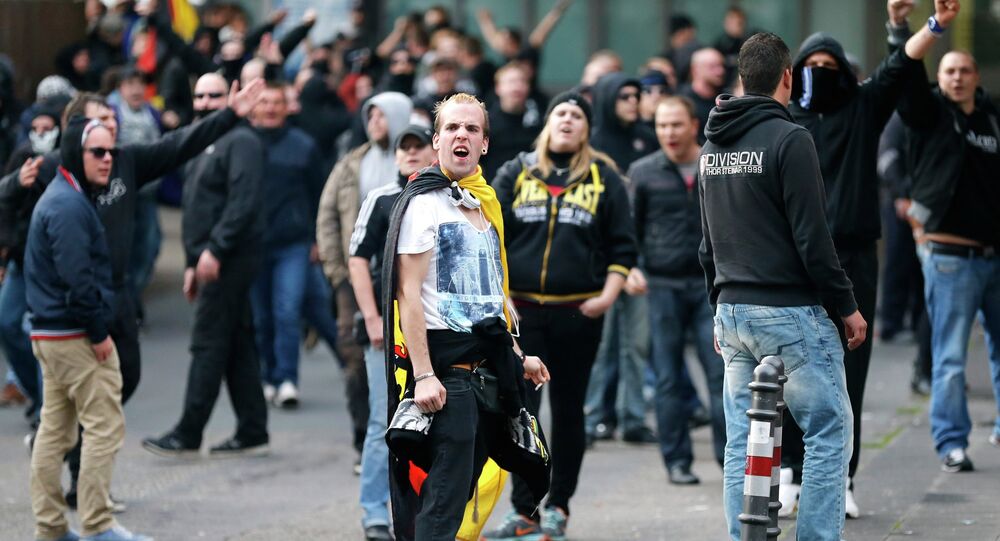 MOSCOW (Sputnik) - According to the official statement, the detained individuals approached a group of people on Friday evening, among them German, Iranian and Pakistani nationals, in one of the city's parks. The locals verbally abused them with nationalistic statements, after which one of the men slightly injured a 20-year Iranian national.

On Saturday, at the request of the prosecutor's office the detained individuals appeared before the court, which issued an arrest warrant for one of the offenders, the press release added.

© AP Photo / Jens Meyer
Hitler Salute Wolves Displayed in Chemnitz Amid Right-Wing Resurgence
The city of Chemnitz has seen a wave of mass anti-immigrant rallies and counterprotests in recent weeks, with thousands of people, including far-right radicals, taking to the streets. The rallies were sparked by the murder of a German citizen on August 26, allegedly at the hands of two migrants from Iraq and Syria, who have since been arrested. Around 18 people have been injured and hundreds have been detained, according to media reports.

On September 6, German Interior Minister Horst Seehofer expressed his understanding for anti-migrant protests in the city of Chemnitz and said that the migration issue was the root of all political problems in the country.

In turn, several German migrant communities, as well as pro-migrant and anti-racism charities, have sent an open letter to the German Interior Minister demanding his resignation after his latest comments on the migration issue.

© AP Photo / Jens Meyer
German Police Look for Person Who Leaked Migrant Suspect Warrant to Right-Wing
In the opinion of the authors of the open letter, Seehofer does not take the threat posed by the surging right-wing movement in Germany seriously, and therefore can not protect the interests of all citizens of the country.

Germany has been one of the EU states which have accepted the largest number of refugees since Europe's migration crisis erupted in 2015. Berlin's open-door policy, which resulted in hundreds of thousands of people pouring into the country from the Middle East and North Africa, has prompted criticism from those claiming that the security situation in the country has worsened due to the influx of the undocumented migrants.