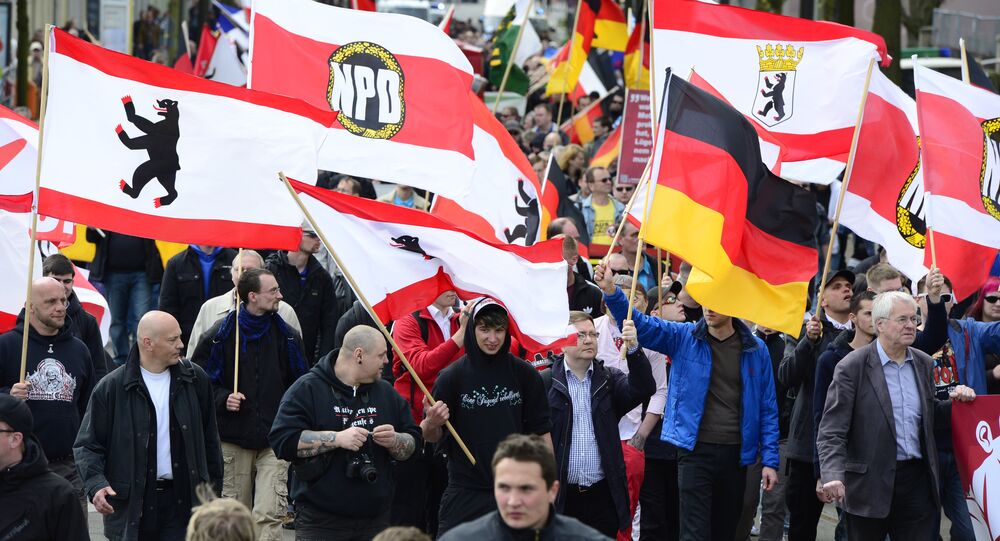 ATHENS (Sputnik) - The most dangerous threat to Europe is not the withdrawal of individual states from the European Union, but populism and neo-Nazism, Greek President Prokopis Pavlopoulos has stated.

"All these forms of populism and neo-Nazism, concealed behind alleged patriotism, have one goal: to revive the nightmares of the past, the nightmares that destroyed Europe and almost the whole world. Therefore, we must struggle to ensure that these forces do not pass," Pavlopoulos said after the Arraiolos Group summit in Riga.

According to him, Europeans must decide what kind of Europe they want to see.

Pavlopoulos added that all the participants of the summit consider the upcoming elections to the European Parliament in May 2019 to be among the most critical since the creation of the eurozone, as the "nightmare of neo-Nazism" is reviving.

© AP Photo / Jens Meyer
Anti-Immigrant Protests in Germany: What Has Happened So Far (PHOTOS, VIDEOS)
A few days ago Greek Prime Minister Alexis Tsipras warned about the danger of neo-Nazism from the rostrum of the European Parliament.

Established in 2003, the Arraiolos Group unites leaders of the European Union member states with a parliamentary form of government. The first summit took place in the small Portuguese city of Arraiolos. The current meeting in Riga was held from Thursday to Friday. The next summit is scheduled in Athens in September 2019.

In Riga, where the summit took place, marches in memory of deceased members of the Latvian Legion of the Waffen SS are regularly conducted. They have become a cause for harsh criticism by a number of international anti-fascist organizations as well as of governments worldwide, including Moscow.