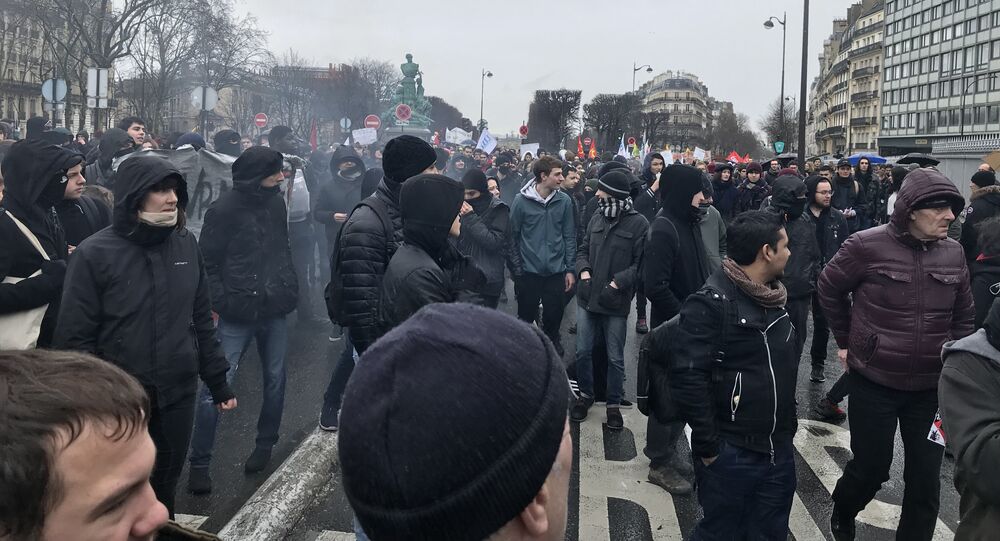 Fights, Cyberbullying, Rape: Why Are French Schools Getting More Violent?

According to the United Nations Children's Fund (UNICEF), a hefty 51 percent of French schoolchildren have at least once fallen victim to bullying in recent months and one in five faced physical abuse. Sputnik France discussed the situation with representatives of local federations of schoolchildren's parents.

On September 6, 2018, UNICEF released a report titled "The Daily Lesson: It is necessary to Put an End to School Violence," as part of the #ENDviolence campaign. The report names France among the “bad students.”

France fared no better in terms of its schoolchildren’s discipline, as is evident from data released by the Organization for Economic Cooperation and Development (OECD) in March 2017.

© AFP 2020 / Mandel Ngan
Gun Violence Panic Hits Florida School 12Km Away From Tuesday's Massacre Scene
Also, in 2017, the newspaper Le Parisien wrote about 442 serious daily serious incidents in French colleges, based on data provided by the Department of Evaluation, Prediction and Efficiency (DEPP). It is the only figure provided by the French Ministry of Education, which, according to the newspaper, states that "it is impossible to provide complete data on the number of attacks."

In an interview with Sputnik France, the head of the Federation of Parent Councils (FCPE), Raymond Artis, explained the increase in the number of alarm signals by the fact that people have become “more and more intolerant.

“Most experts argue that there is more violence in schools. It is necessary to document this phenomenon and keep fighting it,” he added.

Samuel Cywie of the Federation of Students’ Parents in State Educational Institutions, agreed.

"The society as a whole is becoming more and more unrestrained, and unfortunately there are more violent acts in schools compared to what we had before.”
He still believes that the term "physical violence" should be used with caution.

“I do not want to underestimate the facts, but there are restless children who are being bullied, and this has always been so. But now, really, we have to admit that the situation has deteriorated.”

On March 19, a teacher at the school Jules Ferry of Colomiers was beaten up by pupils of junior classes. In January, a teacher at Rosa Park College in Marseilles was beaten by a 5th grade student after she tried to take away his mobile phone.

“I'm not sure if this is the best solution, one way or another it will be difficult for us to apply this ban. I place more hope on precautionary measures and schoolchildren's support: whether it's sexual education, civic education or prevention of the danger emanating from the Internet," he argued.

Security guards at a school in the troubled area of the Saint-Denis commune in Paris said that they are making sure that no one brings weapons to school. In late 2016, the schoolmaster and his assistant were beaten up by a 15-year-old student whom they reprimanded for being late for classes.

Raymond Artis said that school violence was largely due to social inequality.

"These manifestations of violence are associated with the geographical, social, cultural marginalization of some students. We must understand that our education system is able to ensure the future of as many students as possible. We are creating a model of society that is focused on youth, but it still remains out of reach for many of them,” he said.

"It depends on the level of leadership and the number of supervisors in schools. We need more money,” he said.

Alarmed by the recent spike in violence in French schools, officials, experts and community leaders are looking for a solution to the problem.

The government, too, says it’s taking action, but critics say the authorities have been too slow in dealing with the growing problem.