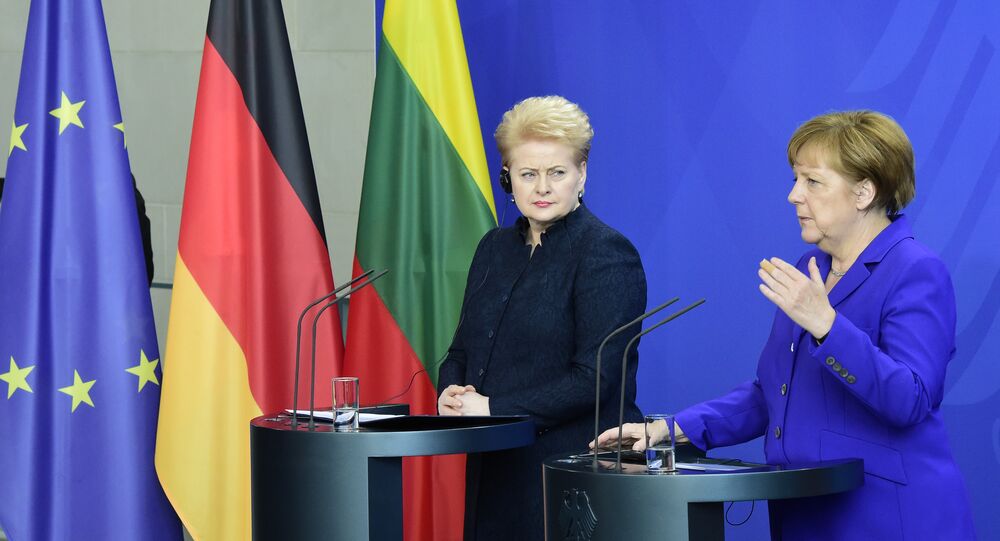 During the Friday visit, the German Chancellor, among other things, plans to travel to the central Lithuanian town of Rukla, where troops of the multinational German-led NATO battalion have been stationed since 2017. Also on the agenda is the future of the Nord Stream 2 project.

During Angel Merkel's visit to Lithuania on Friday, she may face local scrutiny. Lithuanians have become specifically "leery of Germany's Russia policy," according to Deutsche Welle (DW).

The news network reported that on the one hand, Merkel is seen as a "towering figure in European politics" who will be welcomed in Lithuania, where she is due to sit down with President Dalia Grybauskaite and the prime ministers of all three Baltic states, as well as visit the German troops stationed in the central Lithuanian town of Rukla.

On the other hand, DW adds, the general public in Lithuania is seriously concerned about Berlin's willingness to maintain a dialog with Moscow, adding to the popular perception that Germany is "not a very reliable NATO ally."

This standpoint is supported by a poll conducted the Pew Research Center, which revealed that only 40 percent of Germans believe that their country should use military force to defend a NATO ally if it got into a serious military conflict with Russia.

"This is one of the lowest figures among the 29 [NATO] alliance members," DW pointed out.

Another bone of contention between Germany and Lithuania is Berlin's "tacit support" for the Nord Stream 2 gas pipeline project, in which the Russian gas giant Gazprom has a partnership with German, Dutch and French companies.

In this context, DW cited Vygaudas Usackas, former Lithuanian foreign minister and EU ambassador to Russia, as saying that "the European Commission has already said the [Nord Stream 2] project contradicts the stated goal of diversifying the [European] Union's energy supply" and that "as a leading European power, Germany should lead by example, not by exception."

Earlier this year, Merkel underscored that Berlin considers Nord Stream 2 an economic project and that it believes that the project "does not pose a threat to the diversification of supplies."

© AP Photo / Mindaugas Kulbis
Another Incident Involving Drunk NATO Serviceman Occurs in Lithuania
Lithuanian Energy Minister Zygimantas Vaiciunas, for his part, said that "before making a decision on Nord Stream 2, it is necessary to reach an agreement with the main EU institutions on the extent to which the EU legislation will be applied to such projects."

In January, Germany's Stralsund Mining Authority issued permission for the construction of the Nord Stream 2 gas pipeline in Germany's territorial waters, taking into account all potential environmental impact of the construction.