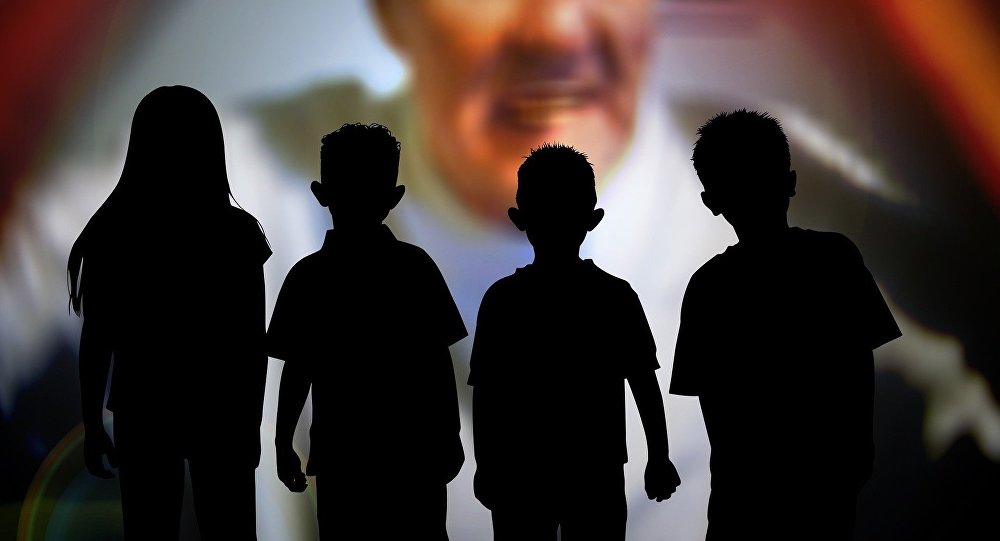 Earlier, Pope Francis extended his apologies following a grand jury report that more than 1,000 children had been sexually abused by "predator priests" in Pennsylvania over the course of decades.

At least 3,677 cases of child sexual abuse were perpetrated by clergy across Germany between 1946 and 2014, according to a study commissioned by the German Bishops Conference.

The victims were predominantly male and more than half of them were younger than 14, the study revealed, adding that every sixth child abuse case involved actual rape. In three-quarters of the cases, the victim and perpetrator knew each other through the church.

The study suggested that the alleged sexual abuse of minors by the German Catholic Church clergy, which first came to light in 2010, may continue nowadays.

The authors of the survey also stressed the importance of "coordinated action" and a "long-term list of measures" which they said could add to resolving the problem of sexual abuse by priests in Germany. At the same time, the authors kept mum on the causes of the problem, but singled out the priests' celibacy vow as a potential risk factor.

Bishop Stephan Ackermann said on behalf of the German Bishops Conference that "they know the extent of the sexual abuse that has been demonstrated by the study" and that they are "dismayed and ashamed by it."

The goal of study was to shed more light on "this dark side of our Church, for the sake of those affected, but also for us ourselves to see the errors and to do everything to prevent them from being repeated," Ackerman underlined.

Most Twitter users have, meanwhile, expressed indignation about the study's revelations, demanding that all those accused should be brought to court.

Disgusting! Time for the church and these pedophiles to be prosecuted! Especially the ones who covered it up!

Don't these so called "holy men" have an iota of shame?? Such shameless and abhorring men wish they burn in hell.

HOW are these pervs getting alone time with your children so they can abuse them? I don’t get it. Why are U NOT supervising your children when they interact with other adults? A priest is another adult. U accompany your children for their safety! Don’t use church as a (cont.)

This hurts to read. I am a survivor of childhood sexual assault. It has shaped the course of my entire life. It stole my innocence and made me feel unsafe always. PROSECUTE!!!!

I think that a reasonable response to the clergy who committed these crimes would be extermination. Crucify every one of the bastards and televise their suffering to let all of them know it is wrong and stop it happening again.

Everyone knows that this horrific abuse is going on for many, many years. It is time to make these monstrous people pay for what they have done to innocent children. Charge them all, and put them in jail. Enough already!

This is deplorable.
✔All priests must be screened for any pedophile tendencies before being accepted into priesthood
✔ The unnatural issue of life long Celibacy is repressive & causes secretive outlets of perversion. Priests & nuns celibacy needs to be abolished as a 'rule'

What's depressing is that those guilty of such crimes seemingly don't see themselves as wrong or have any remorse. Who are children to trust any more? Surely this is a great stain on the Catholic Church.

They all should be in jail! If not White & a priest these monsters would have been locked away from Society. The @USCCB must clean their own houses/suffer from thousands of lawsuits from sexual abused victims. This will surely bankrupt the church at some point in time. #ThankGod

This is why believers should put their faith in God; not the church; not the priests & bishops. How much more of this will faithful Catholics endure, before renouncing their ties to a corrupt, cesspool of a church, where sin and immorality are entrenched and endemic?

Late last month, Pope Francis has called to "acknowledge and condemn" multiple cases of sexual misconduct involving minors and the cover-up of abuse in the Catholic Church. The statement came in response to fresh reports of the large-scale sexual abuse of minors among the Catholic clergy in Pennsylvania, a month after the resignation of a prominent Vatican figure amid a sex scandal.

In a letter to all Catholics, the Pontiff admitted that sex abuse in the church "was long ignored, kept quiet or silenced." While claiming that most cases in America "belong to the past," he said that the church had failed to recognize the scale of the damage.

The letter came out after a Pennsylvania grand jury accused more than 300 priests of abusing children for decades, after an investigation, largely based on secret church archives, identified more than a thousand young victims.