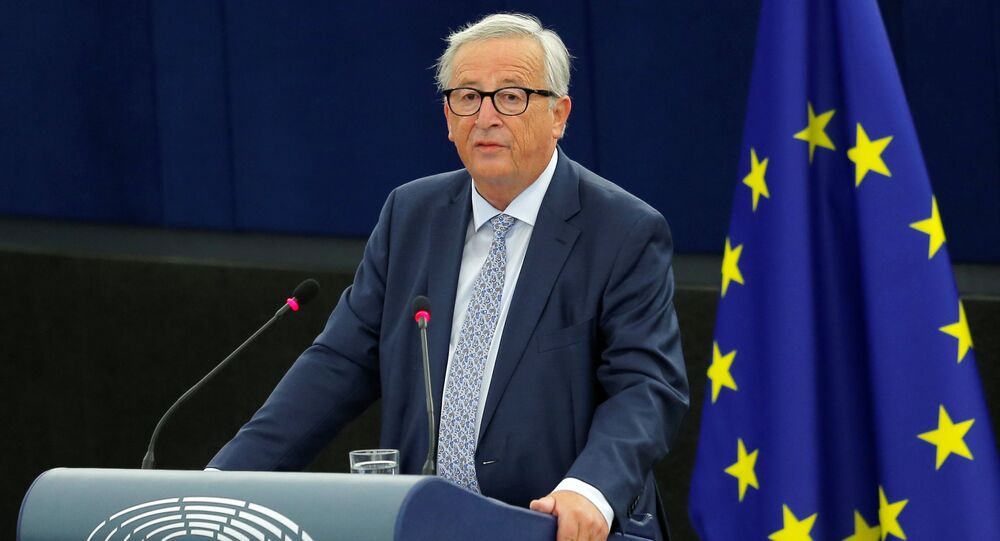 During his annual address to the EU Parliament, European Commission President Jean-Claude Juncker has underscored that "the EU must become more of a global player," adding that the block should be "more independent in defense."

In his State of the EU address to the bloc's Parliament, European Commission President Jean-Claude Juncker specifically stressed that "united Europe has become an unavoidable force in world trade."

Juncker stressed that Brussels respects the UK's decision to withdraw from the EU but added that "we regret Brexit deeply."

Juncker Vows to Add to UK's "Orderly" Exit From EU

"The EU asks the UK government to understand that leaving EU means losing privileges, not getting parts of the single market," Juncker pointed out.

He pledged that the EU will do its its best to avoid the re-establishment of a hard border in Ireland, saying that "it is Brexit that makes the border more visible, not the EU."

Juncker underscored that Britain will never be "an ordinary third country for the EU" and that the UK will always be a close partner of Brussels "in economic and security terms."

The EU will work day and night to ensure an orderly British withdrawal from the bloc, according to Juncker.

Separately, the European Commission President has called for strengthening the EU's external borders amid the bloc's efforts to contain migration.

"The European Commission is today proposing to strengthen the European Border and Coast Guard to better protect our external borders with an additional 10,000 European border guards by 2020," Juncker underlined.

Juncker Calls For 'Balanced Partnership' Between EU and African Countries

Additionally, the European Commission President urged the bloc to develop a "new alliance" and a "balanced partnership" with Africa, a call that comes amid EU countries' attempts to reach a consensus on resolving the flow of immigrants crossing the Mediterranean.

"We should move the many trade agreements between Africa and the European Union towards a continent-to-continent free trade agreement. Africa does not need charity, it needs a balanced partnership and Europe needs this partnership just as much," Juncker pointed out.

International Role of Euro Should Be Increased — Juncker

He also called on the EU to promote the international role of the euro, referring to recent events which he said showed "a need to deepen the EU's monetary union and capital markets union."

"It is strange that the EU pays energy bills in dollars when only two percent come from the United States," Juncker said, singling out the EU airlines' "ridiculous" use of dollar prices when purchasing aircraft.

In this vein, completing the economic and monetary union is a high-priority task if the bloc hopes to promote the euro as a world currency, he said.

Earlier, EU spokesman Margaritis Schinas said that Juncker knows that this is a "critical" moment for Europe, as President Donald Trump's United States is an "unpredictable foreign policy friend and a protectionist trade rival."

Juncker's speech comes amid calls to decrease the use of the US dollar in energy contracts, diminishing Washington's financial influence.