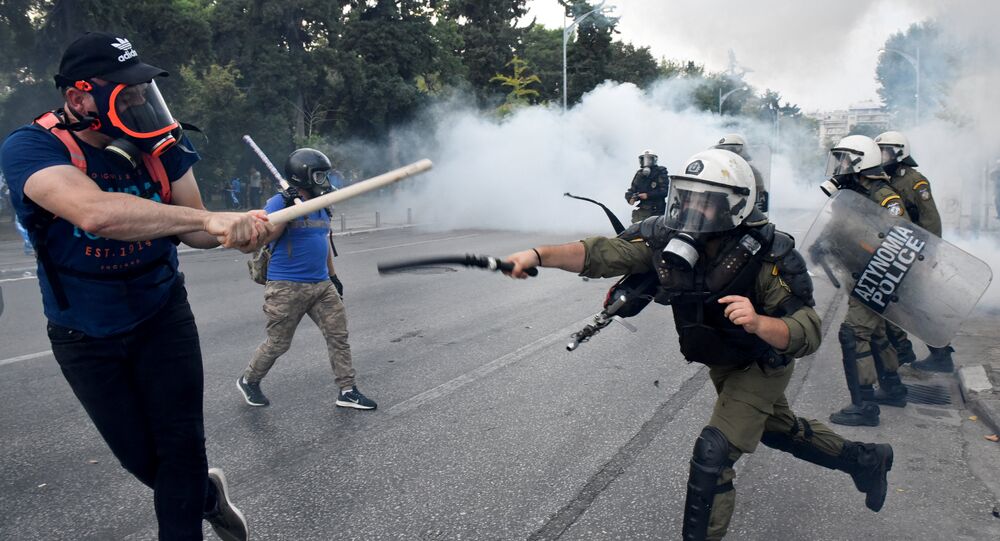 ATHENS (Sputnik) - Protests against the Macedonia name deal in the northern Greek port city of Thessaloniki have left 15 police officers injured, and also resulted in the detention of eight people, including two minors, the Kathimerini newspaper reported.

According to the newspaper Kathimerini, an estimated 6,000 demonstrators late on September 8 took part in a rally dubbed "Macedonia is Greece," to protest the renaming of the former Yugoslav republic. Around 100 people, wearing masks, started throwing stones and Molotov cocktails at the police officers, while the police responded by shooting tear gas and concussion grenades at the protesters.

A total of 28 people were initially seized by the police, but most of them were later released. The injured police officers received medical attention.

© REUTERS / Alexandros Avramidis
WATCH Greek Police Use Tear Gas Amid Macedonia Name Row Protests in Thessaloniki
This is not the first rally against the name deal, as a similar mass protest had gathered between 300,000 and 500,000 people in January, according to the coordinators.

On June 17, the Greek and Macedonian foreign ministers signed an agreement on the former Yugoslav republic to be renamed the Republic of North Macedonia, following a decades-long dispute over the use of "Macedonia," which Greece objects to because it is also the name of one of its regions.

On September 30, a referendum on the former Yugoslav republic's new constitutional name will be held, and if the move is approved, the country will be able to seek NATO and European Union membership.