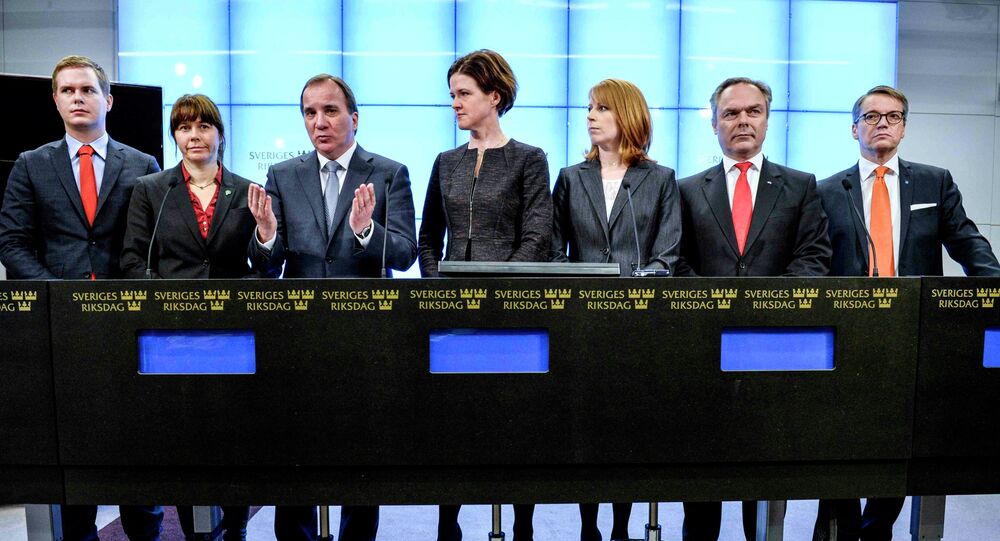 Sweden’s traditional mainstream parties are facing a strong challenge from the anti-immigration right-wing Sweden Democrats who have made migration a key issue in the election as the country counts the costs of the large number of migrants it has taken in in recent years.

With Swedish voters going to the polls today to elect the country’s new parliament and government, the nationalist Sweden Democrats (SD) are widely expected to come in second in the general election amid voter discontent over issues like immigration, crime and health care, the BBC wrote.

© REUTERS / TT News Agency/Fredrik Sandberg
Alternative for Sweden Party Blames Mass Car Arsons on Migrants, Suggests Deportation
While polls show that the Sweden Democrats can count on 20 percent voter support just eight years after they entered parliament, neither the governing Social Democrats nor the main center-right party is likely to win a majority.

The Sweden Democrats owe part of their success to people’s disillusionment with the country’s governing coalition’s policies.

With immigration being a central issue of the campaign, SD leader Jimmie Akesson said that his plan to take in fewer migrants would be regarded as "normal politics in the rest of Europe."

While Sweden's economy is booming, many voters are worried about the country’s housing, healthcare and welfare services, which have come under pressure from a wave of immigration since 2015 when Sweden took in a record 163,000 asylum seekers in a single year — the highest such intake in the EU per capita.

Fully aware of these concerns, the country’s traditional parties have since hardened their tone about integrating migrants into Swedish society.

Aside from immigration, climate change is an issue many Swedes care about – especially after a long, hot summer and severe forest fires that gutted around 25,000 hectares of land, forcing many farmers to destroy their livestock after their pasture land dried up.

Who Will Be in Charge?

Sunday’s election will be a test for Prime Minister Stefan Lofven with his Social Democrats who have dominated Swedish politics since the 1930s and effectively built up the country's welfare state.

The party is expected to record a low score in the vote. Lofven has been attacked by the right for his open-door migrant policy, and from the left for later slamming that door shut.

In recent years Prime Minister Lofven’s minority, center-left coalition government made up of his Social Democrats and the Green Party has seen a drop in popular support, just as the largest traditional opposition party, the center-right Moderates.

However, polls suggest that the Social Democrats are narrowly ahead of other parties and may lead another minority government.

Both the Social Democrats and the Moderates have said they will not enter a coalition with the SD, no matter how well it scores in Sunday’s vote.