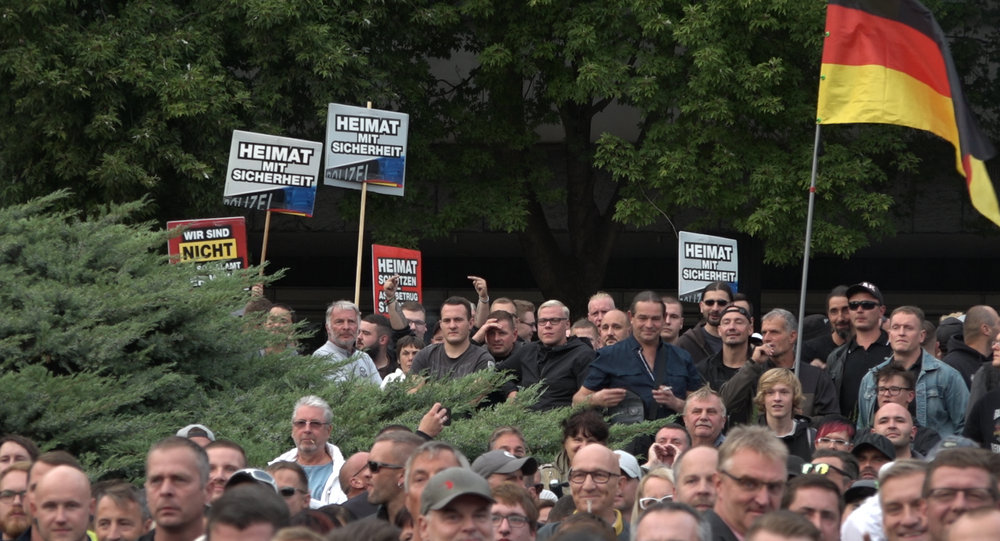 The German city was rocked by multi-day protests after a local carpenter was allegedly stabbed to death by two migrants from Syria and Iraq. According to German media, among the protesters there were not only local residents and right-wing activists, but also "extremists." The head of German intelligence has dispelled these reports, however.

A Jewish restaurant in the German city of Chemnitz called "Shalom" was attacked on August 28 by black-clad people shouting anti-Semitic slogans, reported Die Welt. The assault came two days after a local carpenter was reportedly killed by two migrants in a stabbing attack that ignited anti-migrant protests in the city that lasted for several days.

© AP Photo / Jens Meyer
Reports of 'Extremists' in Chemnitz Likely to be Misinformation - German Intel
According to the owner of the restaurant, interviewed by the German newspaper, the attackers threw rocks and bottles at the restaurant's windows and shouted "Get out of Germany, Jewish pigs." One of the attackers managed to injure the owner, Uwe Dziuballa, who was struck by a rock.

He revealed that the restaurant has been facing anti-Semitic attacks from the locals since it was established in 2000, but the latest was the most serious yet.

It had previously mostly been limited to drawing Nazi swastikas on the walls of the restaurant, crushing windows and even putting a pig's head on the doorstep. German authorities have already launched an investigation and will look into the case as an anti-Semitic incident.

Chemnitz was rocked by protests after a local was reportedly killed by migrants from Syria and Iraq following a dispute at the festival. German media reported that extremists attended the protests and were hunting non-Germans across the city, but Germany's intelligence chief, Hans-Georg Maassen, said it was unlikely to be true.