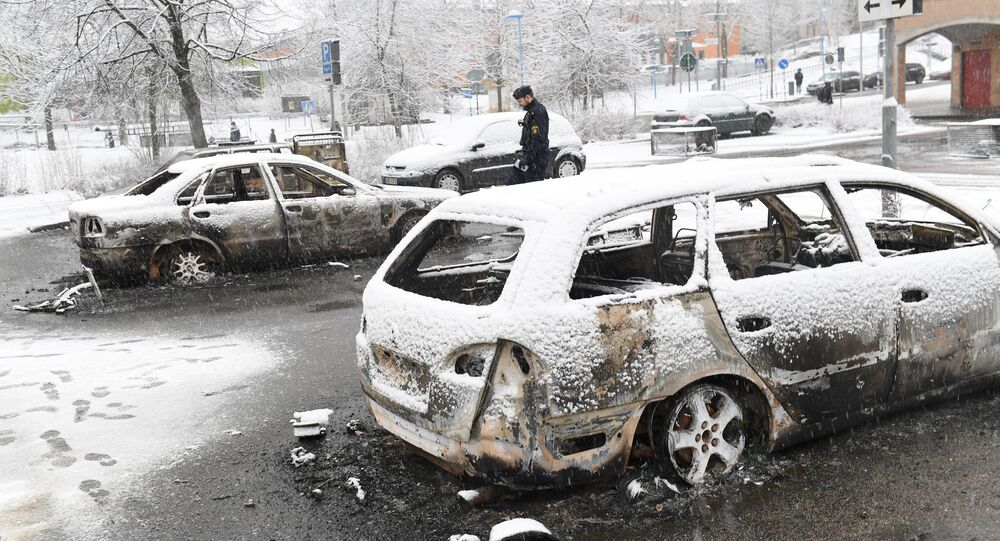 MOSCOW (Sputnik) - Migrants are responsible for the string of car arsons across Sweden, and deportations are needed to curb this activity, the candidate from Alternative for Sweden (AfS) in the upcoming parliamentary election, Markus Jonsson, told Sputnik in an interview.

"This was filmed by residents who saw their own cars be set ablaze in a very organized manner, when the immigrants ran between cars, smashed windows and set them ablaze. This is obviously people that cannot be in Sweden, who are not able, or willing or have the prerequisite to become a part of our society. The only solution is re-migrate these people to their countries," Jonsson said.

While Swedish Prime Minister Stefan Lofven has said he was angered by the arson, the AfS candidate argued that the government did not do enough.

"The signal that the Swedish authorities is sending to these kinds [of people] is that ‘it’s fine to do this, nothing’s going to happen to you.' You need tough measures to meet this sort of problem, otherwise it’s going to escalate," Jonsson said.

© CC0
'Completely Shameless': Sweden's Largest Party Caught Peddling Lies About Right-Wing Rivals in Arabic
The police have reportedly said the arsons were not a new phenomenon, especially shortly before the beginning of a new school year. Media reports about the police statements did not specify whether the detained men were identified as migrants.

In mid-August, over 100 cars were burned down in a mass attack in the Goteborg area on Sweden's west coast in a single night. The authorities said that the attack was coordinated and carried out by a group of young people. Two suspects were reportedly detained in Sweden, and another one in Turkey, to where he fled after the attack. Several buildings and vehicles were set on fire about a week later in southern Sweden.

Jonsson also noted that his party AfS was planning to hold a rally in Stockholm to conclude its election campaign, despite being banned from doing so by the city’s authorities.

"More than a month ago we booked a public square in Stockholm called Kungstradgarden (Royal Garden) that is owned by the local government. They have a stage and you can rent it for an event or a rally of different kinds. We have done that, and we planned a schedule for the whole Friday — we have different speakers, panel discussions and musicians. On Monday, our booking was canceled by the ruling Social Democrats in the Stockholm City Hall," Jonsson said.

According to the candidate, the event was canceled after someone accused one of the planned party speakers of hate speech.

"One of the things, that our speaker said was ‘Sweden belongs to the Swedes.’ This was used as a reason for canceling our campaign finale. What it means is that we can no longer use the stage, the electricity and the speaker system. We still have a permission from the police to use the venue, so we will still hold our campaign finale, but it will be slightly different than planned," Jonsson said.

The candidate stressed that the cancellation was the government’s attempt to derail the party’s campaign.

While AfS has made the appeal to overrule the decision, the revision was unlikely, Jonsson said.

AfS’ right-wing rivals, Sweden Democrats, were polling third with 17.3 percent. AfS was not mentioned in the poll possibly falling under the "others" category, which gained 3.5 percent.