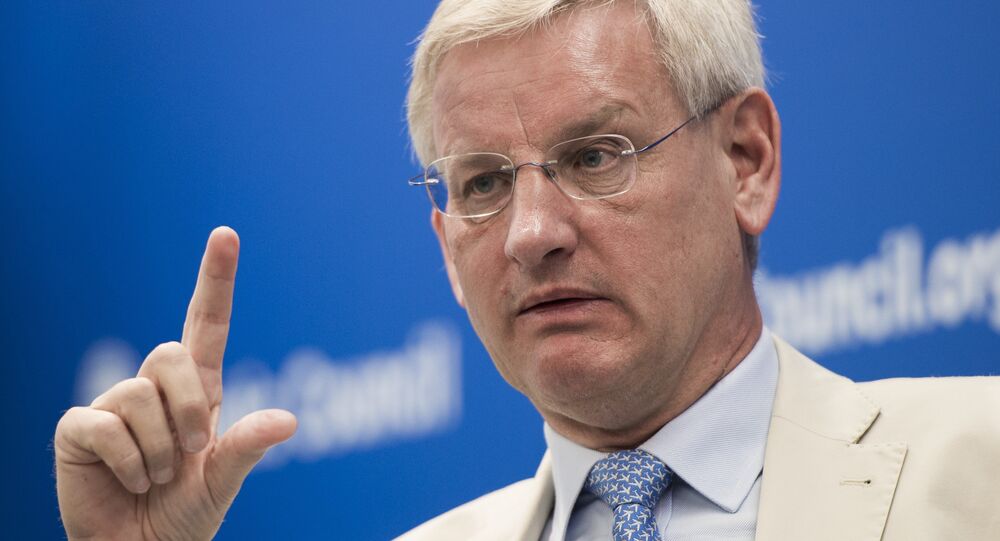 Facing a barrage of criticism, Carl Bildt rejected Swedish news reports as "disinformation," while claiming to have acted at the behest of his now-deceased superior.

Former Prime Minister and Conservative heavyweight Carl Bildt has been found to have leaked information about alleged incursions by the Soviet Union to the US Embassy before it was even presented to the Swedish people, Swedish national broadcaster SVT revealed, citing previously classified US documents.

As a member of the so called "submarine commission" who investigated suspected violations by the Warsaw Pact countries during the Cold War, Bildt gave the US advance information about the commission's findings in 1983.

During the early 1980s, the Cold War between East and West had deteriorated and the tension increased between the two superpowers: the Soviet Union and the United States. Sweden would remain formally neutral, although it forged extensive collaboration with the US at the start of the Cold War.

While the commission's report prompted Sweden's Olof Palme-led Social Democrat government into sending a sharp protest note to the Soviet leadership, Carl Bildt stirred a domestic debate by visiting the US and meeting CIA representatives shortly after the report was presented. Bildt's trip resulted in sharp criticism from Palme for "undermining Sweden's foreign policy." According to the recently emerged documents, Bildt had in fact informed the US even before the report was presented.

"Moderate (Conservative) MP and sub commission member Carl Bildt (please protect fully) has given us a preview of the commission report which will be published tomorrow," the US embassy wrote on April 25, 1983.

​This revelations prompted accusations of high treason from politicians and ordinary Swedes' alike, with the word "traitor" flinging around. According to former Social Democrat Prime Minister Ingvar Calrsson who called the incident "very serious," Bildt betrayed both the government and the country, undermining its credibility.

"The question is whether Bildt could make his career as a leader for the Conservatives with such a baggage. Could you elect a person who gambles with a superpower under the cover when Sweden is a neutral country to become a party leader and possibly even prime minister?" Carlsson wondered.

Bildt himself said he never provided the US with a full preview, but only with an oral description, stressing that he did it on behalf of the late commission's chairman and former Social Democrat Defense Minister Sven Andersson. Furthermore, Bildt claimed that Andersson conveyed the information to several parties, including the Soviet Embassy. This was vehemently denied by former Prime Minister Ingvar Carlsson, who stressed it was "unthinkable."

In 2001, another submarine commission found evidence of "fewer than ten submarine incursions" in the years 1980 to 2000. However, it also stressed that submarines from NATO countries also had a motive for entering the Swedish waters.

After the 80s submarine controversy, Bildt went on to lead the Conservative Party from 1986 to 1999, becoming Swedish PM from 1991 to 1994 and Foreign Minister from 2006 to 2014. At home, he is credited with intensifying Sweden's European integration and bringing Sweden into the EU. Internationally, he is remembered for his efforts as mediator during the Balkan wars as well as being one of the architects of the EU's policy in the East, particularly Ukraine. In 2015, Bildt was appointed to Ukraine's International Advisory Council on Reforms under President Petro Poroshenko.