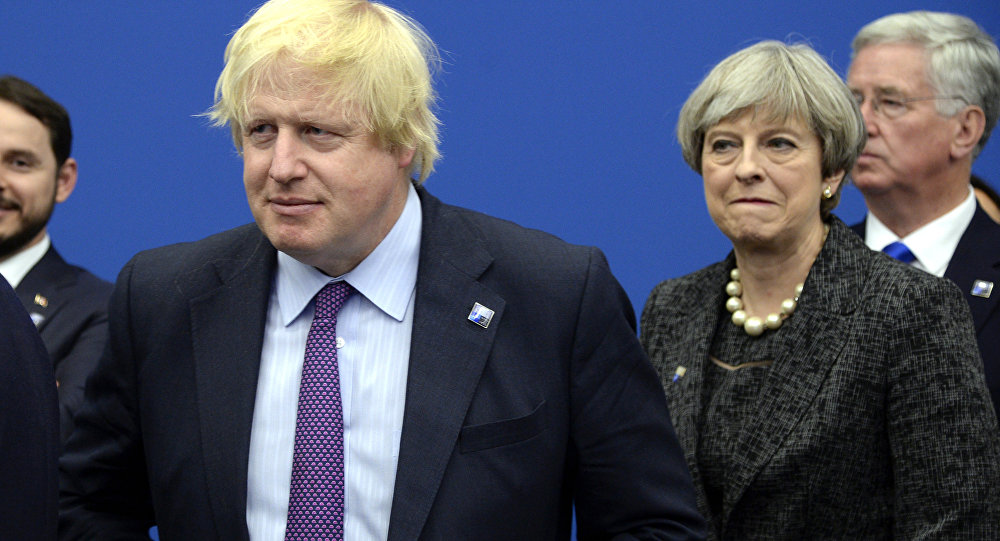 Earlier, in an article published in The Telegraph, Boris Johnson slammed UK Prime Minister Theresa May's Brexit negotiating strategy, accusing her of leading Britain “into battle with the white flag fluttering over our leading tank” and not trying hard enough to secure a favorable withdrawal deal.

Prime Minister Theresa May has hit back at her former cabinet minister, claiming that Johnson has “no new ideas” regarding Brexit, while stressing the UK’s need for “serious leadership” and a “serious plan”, seemingly suggesting Johnson is not up to the job.

The remarks were made by the prime minister’s spokesperson on her behalf, just hours after Johnson’s article was published.

“Boris Johnson resigned over Chequers, there’s no new ideas in this article to respond to. What we need at this time is serious leadership, with a serious plan. That’s exactly what the country has with this prime minister and this Brexit plan,” a Downing Street spokesperson said.

Meanwhile, recently appointed Home Secretary Sajid Javid made use of a speech on Monday to urge Boris Johnson to "support the prime minister with her plan.”

© AP Photo / Martin Meissner
UK Conservative Party's Pro-Brexit Members Losing Confidence in May – Poll
With polls showing a significant drop in support for the prime minister in recent months and the PM struggling to manage growing discontent from Tory backbenchers, Johnson has been tipped as a potential replacement, and is reportedly seeking to launch a leadership challenge.

Last week, PM May insisted she would fight a leadership bid against her, but it’s unclear if she has sufficient support from Tory MPs or even her own cabinet.

Earlier this year, Boris Johnson stood down as foreign minister in protest of May’s Chequers Brexit plan, though he continues to serve as an MP for the Uxbridge and South Ruislip constituency.

Then-Brexit Secretary David Davis also resigned as he refused to throw his weight behind the prime minister’s Brexit strategy.

Both ministers were swiftly replaced, with Jeremy Hunt taking over as foreign minister, while Dominic Raab now heading up negotiations with Brussels as Brexit secretary.