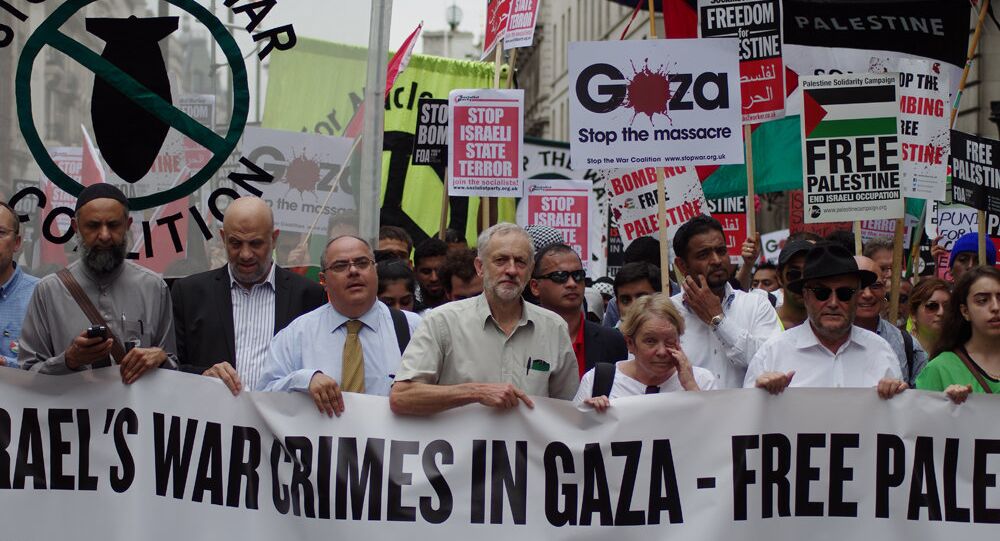 The declaration of support comes as more reports emerge in the British press that claim the Labour Party leader has associated himself with known terrorists, including at a 2012 conference in Qatar, attended by a senior officer from the Islamist Hamas’ military wing.

An alliance of four largely Arab parties in the Israeli parliament has declared their support for beleaguered UK Labour leader Jeremy Corbyn, amidst ongoing accusations of anti-Semitism against him and senior members of his party.

In an open letter to the UK's Guardian newspaper, the members of Israel's parliament, or Knesset, championed Mr Corbyn for what they called his "long-standing solidarity with all oppressed peoples around the world, including his unflinching support for the Palestinian people."

"We stand in solidarity with Jeremy Corbyn and we recognise him as a principled leftist leader who aspires for peace and justice and is opposed to all forms of racism, whether directed at Jews, Palestinians, or any other group," they wrote.

The MPs also said that Palestinian citizens of Israel — which number at about 1.8 million — "have yet to experience a single day of equality," and say that millions of them are under "military occupation in the West Bank, and under siege in the Gaza Strip," simply because of their identity as minorities.

The letter was signed by MPs Ahmad Tibi, Masud Ganaim, Yousef Jabareen and Jamal Zahalka and represents 13 other MPs who together make up the ‘Joint List Coalition' — the Knesset's third largest political faction.

The letter comes in stark contrast to past exchanges between Mr Corbyn and Israeli Prime Minister Benjamin Netanyahu.

The two men have previously sniped at one another, with Mr Netanyahu proclaiming in August that Corbyn deserved "unequivocal condemnation" for attending a 2014 memorial service held for a terrorist involved in the 1972 Munich Olympic massacre, which culminated in the murder of 11 Israeli athletes.

Mr Corbyn quickly bit back, by charging that, "what deserves unequivocal condemnation is the killing of over 160 Palestinian protestors in Gaza by Israeli forces since March, including dozens of children."

For a number of months now, the UK Labour Party has been on the receiving end of a barrage of allegations of anti-semitism. These were exacerbated by its reluctance to adopt all of the examples of what constitutes anti-semitism laid out in the International Holocaust Remembrance Alliance's definition of anti-semitism.

Mr Corbyn has, on more than one occasion, bemoaned that some of the examples can, and have, been used to "restrict criticism of Israel that is not anti-Semitic."

Labour's ruling council will decide on Tuesday, September 4, whether to adopt all of the examples put forward, according to the Guardian.

READ MORE: Anti-Semitism' Accusers of UK Labour Party 'Out to Get Corbyn' — JVL