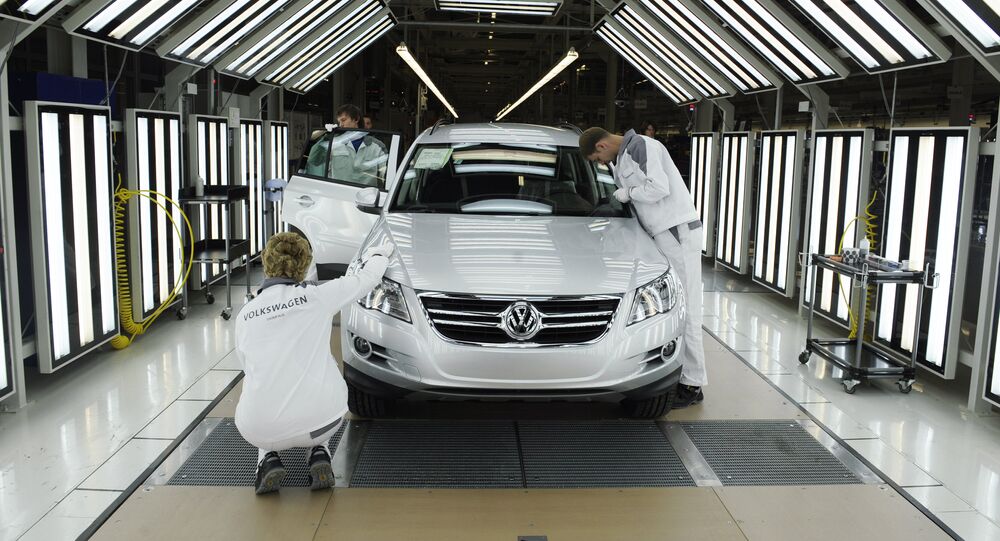 MOSCOW (Sputnik) - German carmaker Volkswagen might have manipulated data on exhausts not only of diesel, but also of gasoline engines of Volkswagen, Audi and Porsche cars, local media reported Sunday.

The Bild am Sonntag newspaper reported, citing the materials of the Munich prosecutor's office for the relevant investigation, that in November 2015, Volkswagen experts admitted that automatic transmissions in Volkswagen, Audi and Porsche had control programs that could change the exhaust data, confirming that the manufacturer could manipulate data on carbon oxide emissions and fuel consumption.

© REUTERS / Mal Langsdon
Volkswagen to Pay Germany $1.2Bln in Dieselgate Emissions Scandal
According to the publication, the company's internal presentation dated February 2016 contains data on how to activate the automatic box management program during the inspection in order to reduce emissions indicated.

Volkswagen spokesman told the publication that the company did not comment on the merits of the current investigation, but had intensively discussed the issue with the Federal Motor Transport Authority (KBA) in the recent months.

According to the materials of the prosecutor's office, KBA spokesman said that the watchdog was studying this controversial option of gasoline engines.

© REUTERS / Michaela Rehle/Files
Merkel Says Berlin Tries to Restore German Cars' Reputation After 'Dieselgate'
The so-called diesel scandal, involving a number of German car manufacturers, dates back to 2015, when the US Environmental Protection Agency (EPA) accused the Volkswagen Group, which owns 19 car brands, including Audi and Mercedes-Benz, of using specific software to falsify emission test results for its diesel-engine vehicles.

Since that, Germany has launched a number of investigations into its carmakers’ emission software systems.

READ MORE: Volkswagen to Recall Thousands of Vehicles Over Dieselgate

Volkswagen to Recall Thousands of Vehicles Over Dieselgate Scandal - Reports