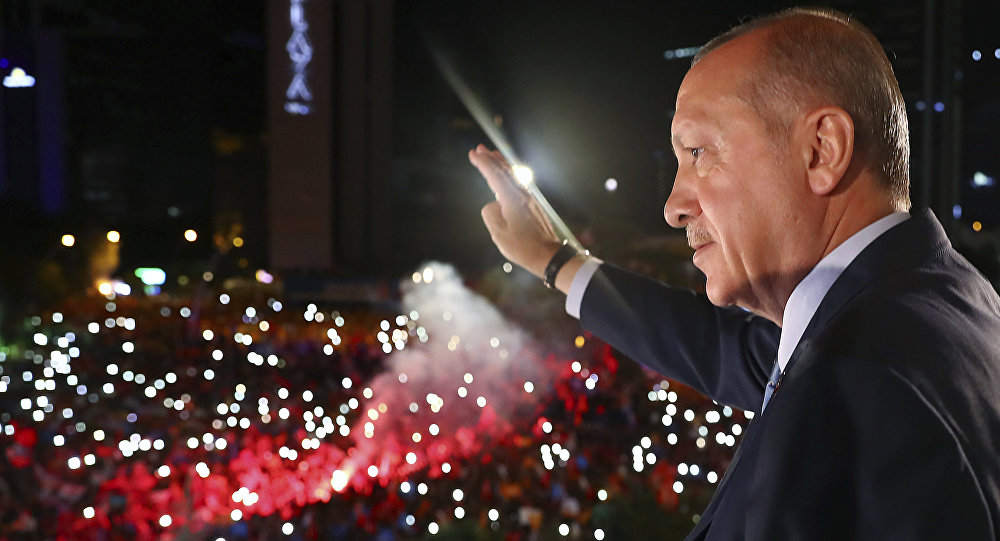 A fierce tariff spat with the US and a diplomatic row over the fate of American pastor Andrew Brunson, detained in Turkey in 2016, have dealt a heavy blow to the Turkish national currency, sending consumer prices up and the lira tumbling down.

President Recep Tayyip Erdogan took a fresh swipe at Western rating agencies on Friday over their negative outlook for the Turkish economy and accused them of attempts to undermine the country’s banking sector amid attacks on the national currency.

"If they have their dollars, we have our God. They can't topple Turkey with dollars," he told supporters in the northwestern province of Balikesir on Friday.
"Never mind those impostors, those racketeers. They have said a lot of things about us," he added.

Erdogan’s scathing comments came after the rating agencies Moody's and Fitch, sounded alarm about the state of the Turkish banks, citing the impact of the currency sell-off.

© REUTERS / Murad Sezer/Illustration
Turkey Must Lift Interest Rates to Resolve Lira Crisis - Fmr. US Diplomat
With the lira having lost 42 percent of its value against the US dollar since January, the country’s lenders are getting increasingly worried about the quality of their assets and their ability to survive the current crisis.

The lira’s depreciation has increased the cost of servicing the country’s external debt, around $179 billion of which matures over the course of the year to July 2019.

In an effort to prop up the national currency and make it less attractive for investors to hold foreign-currency deposits, the government said on Friday that it would lower the level of withholding tax on lira bank deposits, while raising it on foreign currency ones.

President Erdogan has repeatedly called on Turks to sell their dollars and euros to buy lira.

In an almost parallel development, Turkey's energy regulator announced a 14 percent hike on electricity prices for industrial enterprises and nine percent for residential use from September 1 in what experts believe will add to the country’s current double-digit inflation.

A rift with Washington over the arrest of American pastor Andrew Brunson has added to the lira’s woes.

President Erdogan, who calls himself an “enemy of interest rates,” hopes that lower borrowing costs will encourage credit flows, above all to the construction sector.

This does not sit well with investors, who are holding out for substantial interest rate hikes.

READ MORE: Turkey's Solution to Lira Crisis Will Be to Dedollarize Its Economy — Economist

In August, Moody’s announced it had lowered its rating on Turkey to Ba3 from Ba2, a step further into speculative territory. The move came a month after fellow rating agency Fitch also lowered its rating on Turkey, warning that Ankara’s “incomplete policy response” to its deepening economic trouble was unlikely to stabilize its currency and economy for a meaningful amount of time.