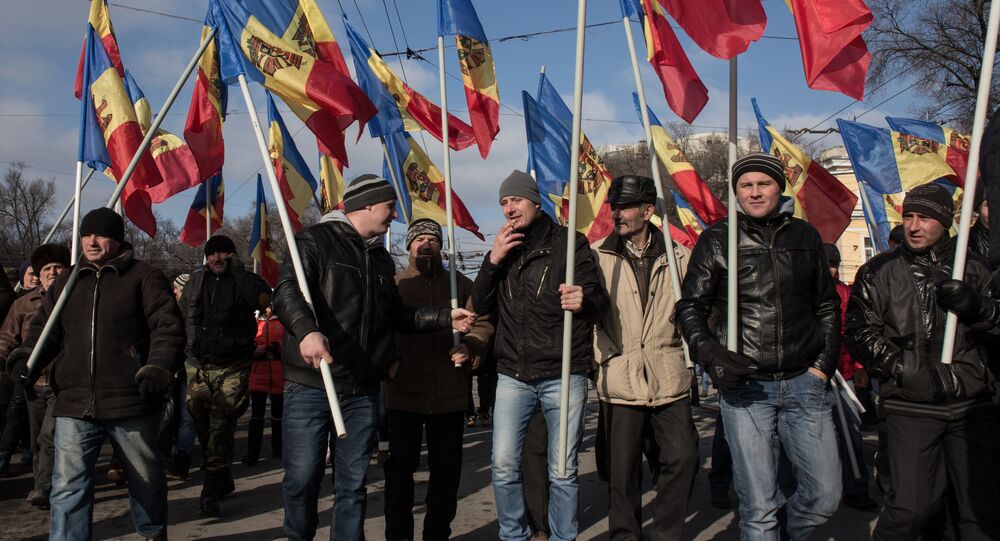 CHISINAU (Sputnik) – Supporters of Moldova’s reunification with Romania on Saturday organized a demonstration at the central square of Chisinau, a Sputnik correspondent reported.

Over 1,000 people gathered at the central square waving flags of Moldova and Romania. The crowd then marched to the outskirts of the capital when police stopped three buses with protesters from entering the city.

Sometime later the activists declared that the demonstration turned into an open-ended protest.

"Our manifestation turns into a protest, we are ready to stay here at night, tomorrow and the day after tomorrow until the authorities allow buses with our supporters to enter Chisinau," the organizers told the crowd.

When police tried to clear the road, clashes between officers and activists erupted. Traffic was restored with no reports about any injuries.

© Sputnik / Sergey Guneev
NATO Office in Moldova Likely to Close After Parliamentary Election - President
The previous rally in support of Moldova's unification with Romania was held in Chisinau on March 25, and ended with protesters adopting a declaration in favor of reunification. Moldova’s General Police Inspectorate (GPI) Deputy Director Gheorghe Cavcaliuc told Sputnik that approximately 7,000 people took part in the rally.

The Kingdom of Romania was established in 1881 when the principalities of Moldavia and Wallachia decided to unite in a single state. The present-day Republic of Moldova is composed of the Bessarabia region, which belonged to the Russian Empire at that time, as well as the Transnistria region where many Russians and Ukrainians are residing alongside Moldovans.