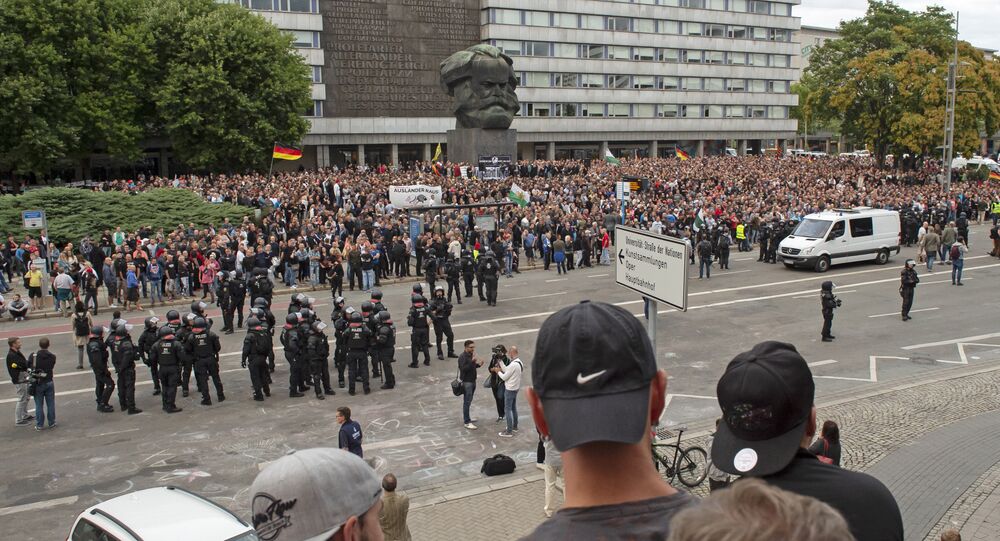 Participants of a march that started at 5:00 p.m. (2:00 p.m. GMT) are dressed in black, but holding white roses in memory of local resident Daniel Hillig killed a week ago, allegedly by migrants.

About 800 people gathered on Saturday an anti-immigrant demonstration in Saxony Chemnitz, Bild reported. The participants chant "We are the people", holding posters against the German migration policy.

The Alternative for Germany (AFD) along with anti-Islamization movement PEGIDA has organized the "March of Silence" in the city of Chemnitz, which has of late become the center of mass demonstrations by local residents and right-wing activists against the country's migration policy.

The authorities and law enforcement are calling for the protesters to leave the streets.

Later on the same day, hundreds of angry local residents gathered at an uncoordinated demonstration in the center of Chemnitz and interrupted a city holiday.

About 600 peaceful protesters were planning to hold a rally in the city center to commemorate the victim of the stabbing attack, but the Chemnitz authorities banned the demonstration and the activists have found themselves blocked by the police on their way to the central square.

The protests were prompted by the killing of Daniel Hillig, a German national by allegedly two migrants on August 26. The incident has sparked spontaneous protests in the Saxon city of Chemnitz, which have turned violent amid clashes between different groups of protesters and police.

Anti-Immigrant Protests in Germany: What Has Happened So Far (PHOTOS, VIDEOS)