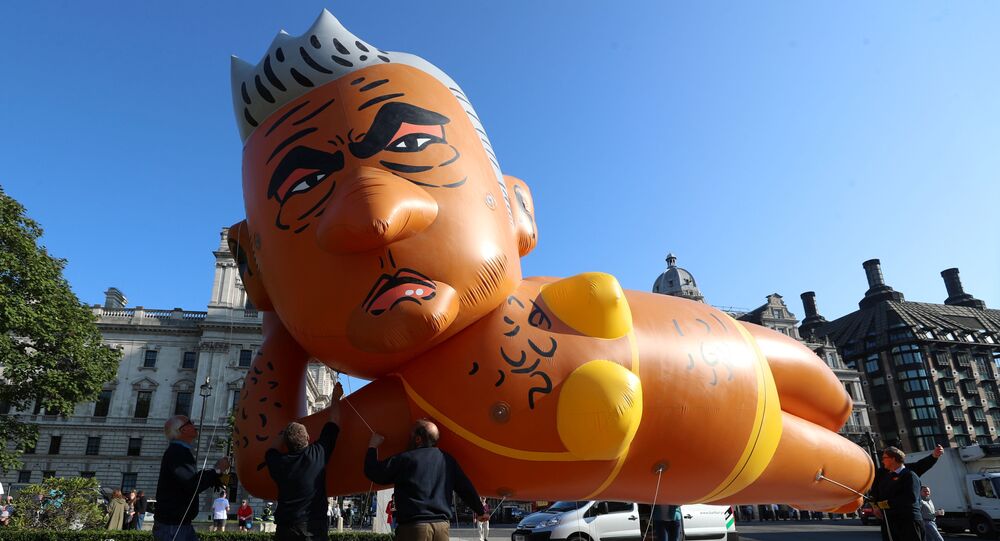 British activist Yanny Bruere's crowdfunding campaign has raised roughly £59,500 for a gigantic balloon of London Mayor Sadiq Khan sporting a bikini to be launched in the sky.

British protesters campaigning against what they described as skyrocketing crime in the city have flown the nine-meter blimp of London Mayor Sadiq Khan wearing a yellow bikini to show their indignation at his policies.

"Under Sadiq Khan we have seen crime skyrocket to unprecedented levels. People in London don't feel safe and they aren't safe, 81 murders this year alone! Khan out," the crowdfunding page, launched by activist Yanny Bruere, read.

The campaign kicked off after Khan gave the green light to the giant blimp of the US president to fly over the British capital during the latter's first state visit to the United Kingdom in July.

“In light of the Donald Trump ‘Baby Trump’ balloon being allowed to fly over London during his visit to the UK, let’s get a ‘baby Khan’ one and see if free speech applies to all and whether or not Mr. Khan and the London assembly will also approve this,” Bruere wrote on the page.

The campaign to launch the blimp of the mayor has been given the go-ahead by City Hall, Khan, the police and air-traffic controllers.

"As always, City Hall has been working in very close coordination with the Metropolitan Police and other key agencies to ensure this protest is able to be carried out in a safe and secure way," a spokesman for the mayor was cited as saying by local media.

Many suggested that the balloon, with its bikini is an allusion to Khan's decision to forbid body-shaming ads in 2016.

"If people want to spend their Saturday looking at me in a yellow bikini they're welcome to do so. I don't really think yellow's my color though," Khan said, according to the BBC.

Even though Bruere has reached his goal of flying the blimp over London, the campaign is still accepting additional donations to "keep demonstrating our unhappiness with Sadiq Khan."