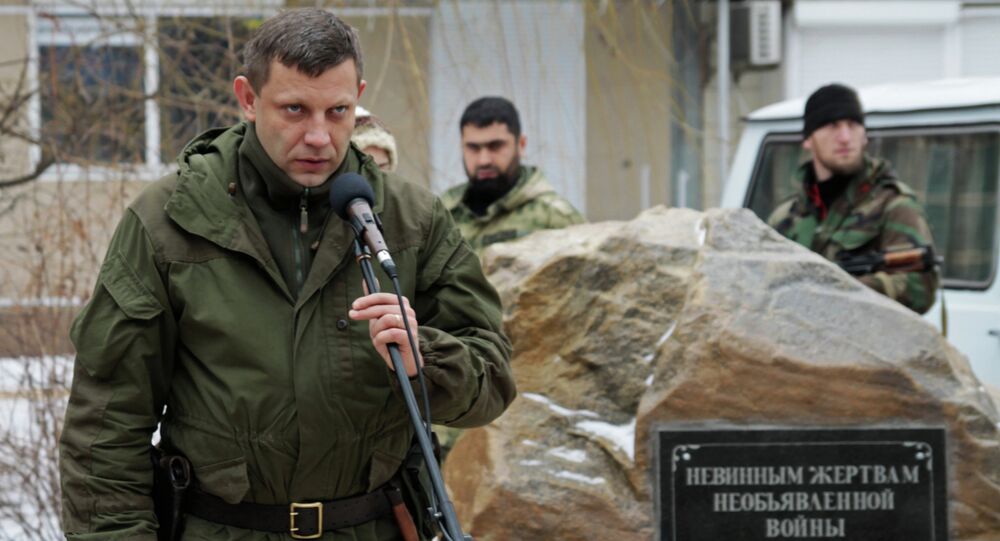 Officials of the Donetsk People's Republic (DPR) have confirmed that the republic’s leader, Alexander Zakharchenko, was killed in a blast that occurred at a local restaurant. Sputnik has gathered all the information about the incident available so far.

Assassination in the Restaurant

DPR head Alexander Zakharchenko was killed on August 31 in a bomb explosion at the restaurant Separ in central Donetsk. According to an adviser to the DPR president, the bomb had deliberately been planted in the restaurant, which was frequented by the slain leader.

As a result of the explosion, Zakharchenko sustained a fatal head trauma. DPR Finance Minister Alexander Timofeev, who was at the site when the bomb went off, was also injured.

Alexander Kazakov, an adviser to the DPR president, announced that the suspects behind the assassination have already been detained, however their identities were not revealed in the statement. The adviser also added that a state of emergency has been introduced in the DPR and its borders have been closed.

Deputy Defense Minister and defense spokesman of Donetsk People's Republic Eduard Basurin accused Ukrainian Security Services of organizing the assassination and added that the US "directly partook in it." He also addressed Ukrainian President Petro Poroshenko, saying that his plans to destabilize the DPR won't work, as they "have everything under control."

Alexander Kazakov said in an interview with Sputnik that the DPR considers the assassination "a terrorist act," as the explosive device was planted deliberately in the restaurant.

Russia's Investigative Committee has opened a probe into the case as an international terror attack in accordance with Russian laws and "based on existing international experience." The committee stated that it is ready to assist the republic in investigating Zakharchenko's assassination.

Reactions to the Assassination

Russian President Vladimir Putin has blasted the assassination of the DPR's leader, saying it was an attempt to destabilize the region and force DPR's citizens to their knees. He stated that those responsible for the attack must be found and punished. Putin added that Russia will always support the people of Donbas.

The Russian Foreign Ministry released a statement that condemned the assassination and expressed condolences to the relatives of the wounded and deceased. The ministry said that the attack was aimed at destabilizing the process for a peaceful resolution of the Donbas conflict and is in line with Kiev's policy of resolving it by force.

The statement further noted that the "terrorist attack looks especially cynical," as it was carried out during the so called "school-time ceasefire." The Foreign Ministry also urged Ukraine to abandon "terrorist methods" of resolving its "internal problems" and expressed hope that Ukrainian politicians will manage to stop the "war party."

A spokeswoman for the Security Service of Ukraine (SBU) acknowledged that Ukraine is aware of Zakharchenko's death, but denied accusations against country's security services of organizing the assassination.