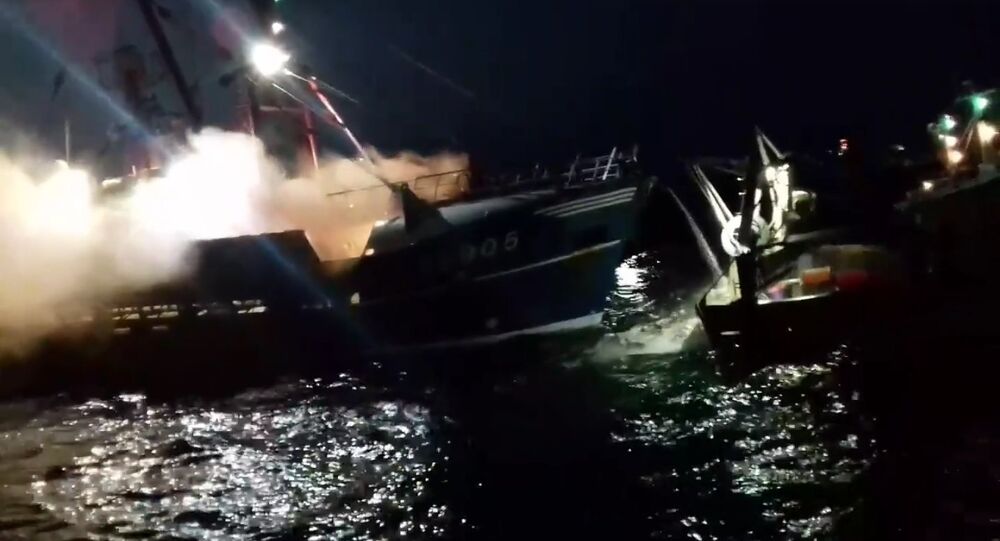 What started as an eyebrow-raising incident has turned into a large political scandal.

A recent clash between British and French fishermen in the English Channel over scallop crops has escalated into a full-blown political scandal, with even EU authorities forced to have a say in the matter.

A European Commission spokesman reacted to the shocking incident, saying "We invite the national authorities to resolve any dispute in an amicable way as has been done in the past."

© AP Photo / Eranga Jayawardena
‘Sounds a Bit Fishy!’ WATCH British and Norman Fishermen Clash at Sea Over Scallops
The incident, in which French fishermen threw stones and even attempted to ram British vessels, has sparked fierce political outrage within the UK. Environment Secretary Michael Gove has called on French authorities to watch over the country's fishermen while British vessels carry out their business in French waters, as per international agreements.

"They were fishing entirely legally, they had every right to be in those waters and we talked to the French authorities in order to ensure that we have a protocol," Gove said in a statement reported by the Express. "These are French waters — it's the responsibility of the French to ensure that those who have a legal right to fish can continue to fish uninterrupted."

Gove's sentiment has been echoed by Sheryll Murray, a Conservative MP who reportedly lost her husband, also a fisherman, in a maritime incident in 2011.

"I asked [Gove] if we had any fishery protection vessels that could go in and defend our fisherman and he said 'appropriate measures are in place'," she added.

it's not British or French fishermen to blame for the scallop war — it's the EU's barmy rules https://t.co/pnQsmXPvw1 pic.twitter.com/BjnR7tfgkA

​Barrie Deas, chief-executive of Britain's National Federation of Fishermen's Organizations, said: "We have raised the matter with the British Government and asked for protection for our vessels which are fishing legitimately."

© AFP 2020 / Thomas SAMSON
Protesters in France Damage Open-Air Urinals, Say They Violate Gender Equality
Some of the fishermen have suggested the UK should bring in the Royal Navy to protect fishing boats against attacks by the French. Bizzare as this may sound, it is likely that this is exactly what Prime Minister May will have to do. This, however, would require allocation of additional funds, Express reports.

​And of course, in a nation torn apart by the Brexit debate, the maritime incident has sparked even more criticism on how Theresa May's Chequers plan is not going to work after the UK leaves the EU. Owen Paterson, a former Environment Secretary, said that the UK needs full independence from the EU in order to prevent incidents like this.

Some 40 French boats surrounded five British vessels on August 29, and attacked the British fishermen who were plundering scallop crops in French territorial waters (to which the Brits have official access, as per international agreements). The reason for the attack was that, according to French law, French fishermen are not allowed to conduct business before October, while British vessels do not abide by such restrictions. The incident has been dubbed the "Scallop wars" in the media.