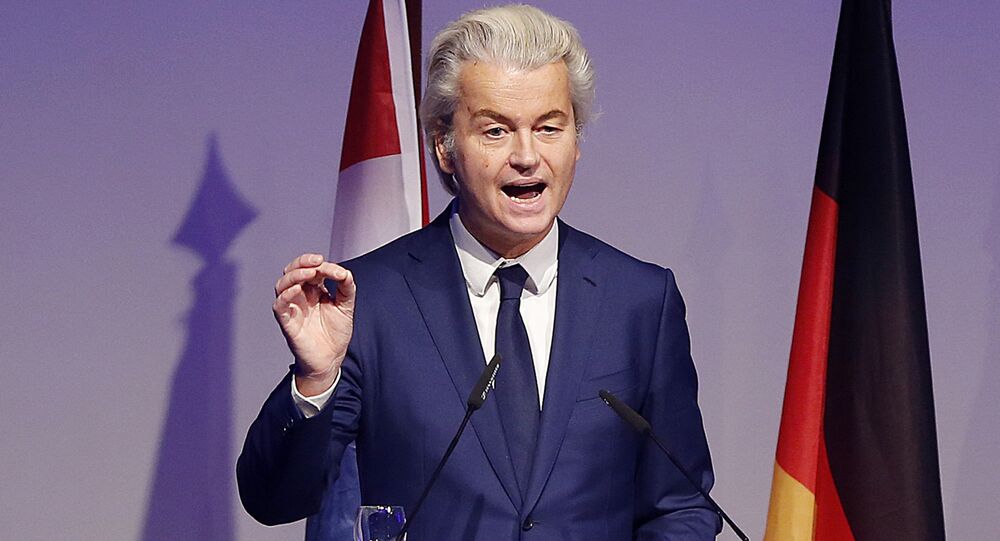 The head of the Netherlands' opposition right-wing Party for Freedom, or PVV, Geert Wilders, is known throughout Europe for his promising to ban the Koran and close down mosques.

The Netherlands' counter-terrorism police (NCTb) have arrested a man suspected of threatening an attack on anti-Islam right-wing lawmaker Geert Wilders, the organizer of a Prophet Muhammad cartoon competition due to be held in November, according to the AP.

Police said in a statement that they detained the 26-year-old, who has yet to be identified, at the main railway station in The Hague after they spotted his video on Facebook in which the man talked about staging an attack on Wilders as well as the Dutch parliament.

"I was told by NCTb this morning that a man on Facebook had said that he had arrived in the Netherlands for the purpose of killing me. Fortunately, he has been arrested. It is madness that this is happening because of a drawing contest and that it is raining death threats," Wilders wrote on his Twitter account.

The detention came while Wilders wad under round-the-clock security due to permanent death threats.

In June, media reports said that Wilders plans to organize a Prophet Muhammad cartoon competition at the tightly-guarded office of the Party for Freedom (PVV) in the Parliament complex.

The PVV said at the time that the contest had been approved by the Netherlands' counter-terrorism agency, with Dutch Prime Minister Mark Rutte describing the competition as "disrespectful" and "provocative." The country's Foreign Minister Stef Blok, for his part, pointed out that the competition hadn't been initiated by the  government.

© AP Photo / Yves Logghe
Dutch MP Geert Wilders Launches Election Campaign by Calling Immigrants 'Scum'
Commenting on the criticism, Wilders said that "freedom of speech is threatened, especially for Islam critics" and that "we should never accept that" because "freedom of speech is our most important freedom."

Muslims consider images of the Prophet Muhammad to be blasphemous, and even his positive depictions are banned in Islam.

In 2016, Wilders was accused of inciting hatred and discrimination after asking supporters whether they wanted "fewer or more Moroccans" in the Netherlands. The crowd shouted "fewer!" and Wilders said, "then we'll fix it."