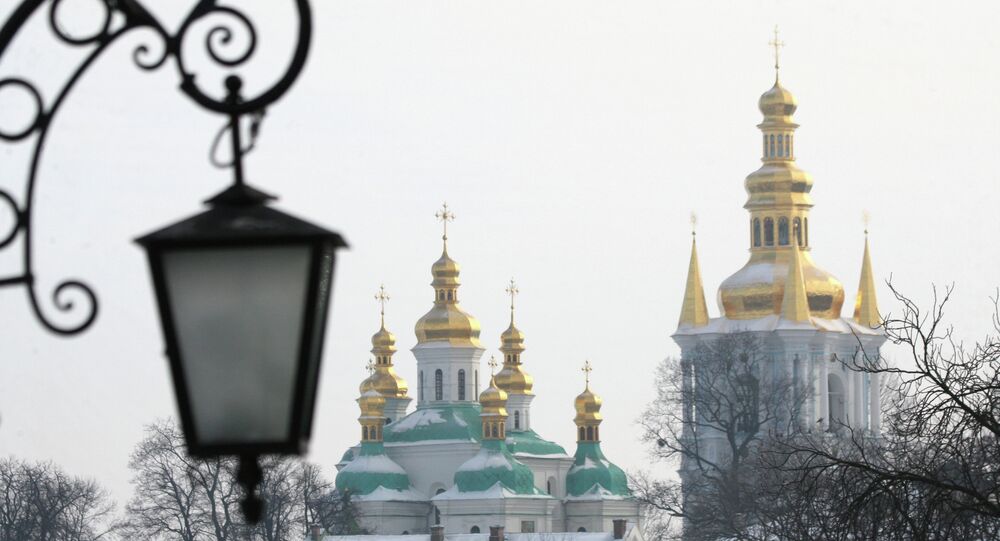 MOSCOW (Sputnik) - Ukrainian politicians should be prevented from interfering in matters dealing with the church as well as from pushing their own agendas since the church was not a political organization, Archbishop Theophilos of Sebastia from the Greek Orthodox Patriarchate of Jerusalem told Sputnik.

"Ukraine's politicians should not be allowed to interfere in the affairs of the church. Politicians cannot impose their agenda on the church since the church is not a political organization; it is an organization that delivers a message of faith to the world, and faith should be accompanied by noble moral, human, spiritual values," he said.

The archbishop, who plans to take part in an international conference in Moscow organized by the Russian Council of Muftis and the Lebanese embassy on September 5, considers the Ukrainian Orthodox Church issue to be a political one because politicians guided by their own interests interfere in church affairs.

The Greek Orthodox Patriarchate of Jerusalem, as well as other Orthodox churches, consider Ukraine to be a canonical territory belonging only to the Russian Orthodox Church (ROC), Archbishop Theodosios of Sebastia said.

"Orthodox churches of the world, including the Patriarchate of Jerusalem, recognize only the authority of the ROC in Ukraine, represented by Metropolitan Onufriy, who is a member of the ROC Holy Synod… The Ukrainian Orthodox Church has been always a part of the Moscow Patriarchate from both administrative and ecclesiastical points of view, and the metropolitan of Kiev and all Ukraine has been the ROC's domain until now," he stated.

He went on noting that any decision of the Ecumenical Patriarchate of Constantinople on the status of the Orthodox Church in Ukraine must be taken in coordination with the Russian Orthodox Church (ROC) and its head, Patriarch of Moscow and All Russia Kirill.

"We are striving for a unified Orthodox Church in Ukraine by way of peaceful and legal methods, through coordination and consultations between Orthodox churches, first of all with the Moscow Patriarchate… Any decision of the Ecumenical Patriarchate of Constantinople on the status of the church in Ukraine must be taken in coordination Patriarch Kirill, the head of the ROC and with the Holy Synod," the archbishop explained.

© Sputnik / Stringer
Politics Out of Religion: Polish Orthodox Bishops Reject Kiev's Bid for Self-Rule
In response to the appeal of the Ukrainian secular authorities, the Synod of the Patriarchate of Constantinople stated that it had decided to be in close contact with other sister Orthodox churches for their information and coordination on this request.

Patriarch Kirill of Moscow and All Russia will meet with Ecumenical Patriarch Bartholomew of Constantinople in Istanbul on August 31, and the sides may touch upon the situation with the church in Ukraine.

Ukrainian President Petro Poroshenko is trying to achieve recognition of non-canonical institutions and to create a single local autocephalous church based on them. In April, Poroshenko said that Ecumenical Patriarchate of Constantinople was launching the procedures required to establish the Autocephalous Church in Ukraine.