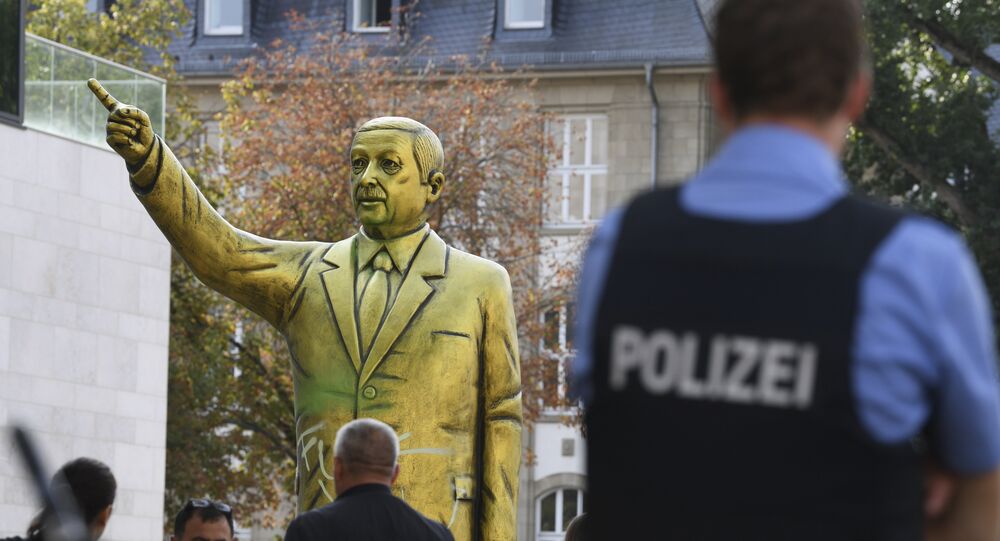 The golden figure of the Turkish president, copying the posture of an infamous monument of Saddam Hussein, appeared unexpectedly in the German city of Wiesbaden, puzzling police and driving some online users mad. Some put their rage into action, painting curse words and a penis on the shining figure, which turned out to be a part of an art fest.

The capital of the German state, Hessen, is making headlines nationwide thanks to the latest addition to the city’s panorama. A golden effigy of Turkish President Recep Tayyip Erdogan was erected on one of the city’s squares on August 27. The shiny statue of the politician points his right hand up, resembling an infamous monument of the late Iraqi leader Saddam Hussein.

This installation created by the Wiesbaden Biennale art festival, which ends on September 2 under the motto "Bad News," has triggered discussion in the city and across Germany, where Erdogan has been criticized by politicians and activists for his human rights record and perusing opposition.

Shortly after the statue was unveiled, it became a topic of heated discussions online, with people leaving comments like, "Is that art or can it go away?", "Must it be a bad joke?", and "That's definitely fake! I can’t imagine that such a thing is approved,"as the local outlet Wiesbaden Kurier reports.

A local police spokesperson told the Wiesbaden Kurier that they “were as surprised as the rest of Wiesbaden," and told the media that there had been problems on the site "from a police point of view" the night after the monument was presented to the public. The words "F*** you" and a penis appeared on the statue.

​However, later in the day, a man who described himself as a Turkish Kurd sprayed the letters  unrecognizable.

"This swear word can certainly lead to the escalation of the situation. Even if I'm not Erdogan’s supporter myself, that's not okay. I would also remove it if that was a statue of Angela Merkel," the man told the media.

The police are keeping an eye on the situation on-site. The city authorities recently held a special meeting, according to Wiesbaden Kurier, and decided to let  the statute stand till the end of the biennale. According to Mayor Sven Gerich (SPD), during heated debates, politicians had concluded that the concrete statue weighing 2.5 tons was "not a political demonstration," and "can be tolerated within the framework of artistic freedom."

He admitted that the city has permitted a general human statue at the central Wiesbaden square during the biennale, but the authorities had no idea that it would be Erdogan. The biennale’s curator said that they deliberately did not reveal the identity of the statue in advance.

WATCH Picture of Erdogan Burnt During Protest in Germany

Berlin Explains Why 'Erdogan is Using Germany as External Enemy'