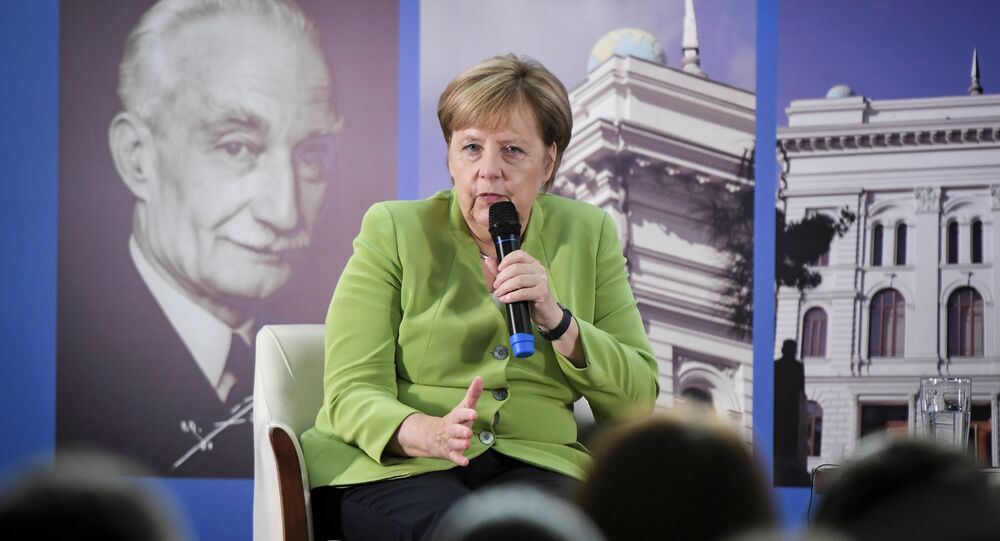 Angela Merkel’s unprecedented trip to the South Caucasus, where she visited Georgia, Armenia and Azerbaijan has triggered heated discussions in the German media. While Baku may help to reduce German dependence on Russian gas, Berlin aspires to assist the peace process in several former Soviet republics, embroiled in a long-lasting conflict.

The German chancellor has rounded out her trip the South Caucasus by visiting Azerbaijan and meeting the country's president Ilham Aliyev. The two leaders discussed developing closer economic relations, in particular building a gas pipeline from the Caspian Sea to Europe, to diversify energy imports on the continent.

During her visit to Baku, the German chancellor and the Azerbaijani President highlighted the importance of this Caucasian republic as an EU gas supplier. While Aliyev signaled that his country is willing to expand energy cooperation with Europe, according to the German outlet Die Zeit, Merkel stated that the EU wants to become less dependent on Russian fuel. As the German newspaper stated, gas supplies from the Asian gas giant Turkmenistan via Azerbaijan remain in question. The construction of a pipeline on the bottom of the Caspian Sea needs the consent of the countries around it. Die Zeit pointed out that the problem is Russia, which allegedly has no interest in creating competition for its own gas.

Both leaders also voiced their support for strengthening economic relations between Germany and Azerbaijan. However, in contrast to the governments of Georgia and Armenia that Merkel had visited before coming to Baku, Aliyev described relations with the EU as sufficiently narrow.

Before the visit, German government circles, as cited by the Frankfurter Allgemeine Zeitung, named Azerbaijan an economically and politically interesting partner for Berlin.

Merkel also offered German assistance in resolving the long-standing conflict over Nagorno-Karabakh. The dispute over the area, inhabited by ethnic Armenians and reclaimed by Yerevan, but belonging to Azerbaijan, has been the stimulus behind hostility between the two countries since the collapse of the USSR. During the the German chancellor's visit to Armenia before going to Azerbaijan, Armenian Prime Minister Nikol Pashinyan, appointed only this spring, told Merkel that Armenia was ready for a peaceful settlement to the conflict.

As the German outlet Frankfurter Allgemeine Zeitung stressed, Merkel was the first German head of government ever to pay an official visit to Armenia, where she praised the results of the so-called "Velvet Revolution” that secured a non-violent transition of power there this spring.

The firts stop on her South Caucasus trip was Georgia, which also saw its own velvet revolution more than a decade ago and has expressed a desire to join EU and NATO. Merkel, repeatedly asked about it in Tbilisi, dampened these hopes, but promised all three states closer economic integration with the EU, although she praised the progress the country has made on the road to democracy, pointing out that Azerbaijan was "not yet ready" like Georgia.

The Frankfurter Allgemaine Zeitung pointed out before the visit that the German government seemed to be aware that “it can no longer underestimate the geopolitical importance of the region, especially as a strategic outpost to Iran and Central Asia.”

While the German Radio outlet compared Merkel’s trip to “a walk  through a minefield taking into consideration politics and diplomacy,” Suddeutsche Zeitung described the tour as a diplomatic challenge.

An author from Die Welt interpreted the South Caucasus trip as Merkel’s attempt to demonstrate that Europeans don’t want "Moscow to freely manage its backyard" and  even deemed the visit a “signal to Russian President Vladimir Putin.”