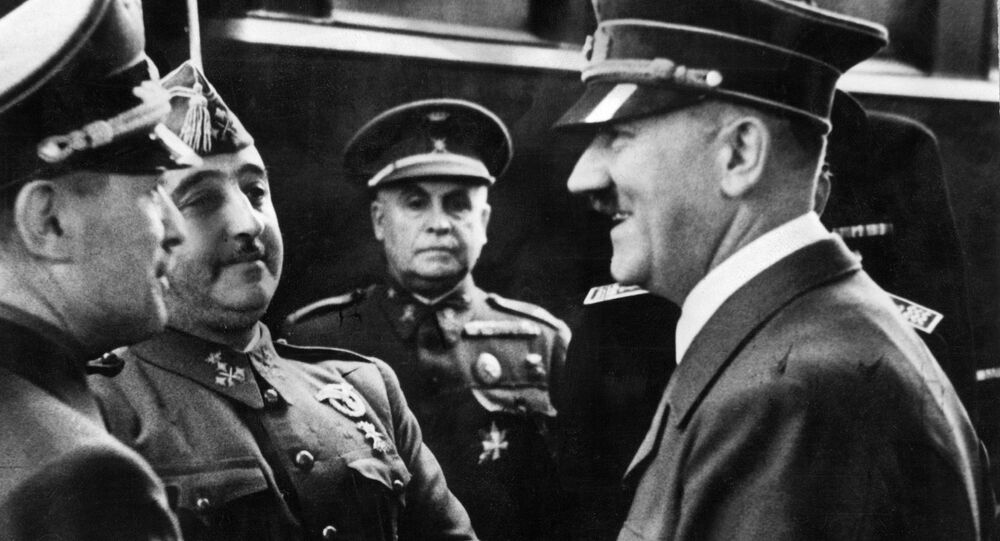 Spain's government approved provisions to a law allowing the exhumation of one of the country's most controversial leaders. The motion is set to spark indignation from both supporters and detractors of the provisions.

The Spanish government's center-left party, the Spanish Socialist Worker's Party (PSOE), is set to pass amendments to the Law of Historical Memory [52/2007] in an upcoming debate next month, deputy prime minister Carmen Calvo said at a press conference at the Palace of the Moncloa on Friday.

"Having Franco's tomb (at the complex) shows a lack of respect […] for the victims buried there," Calvo stated, citing a visiting United Nations delegations remarks that "democracy is incompatible with a tomb which honors the memory of Franco."

Calvo noted that the Spanish government will contact Franco's descendants and give them fifteen days to nominate a place to transfer the remains after exhumation. In the absence of a response, the government will choose what it calls a "dignified place", she said at a weekly Cabinet meeting.

Calvo stated that the government wishes to speed up the exhumation to "end a state of affairs which cannot go on any longer." The Law of Historical Memory was approved in 2007 and given numerous consultations, including expert recommendations in 2011 and a mandate issued to the Congress of Deputies in 2017.

The motion had been introduced to the lower house and deputies voted 198-1 in favor in May 2017, El Pais reported. 140 deputies from the Conservative Popular Party (PP) abstained.

"There's not a single reason that Spanish democracy does not feel worthy of this exhumation," Calvo asserted.

Others have seconded her stance, with Spanish prime minister Pedro Sánchez making his own statement.

"A country looking to the future must be at peace with its past," he said on Twitter. "We are going to exhume the remains of Franco with all the guarantees and listen to other parliamentary groups. The government is acting serenely to restore dignity to the victims of Francoism and to democracy."

The law was first introduced by the PSOE and grants the Spanish government powers to exhume Franco's body, but the new provisions will limit the ability of his descendants to challenge the transfer in courts.

"[The] exhumation will be subjected to administrative authorization from competent authorities, in which they should ponder the existence of opposition from any of the direct descendants of the people that must be removed," the law originally stated.

Spanish citizen on both sides of the argument have taken to Twitter, offering a mixed flurry of comments and opinions.

User Manuel Llamas scoffed at the idea. "[They are] deluded who think that, once they unearth Franco (if they get it), that the left will forget the Civil war. Quite the opposite," he tweeted.

"After the dictator, he will request the exhumation of his lieutenants, annulment of sentences, repeal of amnesty… There will be no end."

"Those who oppose the exhumation of a dictator Lord of death and pain are against full democracy," Christina Fallaras exclaimed. "Today is a day to celebrate, comrades #PSOE."

"Calvo assumes that the exhumation process will be ‘long.' It's a relief. For a moment we came to fear that we would only talk about Franco this week," he chided.

Some could not resist poking fun at the situation. "[For] Franco's exhumation, the best destination is the Santiago Bernaéu Stadium," one user jested, referencing the traditional home of football team Real Madrid.

Pablo Casado yesterday in Menorca: "The exhumation of the one who governed long ago, happily in the past… "Did he govern? How easy was it to just say "murderer, criminal, dictator, genocidal…"

At the time, the Popular party leader was lashing out at the government decision to exhume Franco's remains.

"The government is more interested in resurrecting ghosts of the past than to imagine a better future," Blanco lamented. "We will not let them get rid of the best history of Spain, the reconciliation of the transition, the embrace and the Covenant."

The Valley of the Fallen (Valle de los Caídos) memorial is a massive complex located at the San Lorenzo de El Escorial nearby Madrid.

It was built by the Franco dictatorship to honor victims of the 1936-1939 civil war, which unseated Spain's democratic government. Falangists often referred to the coup d'etat as a "glorious crusade".

The Falangist government began its construction in 1940 and inaugurated in on April 1, 1959.

The remains of around 34,000 victims from both sides of the war are buried there, with many of them unidentified. Removing the late dictator's remains has remained a controversial topic since the leader's death in 1975 at age 82.