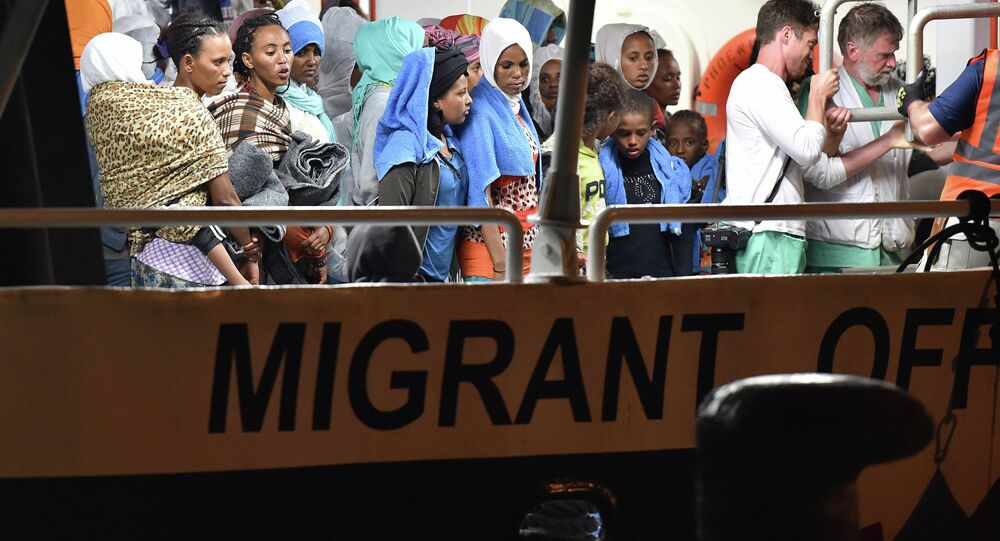 A public backlash against the arrival of hundreds of thousands of seaborne newcomers in the past five years helped bring to power the new Italian government, which has made the fight against illegal migration one of its top priorities.

Italian Deputy Premier Luigi Di Maio warned on Thursday that Italy could stop making financial contributions to the EU budget next year unless other member-states agreed to take in migrants stranded on a coastguard ship in Sicily.

"If tomorrow nothing comes out of a European Commission meeting on redistributing migrants from the Diciotti ship, the 5-Star and I will not be willing to give 20 billion euros each year to the EU," Di Maio said in a video posted on Facebook, adding that he was saying this as the head of the Five Star movement.

"The soft line does not work, the hard line will be to withhold funds if they don't listen to us," he said on Italian television on Friday.

Responding to this, the European Commission said on Friday it will follow rules governing migration, rather than bow to threats:

On August 15, the Italian coastguard ship Diciotti plucked out 177 migrants from a distressed boat in Malta’s territorial waters.

© REUTERS / Yara Nardi
'Italy Cannot Host All Migrants Coming as Asylum Seekers to Europe' – Professor
The Italians contacted the Maltese authorities asking for permission to bring the rescued migrants to one of the island’s ports. After Valetta refused to take them in, the Diciotti spent five days outside the Italian port of Lampedusa waiting for a pertinent decision from Rome.

It wasn’t until Monday that the refugees were eventually brought to Sicily. However, Deputy Prime Minister and Interior Minister Matteo Salvini refused to let them come ashore and demanded that they are accepted by other EU countries. Italy wants other EU members to accept them.

On Friday, the European Commission will bring together representatives from  12 EU countries, including Germany, Greece, Spain, Italy and France, to see what can be done to sort out the problem.

On Sunday, the Italian foreign ministry asked the European Commission to take urgent measures to resolve the situation around the Diciotti "in keeping with the principles of division between EU members agreed upon in June 2018 at the European Council with respect to migration flows."

On Tuesday, Matteo Salvini said that the EU countries were not keeping their promise to receive migrants rescued in the Mediterranean.

As an example, he cited the situation in June when a ship from the Italian financial guard and a vessel from the EU’s external border security agency Frontex disembarked 450 migrants in Sicily after six EU countries agreed to accept them, but only France eventually fulfilled its obligations.

On Wednesday, Prime Minister Giuseppe Conte said that Rome is waiting for a concrete decision on the situation around the Diciotti.

"Italy has once again shown its humanitarian face, but it cannot be left alone. We now expect a strong and clear response from the European authorities and an adequate response from other European countries," Conte wrote on Facebook.

The new Italian government has declared the fight against illegal migration one of its priority tasks.