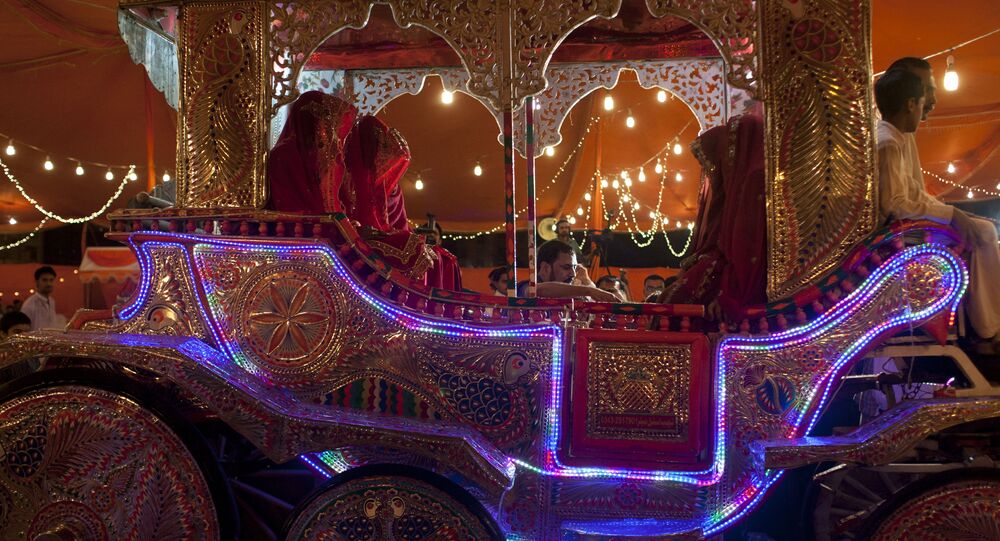 A Pakistani man has been jailed for life for murdering his mother-in-law after she helped his wife escape their arranged marriage in Britain. Sputnik looks at the case, which highlighted the downside of arranged marriages which are common in Indian and Pakistan communities.

Muhammad Tafham, 31, stabbed Ruksana Begum, 46, to death at her home in Rochdale, near Manchester, in February this year.

On Tuesday, August 21, a jury at Manchester Minshull Street Crown Court found him guilty of murder and on Wednesday, August 22, he was sentenced to a minimum of 21 years in prison.

At his trial, Tafham claimed he was innocent and claimed Mrs. Begum had stabbed herself three times in the chest with a bread knife. But she had been stabbed with such force that the knife passed through her breastbone and her heart.

The court heard Mrs. Begum's daughter Aysha Gulraiz, 25, had entered into an arranged marriage with Tafham, who was her cousin, in 2013 despite already having a boyfriend, Malik, in Britain.

The court heard Aysha's father, Gulraiz Sharif, did not consider Malik a suitable partner for his daughter and she only agreed to the arranged marriage in an attempt to placate her father.

In September 2016 Tafham moved to the UK to live with Aysha but she continued to see her boyfriend, who lived in Bradford, and was deeply unhappy in the marriage.

Couple Had To Live Together For Three Years

Tafham did not love Aysha but knew the couple needed to live together for three years in order for him to qualify for a permanent right to remain in the UK under immigration laws.

In February this year things came to a head when Aysha decided to leave Tafham and move in with her boyfriend in Bradford.

Mrs. Begum tricked Tafham into leaving the house and helped Aysha throw a few of her possessions into bin bags before she drove off with her lover.

"Don't ruin your life, go and live it," Mrs. Begum had told her daughter the night before.

Aysha gave evidence at the trial and said Tafham had threatened her on the phone the day after she left him.

"I wouldn't tell him where I was staying and he said 'I'm going to come and grab you. I am going to show you who I am'. He always used to say ‘I have got a feeling someone is going to get killed out of your family'," Aysha told the jury.

Giving evidence during the trial Tafham claimed he arrived at his in-laws' home in Rochdale, heard a "scream" and found Mrs. Begum lying down in the kitchen with a knife in her chest.

He claimed he did not know the emergency services number to phone and fled, believing he would get the blame.

The prosecutor, Andrew Thomas QC, said his explanation was "transparent nonsense" and he wielded the 12 inch kitchen knife and then placed it in her hand as she lay dying in a pool of blood.

"Your lies adopted a tone of pathetic desperation during your trial as you attempted to say, in my view, in a controlling and abusive way, that Mrs Begum had been responsible for her own death," Judge Potter told Tafham.

Every year hundreds of British Asian women and men get wed in arranged marriages with the ceremony often taking place in Pakistan, India or Bangladesh as the groom or the bride awaits clearance from UK immigration authorities to move to Britain.

There have also been many examples in recent years of sham weddings in Europe where EU citizens are paid to marry foreign nationals in order to get immigration papers for the latter.