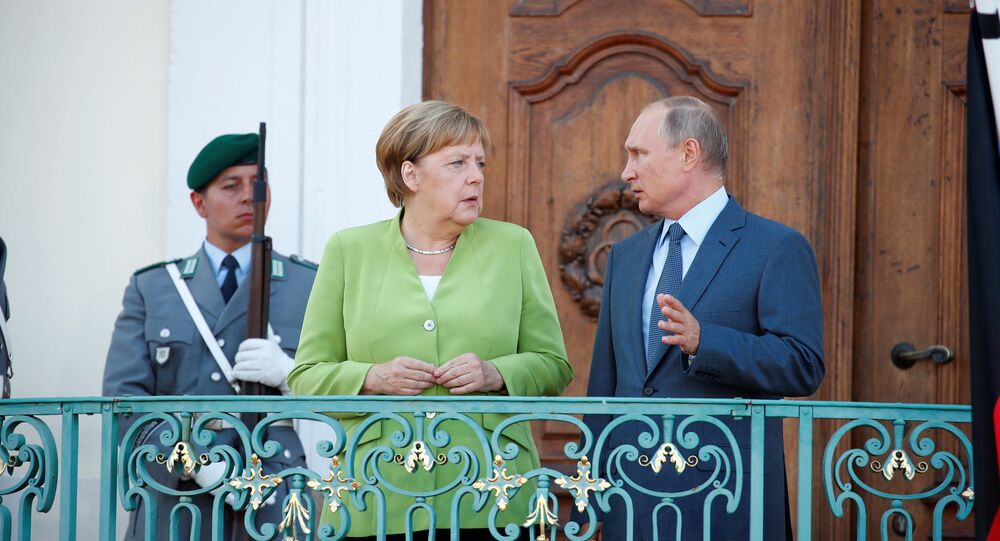 Putin arrived in Berlin from Austria where he attended the wedding ceremony of Austrian Foreign Minister Karin Kneissl earlier in the day.

Russian President Vladimir Putin and German Chancellor Angela Merkel have delivered a joint statement ahead of their meeting in Schloss Meseberg located about 70 kilometers (43.5 miles) north of Berlin.

The Russian and German top politicians said they would discuss the Syrian and Ukrainian crises, as well as bilateral ties, the Nord Stream 2 project and the Iranian nuclear deal.

As Vladimir Putin stated, Moscow was ready to discuss Russian-German relations, as well as trade cooperation with the European country, along with international issues.

"We are ready to discuss Russian-German relations, as well as topical international issues…. We will discuss the current state and prospects of [Russian-German] trade and economic relations," Putin said.

Speaking ahead of the talks, the Russian president emphasized that the Nord Stream 2 was exclusively an economic project and doesn't threaten the gas transit route via Ukraine.

"I would like to stress that the main point is that the Ukrainian transit, which is traditional for [Russia], would meet economic requirements, as well as would be economic in every sense of this word," Putin said.

Merkel, for her part, noted that Ukraine should maintain its role as a transit country even after the launch of Nord Stream 2.

"In the context of Ukraine, we will also talk about gas transit. I believe that even after the launch of Nord Stream 2, Ukraine should play its role in gas transit to Europe, and I am very pleased that we managed to start a negotiation process on this topic," Merkel said.

The Russian president reminded that Russia had always been a reliable supplier of gas to Europe and had made and is making its significant contribution to the energy security of Europe.

"June marked the 50th anniversary since the beginning of gas supplies from the Soviet Union to Western Europe. Over the whole period, our country has been reliably providing uninterrupted energy supplies, has made and is making a significant contribution to the energy security of the entire European continent," Putin said.

As he stated, energy is one of the priority areas of cooperation between Russia and Germany, adding that these volumes covered more than 30 percent of the German market.

"One of the priority areas [for cooperation] is energy. It is well known, Germany is the largest buyer of Russian energy resources. In 2017 alone, we supplied 53.8 billion cubic meters of gas… Consumption of Russian gas is constantly growing and this year, it increased by 13 percent," Putin said.

"We will discuss the situation around the Joint Comprehensive Plan of Action for the settlement of the Iranian nuclear program. It is extremely important to preserve this multilateral agreement approved by the UN Security Council and aimed at strengthening regional and global security and the nuclear non-proliferation regime," Putin said.

"We, of course, will talk about Iran, we want to preserve the JCPOA, but we are following Iran's activities with concern, be it the missile program or the situation in Syria," she said.

German Chancellor Angela Merkel asserted that she saw positive developments in Syria and noted the importance of preventing a humanitarian catastrophe in the country.

"An important topic, of course, will be Syria. We, of course, should, first of all, avoid the humanitarian catastrophe around and in this country. We are seeing a decrease in hostilities, but this does not mean that we have a peaceful situation there," Merkel said.

At the same time, Putin called for provision of support to those Syrian regions, which can experience a return of refugees, including from the European countries that suffer from the overflow of migrants.

"We will discuss the situation in the Middle East, primarily in regards to Syria. It is important to develop the humanitarian component of the Syrian conflict, meaning, first of all, the provision of humanitarian assistance to the Syrian people and help to those areas where refugees from abroad can return," Putin told reporters.

The Russian president noted that even though most refugees returning to Syria come from Jordan and Lebanon, both of which host a million of them as well as Turkey that hosts three million, such situation puts potential pressure on Europe.

"To help in restoration of most basic things: water supply and sanitation, revival of medicine. I think everyone is interested in it, including Europe," Putin underlined.