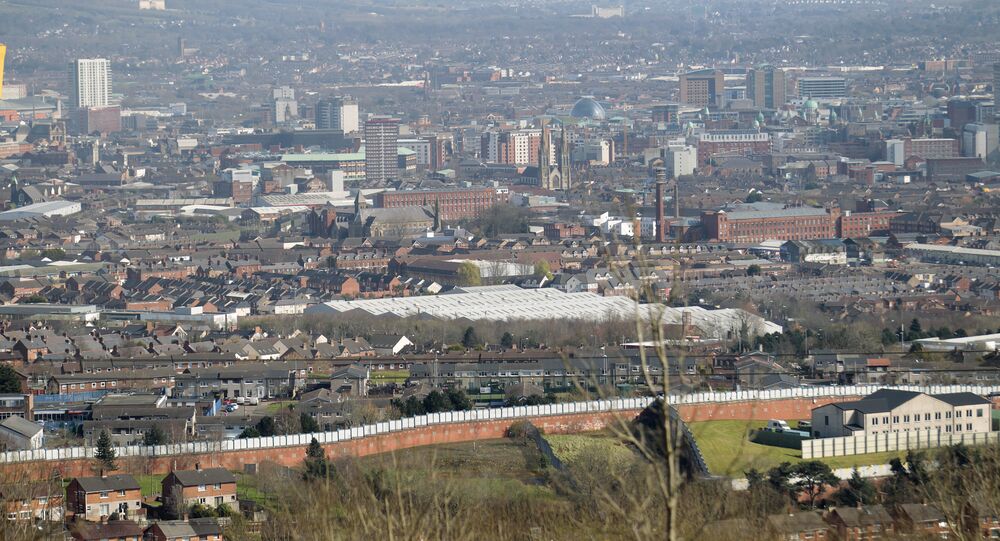 The poster, circulated in the capital of Northern Ireland, has prompted scores of comments from enraged internet users, along with a local councilman. It was erected a month after several days of violence in Derry on the eve of a major Protestant celebration.

In Northern Ireland's capital Belfast, where internal barriers known as 'peace walls' continue to divide local Protestant and Catholic communities, a divisive poster has appeared which features a diagram of a human brain, with arrows pointing at what are understood to be the stereotypical thoughts of Northern Ireland's Protestant community.

Who is responsible for circulating and pasting this poster up in the Cathedral Quarter of Belfast.

It stereotypes Protestants', takes a simplistic outlook and above all promotes hate.

They should be removed with immediate effect. pic.twitter.com/DyyL0ECRty

The poster features slogans such as "Save Ulster from Sodomy" and "F*ck the Pope." Another label, "The Sash my Father Wore," is a traditional loyalist song that commemorates Protestant King William's victory over the Catholic King James in the Williamite War in 1689-1691, which secured British and Protestant rule in Ireland for over two centuries.

The call to "Kill all Taigs" contains a derogatory term for Northern Irish Catholics, used by some Ulster Protestants.

The brain on the poster is colored red, white, and blue in an apparent reference to the Union Jack flown by Northern Ireland loyalists, who typically vote for the region to stay within the United Kingdom rather than become part of the Republic of Ireland.

It has sparked the outrage of Democratic Unionist Party (DUP) councilor Graham Craig, who blasted it as "offensive and derogatory." "I have asked the Council to remove it and contacted the police to report it as a hate crime," he told the Belfast Telegraph.

Internet users also decried the image, with some people branding it a "hate crime" and "naked sectarianism."

That makes my blood boil. It's naked sectarianism.

Certainly should be removed if it really exists. It is incredible if any people support such rubbish

Others called for a "Republican Catholic" poster to strike a balance.

I think its funny! Lets do a republican roman catholic one! Although the head would need to be absolutely enormous to fit in every stereo typical trait these clowns have

Last month, street violence broke out in Northern Ireland's second-largest city, Derry, ahead of a Protestant parade that celebrated July 12, a holiday marking King William's victory over King James in the Battle of the Boyne in 1690.

After hundreds of years under British rule, in the early 1920s the Republic of Ireland split from the UK to become an independent state. However, the predominantly Protestant north of the country remained an integral part of the United Kingdom. To this day, the population of Northern Ireland remains divided between those who wanted to remain within the UK (unionists/loyalists who were mostly Protestant) and those who wanted to leave the UK and become part of a united Ireland (republicans, mostly Catholic).

In the second half of the 20th century, Northern Ireland was in the grip of a decades-long conflict between loyalists and republicans. Although the Good Friday Agreement of 1998 brought an end to the period of conflict, setting up a power-sharing government in Northern Ireland, tensions between Protestant and Catholic communities still persist, sometimes leading to outbreaks of violence.