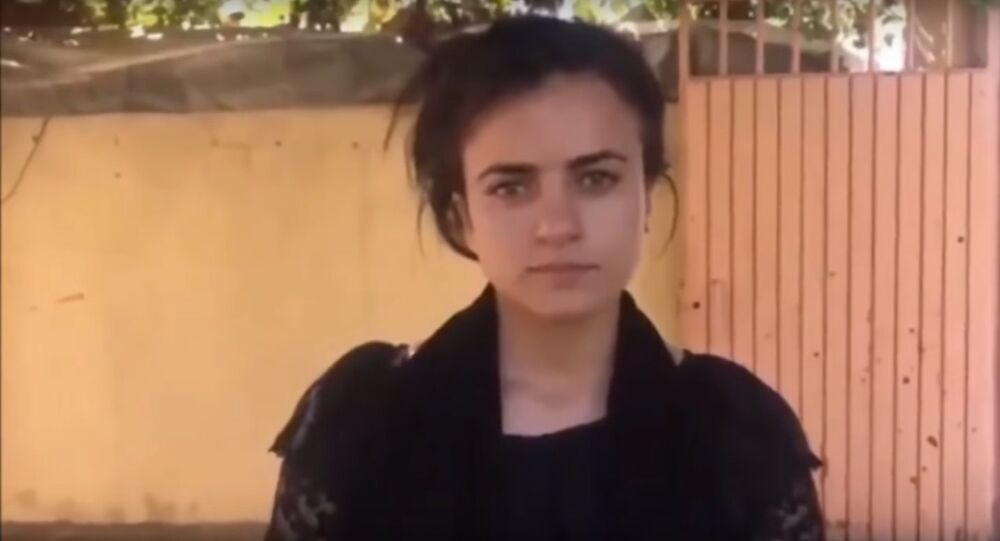 A teenage Yazidi girl previously sold into slavery by Daesh while in her home region of Kurdistan who later escaped from captivity, has now fled Germany after twice encountering her captor there and losing hope the police will do anything about it. She has shared the details of her hair-raising experience in an interview with Sputnik.

Ashwaq Ta’lo was just 15 when her entire family was taken over the nearby border into Syria around the time of a Daesh* attack on Mt. Sinjar, the heartland of the Yazidi people, a Kurdish ethnic group, in northern Iraq four years ago. Ashwaq, together with her sister and other young women were then taken back to Iraq.

There Ashwaq was auctioned off, as were most of the other Yazidi women, and sold to a man she knew as Abu Humam, who she lived with for three months under constant abuse.

"I was with him for three months. He then sold me in Iraq. After that, having lived all my life in Iraq, I left home, so I can forget the man. And I never thought that I would see the man in Germany," Ashwaq told Sputnik.

She managed to give her captors the slip as a refugee to Germany, where she finally reunited with her mother and other members of her extended family. However, one day in February, as she was returning home, she was stopped in the middle of a Stuttgart street by a man she identified as Humam, though thinking it was impossible, since Daesh were believed unable to enter Germany:

"I also told my mother that I saw a man who looks like the IS [Daesh*] man. My mom said: ‘You must not be afraid, he is not here. There is no IS [Daesh*] in Germany’,” Ashwaq told Sputnik.

On February 20, 2018, Ashwaq embarked on an internship in a hairdressing salon. The following day, at midday, most shockingly, the man, who was also reportedly seeking asylum, was back, but this time he addressed her directly:

"He came up to me and said: May I ask something?", The young woman recalled. "And I said: sure. And I already knew that he was the man. He said: You are Ashwaq. I said: No, I'm not Ashwaq, who are you? He said, yes, you are Ashwaq and I am Abu Humam,"  the Yazidi girl shared. She went on to say he spoke to her in Arabic, although she repeatedly claimed in German that she did not understand what he was saying, however, she noted he further said he was sure she was indeed Ashwaq.

“I know where you live, who you have been living with since you came to Germany and which school you are going to,” the Yazidi girl cited him as saying, noting that he apparently knew “her whole life in Germany.”

She reported the incident to her social supervisor in Germany and later to the chief of police in Waiblingen, in the Stuttgart Region.

"They gave me a number and said: If you see this man again, you have to call us," Ashwaq said.

She saw her former captor twice, and the police even came up with a picture of the perpetrator, while however, “doing nothing” about it. "Then I waited a month and a half. They didn’t do anything, " the girl said. She also quoted her school teacher as saying: “If Iraq is better for you, then go, if not, then stay and we'll take care of you.”

'Won't Go to Germany Any More'

Ashwaq finally opted to return to her home country, and take a chance and see four of her sisters who had by this time been released from captivity.

According to German social services, the girl can stay in Iraq for up to six months, before returning to Germany, and if this time expires her refugee status in Germany will no longer apply. The girl, however, is sure she will never go back to Germany, however dire the conditions are back home.

"Whatever happens, I won't go there any more," she stressed.

She, however, deemed it important to thank all those who sympathized and took care of her there.

"When I told my siblings and my dad, my dad said he does not want me to go back to Germany where this man is," said the young woman, who has been in Iraq for almost four months now.

No Less Dangerous at Home

She admitted that Iraq is still very dangerous, where out of her extended family of 77, 36 family members have been freed, but “41 are still in captivity, and we have no contact at all,” she said, adding that her former captor's family was also reportedly in Iraq, in Baghdad.

"I am so scared, we have to leave Iraq, but not for Germany," Ashwaq noted.

Instead, she is now floating the idea of traveling to Australia, where two of her brothers and a sister have already settled, and subsequently take her entire family there.

Back in Germany, Ashwaq’s case is currently being looked into by Karlsruhe’s federal prosecutor, however, with little headway at the moment.

"So far, we have not been able to identify the perpetrator with the required security number," a spokeswoman for the Federal Prosecutor told Sputnik.

The Yazidi Kurds are an extremely vulnerable group in Iraq, frequently reported to be captured, enslaved and sexually abused by Daesh, prompting Germany to accept as many as 1,100 Yazidi women back in 2016 as refugees. The UN has declared the killing of the Yazidi people by Daesh as genocide. Earlier this year, however, German intelligence chief Hans-Georg Maassen warned of the imminent danger posed by women and children returning “brainwashed” from Daesh-occupied regions, adding that minors as young as nine years old should also be controlled and surveilled.

*Daesh— a terrorist group, banned in many countries, including Russia.