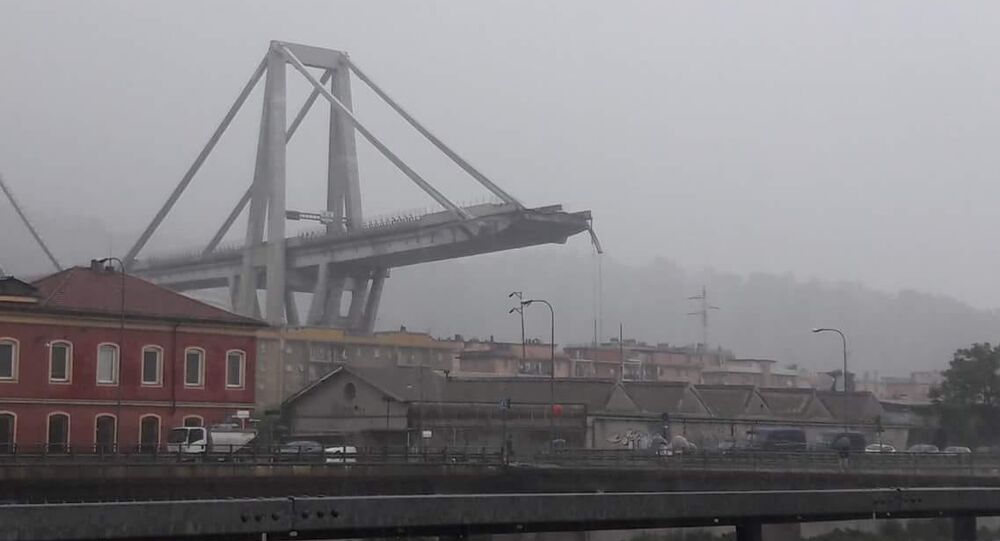 Morandi Bridge in Genoa collapsed on August 14, claiming the lives of almost 40 people and injuring many others. The reasons behind the collapse have not been yet established, but the Italian government has accused maintenance company Autostrade of failing to ensure the safety of the bridge.

Italian Deputy Prime Minister Matteo Salvini from the party Lega has scolded the EU policies that prevented the country's government from spending more money on repairs for ageing motorways and infrastructure. According to him, if not for the limitations imposed by the European Union on spending, Italy would have invested more in the restoration of its roads and bridges.

"Many motorways need maintenance, but often we are told we cannot spend money because of European constraints — limits, deficits, the GDP, debt," Salvini said.

The leader of the Eurosceptic party Lega also questioned the sanity of following such rules and limitations at the cost of citizens' lives.

"If external constraints prevent us from spending to have safe roads and schools, then it really calls into question whether it makes sense to follow these rules. There can be no tradeoff between fiscal rules and the safety of Italians," he said.

Salvini also promised to find those responsible for the disaster and punish them, saying they will "pay a lot."

READ MORE: State May Have to Take Over Italian Motorways After Bridge Collapse — Deputy PM

In an interview with AP, EU spokesman Christian Spahr, hinted that Salvini's words weren't entirely correct. According to him, the European Union has transferred around €2.5 billion to Italy to boost network infrastructure, including roads under the 2014-2020 EU budget plan. He also added that back in April the EU had approved an investment plan that included spending €8.5 billion on Italian roads.

"In fact, the EU has encouraged investment in infrastructure in Italy," Spahr said

Several sections of the 50-year-old Morandi Bridge in Genoa collapsed on August 14. The incident claimed at least 39 lives and left many injured. The reason behind the collapse has not yet been determined, but some of the documents leaked online have alleged the bridge was in need of urgent repairs.

Italian PM: No Doubt Contractor Was Responsible For Ensuring Safety of Bridge