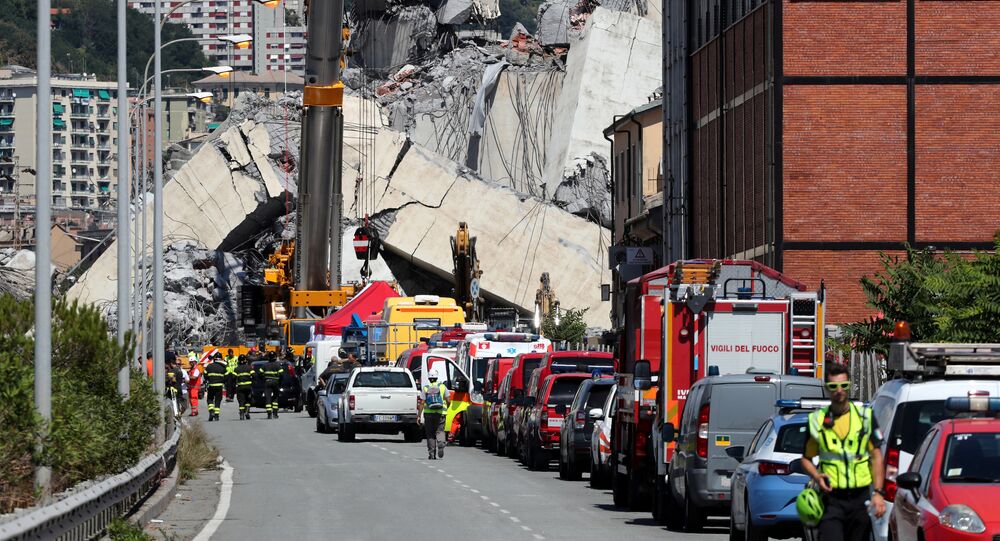 Rescuers have said there is little hope of finding more survivors in the rubble of the Morandi Bridge in Genoa, which collapsed on Tuesday. Sputnik looks at the design of the bridge and why it calls into question several similar structures around the world.

The Morandi Bridge — sometimes known as the Polcevera viaduct — collapsed during a thunderstorm on Tuesday, August 14,

The concrete structure crashed down on a river, two roads and railway tracks in the center of the Italian city of Genoa, killing 39 people.

There has been speculation that a bolt of lightning might have hit the bridge but Agathoklis Giaralis, deputy director of the University of London's Civil Engineering Structures Research Center, said that was highly unlikely to have been the cause.

Might now be a wee worry about crossing similar bridges by the same engineer, Ricardo Morandi? pic.twitter.com/EFp3jEXA74

But Valeria Passetti, an Italian architect and honorary consul, said she did not want to speculate on such a "terrible tragedy".

"Let's wait for the results of the (public) inquiry and hopefully we will know the truth," Ms. Passetti tweeted in response to a query from Sputnik.

Death Toll Due to Rise in Genoa

Around 20 people are missing, with the death toll expected to rise over the next few days.

The Morandi Bridge — named after its designer, Riccardo Morandi — was part of the A10 autostrada, or motorway, which links Genoa with the French border at Ventimiglia.

It crossed the river Polcevera between the suburbs of Campasso and Coronata and also spanned the railway which runs through Genoa.

Construction began in 1963 and the bridge opened four years later at the same time as the A10 between Genoa and Savona.

Morandi, who died in 1989, also designed a number of other similar bridges which used prestressed concrete, rather than steel cables, to hold them up.

Libyan Lookalike Bridge Has Been Closed

Among those he built in a similar style to the bridge in Genoa were the Wadi el Kuf bridge in Libya, which opened in 1972.

In October 2017 Libyan officials closed the bridge after inspectors identified a number of potential fatal fractures.

Now the focus is likely to switch to the Carpineto Bridge, near Potenza in the Italian state of Basilicata, which looks alarmingly similar to the Genoa structure.

Despite studies that Genoa’s Morandi Bridge risked collapse, local 5Star leaders said it was “a fable.” Argued against upgrading at Genoa council. Giovanni Calvini, local biz boss, 2012: “In 10 years Morandi Bridge will collapse … we will remember names of who said ‘no’”

There will also be alarm bells ringing in Venezuela, which is home to Morandi's largest and most ambitious structure, the five mile long General Rafael Urdaneta Bridge which crosses Lake Maracaibo.

Another of his designs, the Pumarejo Bridge in Colombia, is about to be replaced. It was unpopular almost from the time it opened in 1974 because it constricted navigation of the Magdalena River, which it crosses.

Morandi also designed a number of other structures — including the, the Ponte Amerigo Vespucci in Florence, the Great Storms River Bridge, in South Africa, the Kinnaird Bridge in Canada and the National Unity Bridge in Ecuador — although these were not of the same design as the one which failed in Genoa.

In the 1960s Morandi designed the Fiumarella viaduct near Catanzaro in southern Italy, which ironically replaced a bridge which had seen a tragedy — 71 people were killed when a train derailed and plunged into the valley below.

I'm seeing "failure of engineering" as the reason for the Morandi Bridge collapse.

Engineers told policy-makers the 50-year old bridge was unsafe. The decision to keep an unsafe bridge in operation is policy and politics, not engineering.