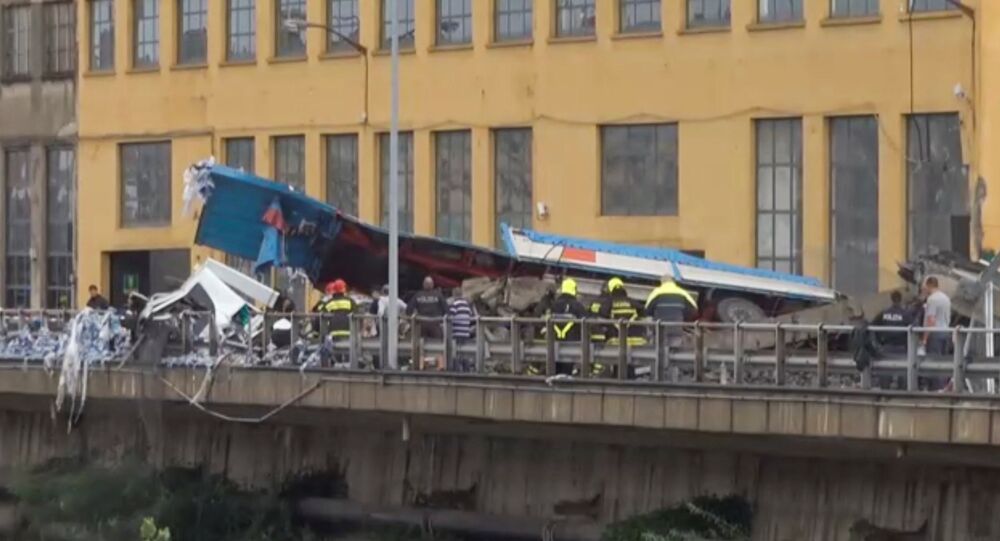 Italian PM: No Doubt Contractor Was Responsible For Ensuring Safety of Bridge

The bridge was constructed in the 1960s, and, according to a two-year-old document leaked by the unofficial Wikileaks Italy Twitter account, needed massive repairs.

On Wednesday Italian Prime Minister Giuseppe Conte approved a twelve-month state of emergency requested by the Liguria region. The official also added that the company Autostrade per l'Italia was responsible for ensuring the safety of the collapsed bridge because it was stipulated by the concession agreement to do so.

"The meeting of the Council of Ministers has just ended. Almost all members of the government took part, some over the phone, excluding only those who were absent for personal reasons. I am pleased to announce that we satisfied the request of the president of Liguria and introduced a state of emergency for a year," Conte told reporters.

The prime minister added that five million euros had been allocated from the national emergency fund to conduct primary works to eliminate the damages caused by the incident.

© Photo : Ilaria/twitter
Bridge Collapse in Genoa, Italy: What We Know So Far
Earlier in the day, Italian transport minister Danilo Toninelli announced that the government had begun revoking motorway concessions after the bridge collapse in Genoa, adding that it would also seek to impose "significant fines" on the company Autostrade per l'Italia, Atlantia SpA unit managing that stretch of the highway.

The Morandi Bridge in Genoa collapsed on Tuesday, burying dozens of people and cars. According to Italian police, 38 people died and at least 7 sustained serious injuries due to the incident. Over 200 emergency service workers conducted rescue operations at the site.