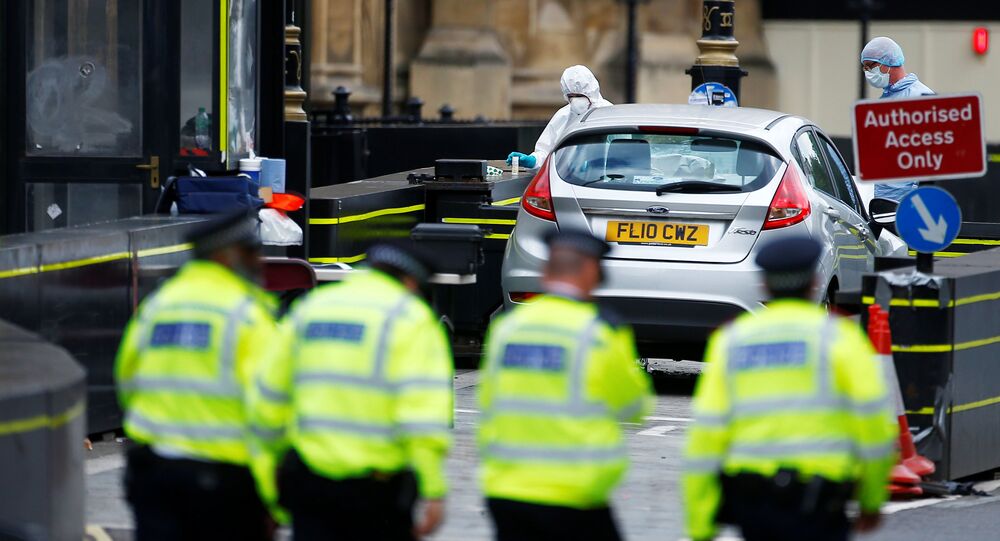 The threat of terrorism is a constant concern for British authorities because the number of attacks increased recently, with the BBC reporting a total of 13 Islamist and four right-wing plots being foiled since March 2017.

According to the Daily Mail, a 29-year-old Sudanese immigrant, Salih Khater, is thought to be behind Tuesday’s terror attack on Westminster when he plowed his car into 15 cyclists outside Parliament, UK media reports said.

Khater, remains in custody in a south London police station on suspicion of terrorist offenses.

© AFP 2021
Al-Qaeda Bombmaker Arrested in London Guilty of Planning Knife Attack on MPs
According to police, Khater veered off the road careering into pedestrians and cyclists, crashing into security barriers outside the Houses of Parliament during rush hour Tuesday morning, injuring several people, the BBC reported.

Salih Khater was alone in the car when it crashed and no weapons were recovered at the scene.

According to eyewitness accounts, the silver Ford Fiesta Khater was driving appeared to deliberately hit members of the public as it swerved into the opposite lane.

Two addresses in the West Midlands were being searched by counterterrorism officers on Tuesday evening, as well as a flat above an Internet cafe in the Sparkhill area of Birmingham where Khater lived.

"Given that this appears to be a deliberate act, the method and this being an iconic site, we are treating it as a terrorist incident," Scotland Yard's head of counterterrorism Neil Basu said.  He added that there was "no intelligence at this time of further danger" to London or the UK as a whole.

Prime Minister Theresa May has condemned terrorists who have attacked Westminster as "twisted" — as the government has reported spike in the number of thwarted plots and live terror investigations.

According to Downing Street, the number of  Islamist terror plots thwarted by police since March 2017 had increased from 12 to 13, with four right-wing plots also stopped during the same period.

British Transport Police said they were increasing patrols in England, Scotland and Wales and that officers would be "highly visible on trains and at stations."

Following the incident, the nearby Westminster Underground station was closed and roads nearby were cordoned off.

Security measures in the area were reinforced after the Westminster Bridge attack in March 2017 when 52-year-old Khalid Masood rammed a rental car onto the sidewalk on Westminster Bridge killing four people and then stabbing an unarmed police officer.