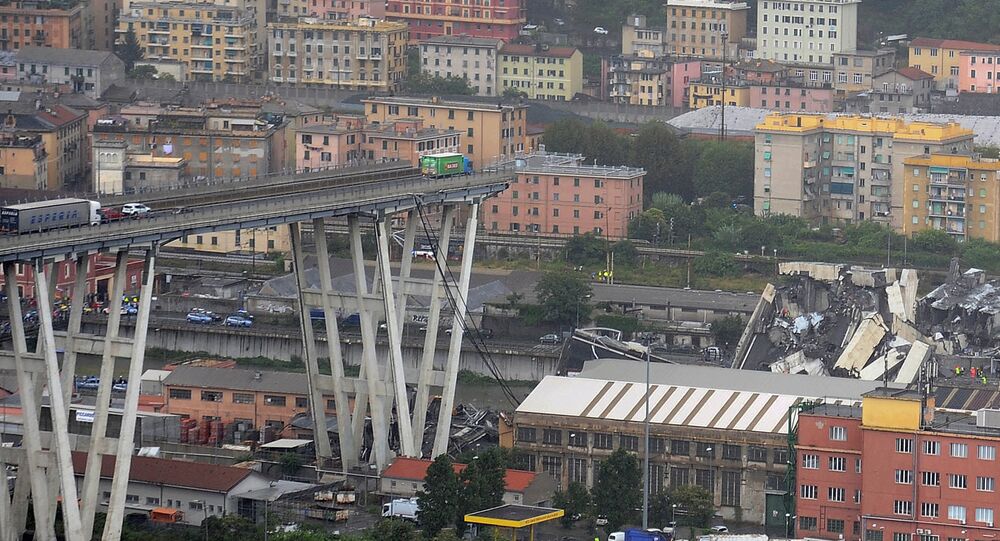 The appeal dated April 26, 2016, made by Senator of Liguria region Maurizio Rossi to the Ministry of Infrastructure and Transport warned about a possible collapse of the Morandi Bridge.

The document leaked by the unofficial Wikileaks Italy Twitter account says that “the bridge has been the subject of a worrying collapse of the joints” urging to “carry out extraordinary maintenance work without which the risk of closing it is concrete.” Sputnik International cannot confirm the authenticity of the document, yet according to the web adress the document was published in the closed archives of senator Rossi's Liguria Civic political movement website. It also states that the Autostrade per Italy who was responsible to the construction of new infrastructure in the Liguria region couldn’t agree with the local authorities on the motorway sections leading to a delay in planned road construction.

READ MORE: Bridge Collapse in Genoa, Italy: What We Know So Far

“If a new road strategy with a broader scope of the Ligurian capital is not immediately prepared […] the possible future total or partial closure of the Morandi Bridge would inevitably lead to the collapse of the entire Genoese road system,” the appeal outlined.

According to Reuters, Italy, the Autostrade Company is now looking into the causes of the collapse. In the statement to the press, the company noted that the bridge was under constant “observation and supervision” by Genoa Motorway Direction with a bridge crane having been installed for the planned maintenance to be carried out. Giovanni Castellucci, Autostrade's managing director, argued that the bridge built back in the 1960s wasn’t dangerous, Huffington Post Italy reported.

Twitter users also speculated about the causes of the fall. They remembered that in recent years there were fears about the bridge’s collapse. One user included photos created by the Google Street View camera showing the underbelly and pillars of the bridge partially crumbled. The note says that the maintenance work had started in March 2016 and were supposed to end in March 2017. Another photo shows the bridge a day before the collapse with visible cracks and wrecked shells.

You can in Google Street View that the #PonteMorandi bridge in #Genova / #Italy received in 2016/2017 some sort of overhaul. pic.twitter.com/njx91npLEH

Dozens of Victims After the Fall

200 meters of the Morandi Motorway Bridge collapsed at around 11:30 on Tuesday, August, 14. The collapse happened during a torrentail rain storm. Several cars plunged into the resultant abyss from an enormous height. About 30 have been confirmed dead by Italian police authorities so far. Italian news agency ANSA cited the Italian officials suggesting that the structural weakness was the prior cause of the fall. The search for survivors continues as an emergency ambulance service spokesman in his comment for Italy’s Adnkronos news agency estimated that dozens of people had perished during the tragedy.

OMG. An aeral view of the tragedy in #Genoa, where a major motorway bridge has collapsed. This is appalling. #Italy
via @belcastrotw pic.twitter.com/jodF6eIUP8