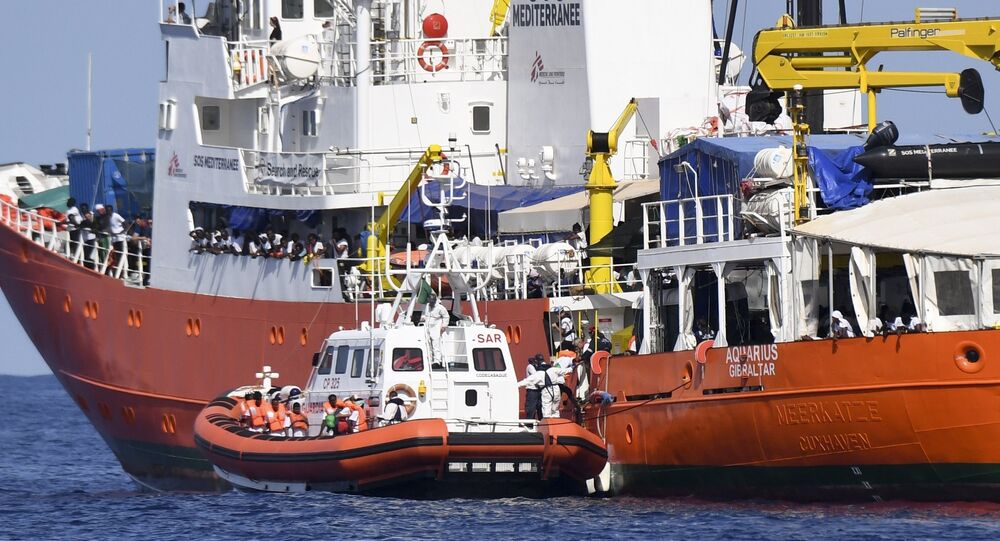 MADRID (Sputnik) - The Spanish government thinks that the Aquarius migrant rescue vessel carrying over 140 migrants should refrain from docking in Spain’s ports as they are far away from the current location of the ship, a source in the government told Sputnik on Monday.

"Spain is not the safest port for this ship, as it is not the closest," the source said adding that "it's not about reluctance to accept the ship," as final decision is yet to be made.

© REUTERS / Stringer
'Aquarius Case' Turned Spain Into Magnet For Irregular Migrants – Italian MP
Italy and Malta have already refused to accept migrants. Italian Infrastructure and Transport Minister Danilo Toninelli said earlier in the day that the United Kingdom should claim responsibility for the Aquarius as it was sailing under the flag of the UK overseas territory of Gibraltar.

Last week, humanitarian non-governmental organizations (NGO) SOS Mediterranee and Doctors Without Borders that operate the Aquarius called on European governments to provide a safe port of disembarkation after the vessel rescued 141 undocumented migrants from the Mediterranean. Currently the ship is in the international waters near Malta and Italy.

In June, Italy and Malta categorically denied entry to Aquarius that had over 600 migrants on board at the time. The Spanish authorities said they were ready to allow the vessel to dock at its eastern port. Some of the migrants were relocated to Italian ships the Orione and the Dattilo, and the three ships eventually arrived in Valencia.

© REUTERS / Siphiwe Sibeko/File Photo
German Minister Calls to Open EU Market to African Goods to Stem Migration
Europe has faced a large influx of migrants fleeing armed conflicts and economic crises in Africa and the Middle East since 2015. Italy and Spain are among the main entry points for migrants arriving in Europe. The Italian government is willing to change this by closing its ports to boats which rescue migrants traveling from Africa to Europe by sea, which has already resulted in a 80-85 percent decrease in number of migrants arriving to Italian shores in two months, according to the country's prime minister.

According to the International Organization for Migration (IOM), over 60,000 migrants have arrived in Europe by sea in 2018, while 1,524 were dead or missing.